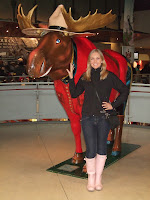 This past weekend, Cam and I had the opportunity to take a little weekend getaway to what some people call America’s hat…that’s right, I’m talking about Canada! Living in Southeast Michigan, the Canadian border is very close, but besides the occasional trip to Windsor, most people my age that I know haven’t spent much time there. However, in my opinion, I feel that people are missing out–Canada is honestly a hidden gem with a lot of great places to discover! Since we started dating, Cam and I have taken 3 trips to our neighbor to the north, and each time, we’ve really enjoyed ourselves.

During our first trip to Canada together two summers ago, we went to Stratford, Ontario, which is only about 3 1/2 hours from Ann Arbor. Situated on the Avon River, Stratford’s main attraction is their Shakespeare Festival, which runs from April-October each year. The festival features works by Shakespeare, as well as other plays and musicals. The town is very picturesque and features lovely gardens and manicured paths along the river, as well as an adorable downtown. If you like Shakespeare and want to have a relaxing weekend in a beautiful setting, then Stratford is definitely worth exploring!

Last July, we had the pleasure of visiting Tobermory, which is 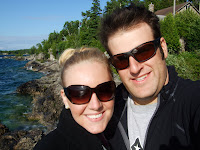 a quaint little town on the northern tip of the Bruce Pennisula in Ontario. To be honest, I had never even heard of the Bruce Pennisula, but Cam had heard that it was a great place to go hiking, so we made the 6 hour drive through the Canadian countryside around Lake Huron. We stayed at a cute little place where they rent out individual cabins, and let me tell you, if you are ever looking for a place to go for a long weekend in the summer, I would definitely recommend it! Much of the northern tip of the Bruce Peninsula is a national park, and there are abundant hiking trails, which overlook breathtaking views of Lake Huron. I was really blown away by just how beautiful it was, the coast is quite rocky with some very large cliffs, it’s really just a gorgeous setting. Besides hiking, there are many other outdoor activities you can try such as kayaking, biking, or just sitting out on the deck of one of the restaurants around the harbor eating fish and chips! We were also able to catch some beautiful sunsets during our weekend here, so if you’re looking for a peaceful, natural, refreshingly untouristy destination, I would strongly recommend checking out Tobermory!

Then this past w 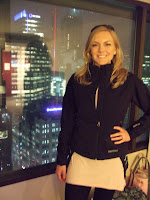 eekend, we visited Canada’s largest city, Toronto! I had only been there once when I was young, and Cam had never been, so with it only being less than 5 hours from Ann Arbor, we thought it would be the perfect destination for one last weekend getaway before things start to get busy for Cam with school. I think we both weren’t sure what to expect, but Toronto is a major metropolitan city with lots to see and do! Unfortunately, it rained most of the weekend we were there, so that was a little bit of a bummer, but we still had a great time exploring the city. We stayed right downtown at the Hilton on the 26th floor, and lucked out getting a room with a perfect view of the CN To 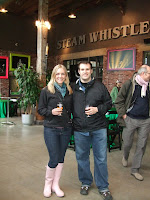 wer! Over the course of the weekend we were able to see many of the city’s attractions including Steam Whistle Brewery, St. Lawrence Market, Eaton Center Mall, as well as going to the top of the CN Tower. We were even able to catch Supercross Race at Rodgers Centre, so Cam was especially happy about that! One of our favorite areas of the city was the Distillery Historic District. This area of town featured unique shops and restaurants on brick-lined streets with historic architecture with lots of modern details, making it a great place to walk around (despite the rain!) On Sunday morning, we were able to have brunch at a great restaurant called The Boiler House, and if you’re ever in Toronto, it’s definitely worth a visit! On the way back from Toronto, we stopped at Niagara Falls for the afternoon, as Cameron had never seen them. Areas around th 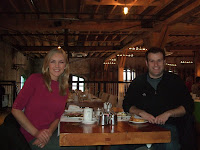 e falls were still frozen, so it was actually a really neat time to be there and see a little bit different side of this landmark. Then on the way home, we stopped in the adorable town of London and had a lovely dinner downtown.

All around, I think that Canada is the perfect place of a weekend away. There are some great destinations that are easy to get to from Michigan, but it really does seem like you’re going much further away. Once you cross the border, the subtle difference in your surroundings such as regal-soundin 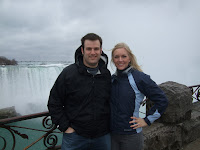 g street signs written in both French and English, help to really transport you, even if you’re only a few hours away from Michigan! So if you’ve got a free weekend, grab your passport, grab some Tim Horton’s, and hit the road!