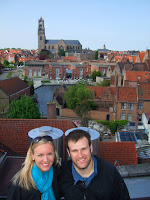 After my London/Paris posts, you might be expecting a lengthy writing about our recent visit to Bruges, Belgium, however, I don’t really have to much to say except that it was lovely! We were only there for one night, and after the jam-packed days of sight seeing in 2 huge cities, it was really nice to be a smaller town. We took the train from Paris to Bruges on Friday morning, and it was very nice to be able to see some of the scenery. We took the bus from the train station to our hostel, and then basically just spent the afternoon walking around the city. It was nice to just relax and enjoy ourselves without feeling too pressured to try to squeeze in a bunch of museums and historical sights. While Bruges does have museums and historical sights, the cool thing about being there is just seeing the town itself. The center of the city is shaped like an egg, and when you’re there, you feel like you’ve stepped back in time. The city used to be extremely wealthy due to the cloth trade and it’s position right on the coast. The Dukes of Burgundy resided in Bruges, and it was the center of the art world at that time. However, during the 16th century, the channel that they used for transport started to silt up, and the economy declined and there weren’t any new buildings built. The city was basically forgotten until tourists realized what a hidden gem it was, and now it’s a wonderful place to come and see extremely well-preserved medival architecture, pretty little cannals, lovely cafes, and more shopping then I was expecting. It kind of reminded me of a mix of Holland, MI due to the tall skinny Dutch style buildings and pretty flowers, and Mackinac Island because there were tons of horse-drawn carriages in the cobblestone streets and lots of chocolate shops! Often called “the Venice of the North”, Bruge is actually a UNESCO World Heritage Site, due to the fact that the city itself is so well-preserved. The town is very picturesque, and we enjoyed stolling around the different parts of town and just enjoying the nice day.

Belgium is really well known for a few things food-wise: Beer, waffles, fries, and chocolate! So of course, I had to try all of them in the 24 hrs 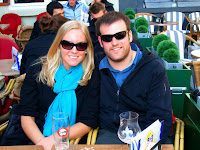 we were there! When we arrived, we headed to the Market Square in the center of town to get some fries from one of the stands right underneath the big bell tower. (Apparently, french fries were invented in Belgium, not France, who knew?) They were delicious! After that, we decided to take a tour of the De Halve Maan Brewery right in the center of town. There are lots of breweries in Belgium, but this was the only one left in the historic center of Bruges, and they’ve been brewing beer since the 1500’s! The tour was really fun, we learned a lot, and we got to climb to the top of the brewery which gave us a nice view of the city. Also, they give everyone a free beer at the end, so it was nice to drink them on the terrace in the sun! Later that afternoon, we got a fresh Belgian waffle topped with chocolate & ice cream, so good! And then of course, we made more than a few stops in the many chocolate shops all over the city; Belgian is world famous for it’s chocolate, and for good reason, it’s delicious! Basically Cam and I were really looking forward to coming here so we could just relax (and eat!) after Paris and London, and we really enjoyed it here! I’d say a day was definitely enough time to see the city, and it’s probably best we’re leaving before I buy anymore chocolate! On to Amsterdam!