Greetings from Amsterdam! I’m currently sitting in the city’s gorgeously modern public library waiting to get 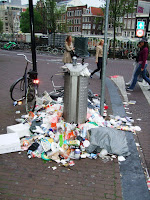 on our night train to Berlin, and to be honest, I am not going to be the least bit sad to leave. I personally didn’t care for Amsterdam at all, it was much different then I was expecting it to be. When we got in to the city from clean, picturesque Bruges on Saturday afternoon, I was struck by just how dirty it was. And I don’t mean just a little bit dirty, I mean there was literally garbage EVERYWHERE. At first I thought it was just at the train station, but then I realized the whole city was filled with trash, and every garbage can was completely overflowing, with piles of trash around them. Apparently, the trash collectors have been on strike for about the past 3 weeks, and it’s just completely awful here right now. There is garbage on the streets, in the canals, and basically everywhere. Luckily it’s not very hot here, or else it would have smelled a lot worse then it already does. To be fair to Amsterdam, I think the trash was a major reason I didn’t like the city, and maybe I would have had a different perception of it had I not had to walk through piles of garbage. But that aside, I still didn’t really like it. I found the city to be confusing, and even though it’s not that big in comparison to some place like Paris or London, I was just completely overwhelmed. Most of that had to do with the fact that there are bicycles everywhere. I felt like half of the city was on bike, and it really made me uncomfortable, just because you can’t hear them coming. I almost got run over about 10 different times, and that was just leaving the train station…not a good start…

One good thing about Amsterdam was were we stayed. Cam booked us a room on this houseboat hotel that was docked in a quiet harbor near the train station, and it’s also righ 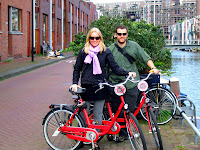 t near this beautiful public library, complete with free internet! Hallelujah! The woman who runs the hotel boat is very nice, and she had an awesome breakfast for the the 2 mornings we were here! Even though our room was tiny, it was really neat to stay right on the water! Right after checking in to our hotel, Cam and I decided to go rent bikes, since that seems to be the popular way to get around. As tramautizing as it was just walking around the city amidst all the bikes, for me it was 10 times worse actually riding my bike through the city. I love big cities, and am not usually easily overwhelmed, but biking around Amsterdam honestly scared the bejesus out of me. Intersections were extremely confusing because you’d have bikes, pedestrians, people on Vespas and motorcycles, cars, and then the tram that runs through the city. On Sunday, I was trying to follow Cam through a busy intersection and accidentally rode out in front of a car that was trying to turn, they almost hit me, they honked at me, and….I started crying. I wish I were joking. I literally pulled my bike over to the sidewalk, threw it down, and started sobbing. (Gotta love throwing a tantrum when you’re 23…) I just really do not like it here…

Not to be completely negative, we did see some good things during our time here. Saturday night we went to the Anne Frank House, and that was very moving. It was really interesting to read the excerpts of her diary they had printed on the walls of the actually rooms that her and her family hid in for years while the Nazis occupied Holland. Going through the house, it really hits home for you what people in Europe had to go through during the Holocaust, and it seems just so unfathomable that something so awful could have taken place. Anne Frank’s father did a tremendous amount of work getting her diary published, opening this house to the public, and starting the Anne Frank Foundation, in an effort to educate people against discrimination.

On Sunday, we went to the Heineken Experience; Heineken beer comes from Holland and right dowtown they have a really cool museum set up in one of their old breweries. You find out all about the 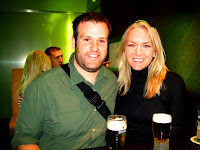 history of the Heineken family, how they make beer, you get to see their horse, and see how the brand has evolved over the years. It sounds kind of cheesy but it was actually really really cool, and you got 2 free beers, so it was well worth it. After the Heineken Experience, we got lunch at the amazing restaurant called Bazaar (another recommendation from Rick Steves!) The restaurant was a colorful, eclectic mix of cultures, and we had a smorgasboard of Middle Eastern food for lunch. Sunday afternoon, we walked through the Red Light district, as we had heard that it was a must-do while in Amsterdam. I don’t know what I was expecting, but it was basically just super shady and very dirty, with all the trash piling up everywhere just adding to the overall grossness. Prostitution is legal here, so all through the Red Light district there are scantily clad girls, well I guess I should say women since a lot of these women appeared to be in their late 30’s, trying to entice people to come in. I don’t know if because it was Sunday afternoon they had the B-squad on display or something, but these women were definitely not attractive. It was just really sad walking through that part of town (which was pretty busy) and seeing the depravity that fills some people’s lives, it was just all very seedy and disgusting.

Honestly, Cam and I have been spending quite a bit of our downtime here in Amsterdam at the public library just to get out of the craziness of the city. It’s a huge, gorgeous, modern space, inside and out, and it has 2 amazing restaurants right in the library! Last night we got dinner at the Italian cafe and it was delicious! Luckily we’ve had a bit of sunshine during our 2 1/2 days here, so this morning, we biked out of the center of the city to see a more residential part of town that Cam had heard about on a “green” building show that he watched. (Oh don’t mind the fact that I broke down crying again this morning because I got so overwhelmed riding my bike in all the traffic…) Anyway, once we got to this neighborhood, it was much calmer and quieter, and it seemed like a nice part of town, plus I finally saw my first windmill! Cam was telling me that all the buildings we saw, primarily residential homes, have been recently developed using green building techniques. All the 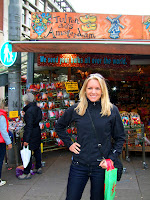 architecture was really modern, and it had a way different feel then the center of the city. We had lunch in a cute little cafe, sat by the water, watched the boats, and enjoyed the sunshine!

We’re about to catch an overnight train to Berlin, and I’m definitely ready to leave; Amsterdam was just not for me. I knew that smoking pot was a big part of the culture here, but I was hoping for more wooden shoes and tulips, and less drugs and sex, however, it seems that weed is really the main focal point of the city from what I could see. It’s sad because I could tell that there were many of old buildings throughout that I’m sure were significant at one time, but now they’re covered up with tacky souvenir shops and “coffee” shops selling pot. We didn’t smoke while we were here, so I kind of feel like unless you’re going to do that, there really isn’t too much else to come to Amsterdam for. I don’t mean for this post to be all negative though, all the people here were extremely nice, and everyone is blonde, tan, tall, and healthy looking. (I’m Dutch and so I wanted to come here for my heritage, and Cam said that I actually look like I’m on the short side here!) If we come back to Holland, I definitely think that I’ll want to venture out to the coast or to the countryside, to hopefully get a little more of the picturesque ideal I enivsioned. Alright, that’s all for now, but I’ll definitely keep you posted on what we’re up to once we get to Germany! Tot ziens! (goodbye in Dutch!)