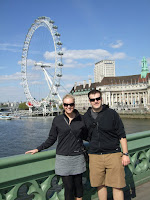 Cheerio from London everyone!! Well, we’re actually in Paris right now, but since I didn’t have time to write before we left London, I wanted to post about it while it was still fresh in my mind…

We arrived last Thursday morning (5/6) at Heathrow, well rested from our red eye (not really since we basically watched movies for the entire flight), and hit the ground running. After dropping our backpacks off at our hostel, Cam and I walked all around the city because the weather was beautiful and sunny!!! We were staying at Clink Youth Hostel, which was on the north side of the city, near the King’s Cross/St. Pancras Train Station where I’m told the Harry Potter train stop is? (I’m not really an HP fan so we didn’t look for it) We walked through the ‘City,’ or Wall St-like area to the Thames River the crossed over to the South Bank and walked along the river by the London Eye, then walked back to the other side of the river and took pictures by Westminster Abbey, Parliment, Big Ben, and in Trafalagar Square. We had fish and chips at an English Pub for dinner, got dessert at a cute little cafe, then walked through bustling, brightly light Picadilly Square back to our hostel, a great start to our trip.

The next morning (Friday), we had a tea and toast breakfast at our hostel, then headed to St. Paul’s cathedral. St. Paul’s is the 4th largest church in all of Europe, and it was very interesting to see all the royal history that is very much a part of the church. We climbed the 562 steps to the Golden Gallery at the top of the dome and got a nice view of London, it’s a really beautiful city!! In the afternoon, we went to the Tower of London, and learned a TON about British history. Cam and I are both history/museum buffs, so we’re trying to see as many historical sites as we can in the cities we’re visiting. The Tower of London has been a part of British history since the beginning and has served many different purposes, most famously a prison/private execution site where 3 queens of England were beheaded. I’m a really fascinated by the historical drama of King Henry VIII and his wives, and so it was really interesting to see the actually place where his wives were beheaded, in a weird sort of way…At the Tower of London, we also got to see the Crown Jewels, many suits of armor that has belonged to hundreds of years of kings of England, as well as the torture devices they used on prisoners at the Tower. My favorite part of the Tower was getting a tour from a Yeoman Warder, or Beefeater; these are the guys who are the ceremonia 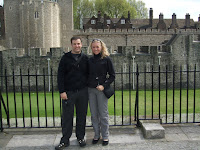 l guards of the Tower, and our tour guide, Barney, had lots of great stories. One thing that I really enjoyed about Thursday and Friday is that Cam and I had lunch at 2 different chain restaurants (London seemed really big on local chains because we’d see a restaurant or coffee shop, then see the same one a few blocks later) We had lunch on Thursday/Friday at places caller Pret a Manger and EAT. and both were great. I mean they weren’t anything super special, they were a lot like Panera, just good for a quick lunch, but they both used all fresh, organic/local ingredients for their sandwiches and salads, and the food just seemed much healthier/better then Panera, so I’m hoping one of them will decide to move across the pond…After the Tower, we walked over the Tower Bridge (what most people think of when they think of London Bridge), and had traditional English meat pies for dinner at another English pub called the Barrow Boy and Banker on the south side of the Thames. After dinner, we walked along the Thames down to the Tate Modern Art Museum. The museum is in an old power plant, so the it has a very industrial look and feel and it features art dating from 1900 onwards. I’m a big fan of cubism, abstract impressionism, as well as Pop Art a la Andy Warhol and Roy Lichtenstein, so I really enjoyed the museum.

On Saturday morning, we went to Westminster Abbey, which is a beautiful church where basically all of British royalty is buried. We had downloaded a Rick Steve’s audioguide on our Ipod, so we used that to navigate around the Abbey, which was very helpful. (Also, I’ll probably be doing another ode to Rick Steve’s post when we get back, Cam and I are pretty much obsessed with him, and his books/tv shows/audio guides/recommendations have been instrumental in planning this trip!) At the Abbey 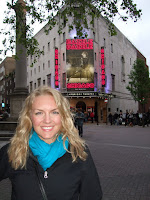 , we were able to see all of the church’s beautiful interior, as well as the tombs of all the British monarchs (including King Henry VIII, Queens Mary & Elizabeth) as well as famous Brits like Jane Austen and Sir Issac Newton. One of my favorite parts about Westminster Abbey was seeing the Coronation Chair, the chair that every British sovereign has been crowned in since 1300, awesome (or at least Cam and I thought it was since we are huge nerds who love stuff like that!) After touring the Abbey, we saw the beginning of a parade near Parliment Square to honor the 65th anniversary of VE day, then walked to Leichester Square, which is in London’s version of Broadway, the West End. I really wanted to see a musical while we were in London, so Cam and I were able to get 7th row tickets to “Chicago” for that night! We then headed to the British Museum, a huge museum that houses England’s enormous collection of artifacts. We saw the Rosetta Stone, the Elgin Marbles from the Parthenon (apparently a British Earl took them during the Ottoman Empire, and there is a lot of controversy surrounding this…), as well as many other artifacts from ancient Egypt, Assyria, and Greece. We had dinner at a Wagamama Noodle Bar, which was very hip and modern food. London is very much like New York in that there are people (& restaurants!) from all over the world, so Cam and I were glad to be able to get some good ethnic food. Then it was time for the show, so we headed to the Cambridge Theater in the Covent Garden area (an adorable part of town with tons of stores/theaters) to see Chicago! The show was fantastic, I don’t know if I’d say it was quite Broadway quality, since the sets/costumes weren’t super elaborate, but we really enjoyed it!

On our last day in London, we went out for a traditional English Breakfast (tea, eggs, sausage, beans, tomatos, potatos, and toast) and then went to the British Library. The British Library houses an insane amount of books, but what we came to see was their Treasures Room, 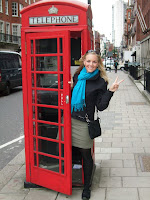 which contains notable documents from British history. We were able to see the Magna Carta, an original Gutenberg Bible, some of Da Vinci and Shakespeare’s original notebooks, original writings from Jane Austen and Lewis Carrol, as well the actual notes and napkins that the Beatles scribbled their lyrics on. After the library, we hopped on the Tube, the British Subway, and went to go see Harrod’s department store. It was definitely worth all the hype I had heard about, it was such an amazing store! It’s HUGE, and Cam and I had fun exploring all the different departments, especially the food rooms! We did some more shopping near Harrod’s in the Kensington Area, then walked all through Hyde Park to Notting Hill. Our final dinner in London was some yummy Thai food at Busaba Eatthai, followed by a visit to the Hagaan Daaz cafe 🙂

All in all, I loved London! It’s a huge city, but to me it had a much more cozy feel then NYC since the buildings, for the most part, aren’t nearly as tall. We were really surprised how little English we heard spoken, it’s truly a global city with tons of people from all over the world! Everyone on the street has great, edgy style and it was great for people watching. It’s definitely an expensive city (as evidenced by all the $100,000+ cars we saw parked on every street), but I’m so glad we got to experience it. The only downside was that it definitely lived up to it’s rainy reputation, it was rather cold and gloomy for the majority of our visit…oh well, we still loved it! Cheers!