During a little shopping trip yesterday, I made an impulse buy at Victoria Secret. I originally went in the store because I had one of those coupons that they send you in the mail for a free panty. (Such a trick to get you in the store that I always fall for!) The coupon was also good for $10 off a bra, and since I had a gift card, I figured that I’d look around. Enter the VS Miraculous Push-up Bra. I had actually seen this bra the past few times I’ve visited VS, and 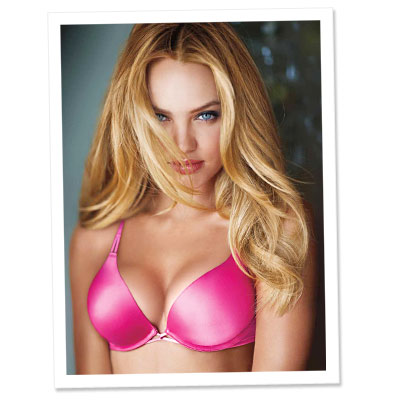 always thought it was really ridiculous. To say this is a padded bra is an understatement. It claims to add 2 cup sizes, and it has the padding to prove it. It’s literally like 2 pillows with straps. When I had seen it in the past, I remember wondering who in their right mind would actually buy this bra. But for some reason yesterday, I decided to give this bra a try. (and no, that’s not me in the photo (I wish haha) but it is the bra!) Despite my skepticism, once I had it on, I was sold. This thing is really really padded and honestly makes you look like you have Dolly Parton cleavage, it’s absurdly awesome. I couldn’t resist getting it. (Cam has nicknamed it ‘The Explants’ because that’s basically what this bra is!) And while it’s not something I’ll wear everyday, it’s nice to have it in the closet for the right outfit or occasion, especially down here in the South where I swear everyone’s cups runeth over…now I’m perfectly happy with the bod that I have, but from time to time, it’s kind of fun to non-surgically change it up and try a new look! So if you’re looking for a ‘lift’, check out this bra, you won’t be disappointed! (I bought it in bright turquoise aka the color that I’m obsessed with, but it also comes in houndstooth (my other obsession) so I’m actually considering getting another one!)