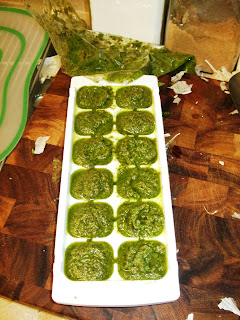 Since coming back from Europe, Cam and I have been on a huge pesto kick. We had some amazing pesto when we were in Cinque Terre, Italy. Cinque Terre is on Italy’s Ligurian coast, the birthplace of pesto; specifically, pesto originated in Genoa, the Italian city just north of Cinque Terre, and traditional pesto from the region is known as Genovese pesto. The pesto we had there was so creamy and delicious, definitely some of the best meals I’ve ever eaten. Since pesto is my favorite, I tried it out at quite a few of the restaurants we went to in Italy, but this really traditional place in Riomaggiore where we ate dinner on our anniversary had the best of the bunch by far. Our waitress was really nice, and so at the end of our dinner, I tried my best to grill her on exactly how they made their pesto. (I wish I could say we had this convo in Italian, but alas, my Italian skills are terrible despite 5 semesters of Italian at U of M…I’m determined to brush up on them more before the next time I go back to Italia!) She said that they used fresh basil, garlic, pine nuts, parmigiano reggiano, and pecorino romano cheese in their pesto. She also stressed the importance of not adding any salt. I made a mental note and swore that I’d make it when we returned to the states. We ended up buying a few jars of prepared pesto before leaving Cinque Terre and enjoyed those this summer when we got home. (I also had some excellent fresh pasta with pesto when I was in Portland this summer at Piazza Italia in the Pearl District, extremely authentic!) I did try making pesto as part of another dish last month, but I used walnuts instead of pine nuts. That’s a money saving substitution as pine nuts are generally pretty expensive, but I wasn’t too worried about making amazing pesto as it was just one of the components of the dish.

Anyway, over Labor Day weekend, I got a bunch of fresh basil from the Farmers’ Market in downtown Greenville, and I was determined to make a big batch of traditional Genovese pesto. After scouring the internet for recipes, I found that what our waitress said was true, most traditional Genovese pestos consist of basil, garlic, pine nuts, parmigiano reggiano, and pecorino romano cheese. (Although not all the recipes I found called for pecorino, some just used parm, but I wanted to follow the instructions of our waitress exactly…some of the recipes I found also said to use salt, so I opted not to include that per her direction). The recipe I used was basically a mixture of a bunch of the recipes I found online, I wanted to make a huge batch, so I just increased the quantities of most of the recipes I found:

Supposedly, truly traditional pesto is made using a marble mortar and pestle, however, I took the easy way out and used my food processor since I was making such a large batch. (Since we do actually have a marble mortar and pestle, I do want to try making it that way at some point). I read online that heat from the food processor can damage the flavors in the pesto, so I stored my blade in the freezer before preparing it. Basically I just put everything in the food processor and blended it until it was creamy.

Cam and I had some of the pesto over pasta that night, and it was excellent! Not quite the same as eating it on a terrace overlooking the Mediterranean, but pretty darn close. Over Labor Day weekend, in addition to buying basil, I actually bought some prepared pesto from one of the local farms and we had that a few days ago and it was very tasty as well. (I told you we are on a pesto kick!) Since I made such a large batch of my pesto, I wanted to freeze it to have later on, and upon doing a little research, I stumbled across a very handy way to freeze pesto-in an ice cube tray! Instructables (a favorite website of Cam’s actually) had a post about freezing pesto in an ice cube tray (and ironically the post included a pesto recipe from the Produce Station in Ann Arbor, small world). I put all my remaining pesto in to a Ziploc bag, and then cut a corner and piped it into the ice cube tray (there’s a pic of my finished creation at the beginning of this post). I covered the trays with plastic wrap and I was surprised how quickly they froze up. Now when we want to have pesto, I can just pop out 2 cubes and have a quick and easy meal anytime. But my guess is it won’t last long, as our obsession with pesto doesn’t seem to be ending anytime soon…