So I really don’t know why I feel the need to use alliteration in all my post titles, but somehow it just happens…Anyway, goat cheese. I am obsessed. I’ve always liked it, but I ate a ton of it when we went to Europe, and it’s just so gosh darn delicious. I know that I wrote about this in my previous post, but probably the best goat cheese dishes I had were when we were in Paris. I had an amazing goat cheese quiche at a cafe near the Louvre, but the best goat cheese dish I had overall was the SALADE DU BÉARNAIS I had at at Le Relais Gascon. The salad had fresh greens, fried potatoes, bacon lardons, and the most amazing goat cheese. A few weekends ago, Cam and I tried to recreate it at home using what we could find at Whole Foods. The trickiest element was trying to make the bearnaise dressing taste like theirs, but we came pretty darn close, and the salad was delish. (It probably would have been better had I not filled up on the baguette, Camembert, and wine that we bought to snack on while we were making the salad….whoops). Here are some pics I took of our finished product: 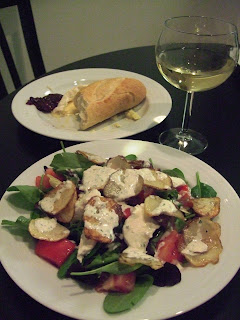 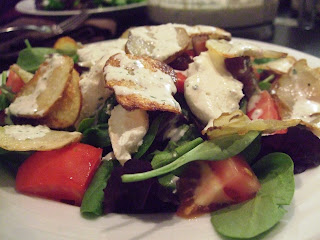 More recently, I made a recipe I’ve been dying to try for awhile-White Pizza with Arugula a la Ina Garten. It’s the pizza in the picture on the back of her Back to Basics cookbook, and thanks to my Barefoot Contessa obsession, I just had to try it. (The pizza itself is really similar to the Truffle Pizza they serve at the Jolly Pumpkin on Main Street in Ann Arbor, a dish that’s a personal favorite of mine and another reason I wanted to try making Ina’s version of it!) The recipe in Back to Basics calls for you to make 6 individual pizzas, but I opted just to make one big one. I also took a little bit of a Sandra Lee approach and used some frozen whole wheat pizza dough I picked up at the farmer’s market instead of using Ina’s recipe for the dough. (The pizza dough is from the same company that I’ve been getting fresh pasta from since we’ve moved down here, Rio Bertolini’s, all their stuff is AMAZING) The key to this pizza is the beautiful combination of flavors. You start by taking your dough and brushing it with garlic oil. This is what makes the pizza; you take some good olive oil and simmer it for 10 mins with lots of chopped garlic. This infuses the oil with intense garlic flavor and makes the pizza taste amazing. You then cover the pizza dough with cheese….and lots of it. Shredded mozzarella, shredded fontina (an Italian cow’s milk cheese with an intense flavor), and of course GOAT CHEESE (so good). The pizza is then sprinkled with more of the garlic oil (heaven), and then baked. When it comes out of the oven, you top it with arugula tossed in a mixture of olive oil and lemon juice. The blend of the garlic, the intense flavor of the cheeses, and the slight kick of citrus makes this pizza a must-try recipe, and a great use for goat cheese. Here’s some pics of how mine came out: 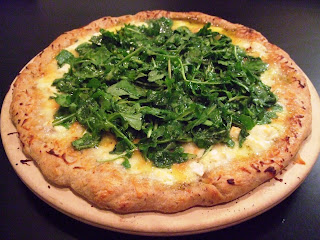 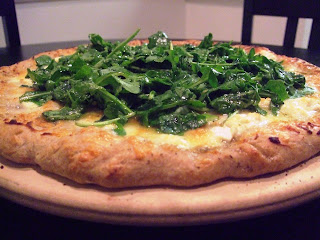 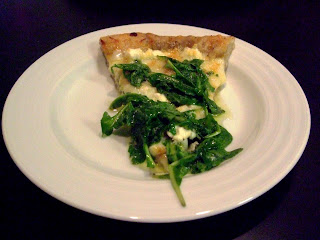 So one day in the far away future, Cam and I will live on a mountainside and have a pair of goats, where I’ll be able to get fresh milk and make cheese whenever I want. (Seriously though, I really would like to get some goats, I’ve already got names for them–Hansel & Gretel…or Maizey & Blue…I haven’t quite decided yet…) But until that day comes, I’m going to have to settle for mixing store-bought goat cheese in to my weekly menus now and then!