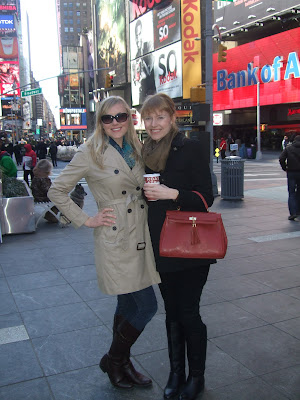 This past weekend, I was fortunate to be able to take a trip to New York with my sister, and we had a fabulous time! Our trip started off early Friday morning, as I drove to Charlotte, which is 90 mins from my apartment, to catch my 6:15 am flight. Cut to me driving down I-85 at 3:15 am in the pitch dark with a million semi trucks as I sing at the top of my lungs to Katy Perry “Firework” to keep myself awake since I had gotten about 45 minutes of sleep the night before. Awesome. But I made it to the airport, caught my flight, and made it La Guardia with no problems. I met my sister at the airport, as she was flying in from Detroit. I was so excited because she had never been to NYC before, and she’s considering moving there after she graduates. We hopped in a cab and dropped our stuff off at the Sheraton in Midtown, then headed to meet my friend Lisa, who was also in town for the weekend. We grabbed some breakfast, walked around Times Square, and did some shopping on 5th Avenue. We met my friend Dani and one of my other sorority sisters for lunch, and it was so great to spend some time with my friends and remininsce about old college memories. 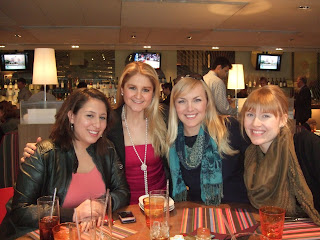 We spent the rest of the afternoon shopping in Soho, and Melissa and I even saw Christy Turlington buying her son a pair of Crocs! (so random) Friday night, we went out to dinner with my friend Kristen at this great Italian restaurant on the Lower East Side, went for drinks, and hung out with her friends. We got up Saturday morning and headed to Brooklyn to meet our friends, Jeff and Laura, for breakfast. (We ate at this delish place called Olea, and I had this fabulous savory parmesan french toast, that had poached eggs and peas…sounds odd, but it was really superb and something I’m dying to replicate at home!) Cam had come into the city for work on Friday night, so he came with Melissa and I to Brooklyn, and it was nice to be able to enjoy a meal with some of our favorite married friends. It was really neat to get to see Brooklyn and explore their cute neighborhood (Ft. Greene) as well. After breakfast, we checked out the Brooklyn Flea, this awesome hipster vintage craft market that’s held in this gorgeous old bank. 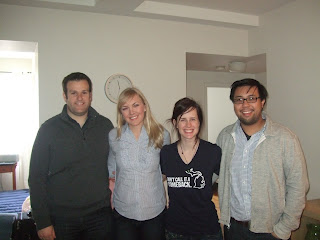 We lucked out with super nice weather on Saturday, so we headed back to Manhattan to do some more sightseeing. Melissa’s thinking about potentially doing grad school at FIT at some point, so we checked that out–what a cool school. Another one of the main things we did over the course of the whole weekend was indulge in some amazing food, which is one of my favorite things about NYC. We got some falafel (yum!) while we were walking around Midtown, and then the made the trek up to the Upper West Side specifically to get these cookies from Levain Bakery, that I had heard were supposed to be fantastic. Let me tell you, these cookies were AMAZING. The Dark Chocolate Chocolate Chip Cookies were just beyond good. (I was kind of mad that they only had regular chocolate chip cookies with walnuts because I am not a fan of nuts in cookies, brownies, or breads…but oh well, the chocolate chocolate chip cookies totally made up for it) Definitely worth the subway ride/walk. We took a stroll through Central Park, and then went back to the hotel to take a nap because New York tires you out! 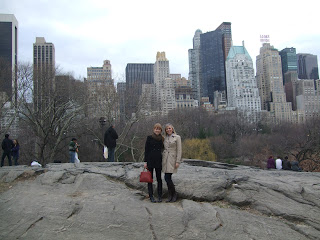 That night, we went out with one of Melissa’s friends who goes to FIT, and it ended up being a really good time. Part of the reason for this trip was finally getting to celebrate the fact that Melissa is now 21 and it was so nice to be able to go out with her and party! We went to a club in Chelsea, and I even though I totally felt like Leslie Mann playing the older sister in ‘Knocked Up’ where she’s all worried about being too old to go to the club, it was a lot of fun.  We got to cut the line, got free drinks all night, and I felt like I was 21 again. We even got late night diner food and stay out til 4 am. Good times. 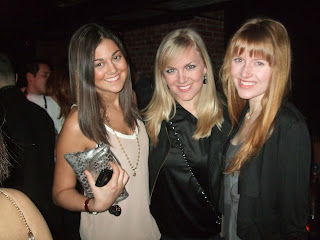 Sunday morning, we got brunch, did some shopping in the rain, and got cupcakes at Magnolia Bakery. I’ve had Crumbs cupcakes in New York a few times before, but I hadn’t tried Magnolia’s. Their vanilla cupcake with vanilla frosting is to die for, but boy is it sweet. (Seriously, this cupcake was almost too sugary for me to eat, and that’s saying something!) Melissa and I caught a cab back to LGA, and went back to our respective cities, but I’m so glad that we were able to spend a weekend together in the Big Apple. Now if I can just get her to move their after graduation, I could visit this great city even more often 🙂 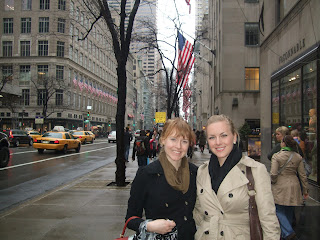