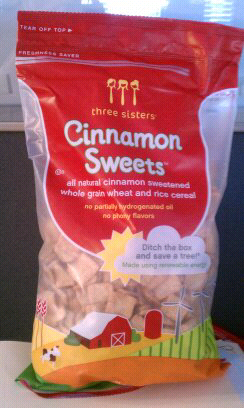 I swear, it takes me forever to get a blog post done. I had the intention of writing this post right after I got done eating my desk-fast at 8:30 morning…and now it’s bed time. Oy vey! Well I will try to make this post short and sweet….so far I’m staying on track with my workout plan for the most part; I made it to Body Pump class last night, but this morning I was just way too tired to drag my butt to the gym. However, my sweet hubby was able to come home to walk Lola Beans at lunch, so I was able to fit in my cardio for today after all. Since it was still in the 90’s here today, I did an interval workout on the treadmill. Tonight is my in-laws last night in SC so we had some good ole Southern BBQ for dinner, and now we’re almost to another weekend, woo! So even though today’s post is delayed, I just wanted to take the change to tell y’all about a product I picked up at Whole Foods earlier this week, and I feel like I’ve been slacking on my “green” posts, so I was especially happy to come across this cereal. Three Sisters Cinnamon Sweets are like a healthier, sustainable version of one of my current childhood favorites, Cinnamon Toast Crunch. I’ll admit, I’m a marketer’s dream and I initially picked up the Cinnamon Sweets because a) they were on the end of the aisle and b) because they had wind turbines on the front and I thought Cam would think that was cute…(it’s reasons like this that we spend an unhealthy amount on food every month…) But after reading the package, there are a lot of things about Three Sisters cereal that I thought were really great. Although it’s not an organic cereal, it doesn’t contain any dyes or high fructose corn syrup, and it’s produced using 100% wind power. Also, the cereal just comes in a bag so there is no cardboard box waste, because as I found out on their website, “Each year, there are about 2.5 billion cereal boxes sold in the United States. If even half of those boxes were bags, we’d save 90,000 tons of paperboard. The energy saved could power over 11,000 homes for a year. It would eliminate 170 million gallons of waste water and avoid 1,800 garbage trucks of solid waste.” And they really taste delicious!! Check out this more in depth review from Growing a Green Family for more information…I’m looking forward to trying their Marshmallow Oaties next 🙂