Quinoa…what a weird name for such an awesome little food! Even though I know it’s pronounced KEEN-wah, I always want to call it Kin-oh-ah…but however you say it, it’s a something that I’ve been cooking with more and more in the past couple of years, and I just realized I’ve never blogged about so I figured it was high time! While most people assume that quinoa is a grain, it’s actually a seed that is more closely related to spinach and other leafy green veggies. What this means is that it’s jam-packed with nutrients, but it acts like a grain in terms of incorporating it recipes. It comes in a variety of colors, however, I’d say that yellow is the most commonly used type. Quinoa is very high in protein, but what’s so great about it is that it’s a complete protein, meaning it’s a great choice if you have a vegetarian/vegan lifestyle. It’s also high in fiber and has lots of other good-for-you things such as minerals which can improve your overall health. Plus, the ancient Incas ate it, so you know it’s good. For more information on quinoa’s nutritional benefits, check out this website.

What I like about quinoa is that when it’s cooked it’s fluffy and delicate (almost like couscous) but it’s got a subtle nutty flavor to it. You can find it in most grocery stores, and it’s generally an item that would be sold in the bulk section of Whole Foods or similar stores, and that’s typically how I buy mine as it’s usually cheaper, plus you don’t waste all the packaging. It’s an extremely versatile ingredient that can easily be incorporated in dishes year round. Recently, I made two different meals, one more summery and the other cold-weather comfort food, but they both call for this mighty little “grain”.  Here are the recipes, and hopefully they’ll encourage you to give quinoa a try if it’s something you’ve never cooked with before! (And if you’re a quinoa lover like me, hopefully you’ll enjoy them too!) 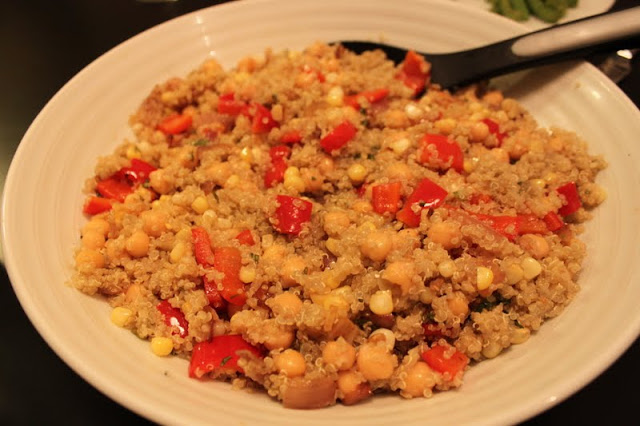 Chickpea Quinoa Salad is a perfect summer side dish and it’s delicious both hot and cold. I will typically make a big batch of a salad like this, and then I’ll eat the leftovers for lunch and I love that it’s a lot more filling and nutritious than a normal summer side like pasta salad. I’ve included the original recipe, but this really one of those salads where you could pretty much throw in whatever you’ve got in your fridge…next time I think I’m going to try adding some crumbled feta cheese! (Also, I didn’t get step by step photos of this recipe, but it’s fairly simple, so I just captured the finished product!)

(When I made the salad, I ran out of time and didn’t roast the red pepper, I just chopped it up cooked it in the skillet with the corn, but I’m sure it would be delicious if you followed this step!) Begin by roasting the red bell pepper: Preheat the broiler and set
the rack in the center of the oven. Rub 1/2 teaspoon olive oil on the
red pepper and place it on a foil-lined broiler pan. Broil until the
pepper is charred on all sides, about 5 minutes per side. Once charred,
place the pepper in a metal bowl and cover the bowl tightly with plastic
wrap. Cool to room temperature then peel off the charred skin and
discard. Remove the seeds and discard. Cut the pepper into small pieces
and set aside.

To cook the quinoa, begin by rinsing it very well in a fine mesh
sieve under cold running water. Drain then combine with 2 cups water and
a pinch of salt in a medium pot. Bring the water to a boil then
decrease the heat to low and cover. Simmer covered for 15 minutes or
until all the liquid has been absorbed. Cool to room temperature. (Another one of my favorite types for cooking quinoa is to cook it in chicken broth instead of water, it makes it more flavorful!)

Heat the remaining 1 1/2 teaspoons olive oil in a saute pan set over
medium heat. Add the onions and cook until soft and translucent, about 8
minutes. Stir in the minced garlic and cook for 1 minute, then add the
corn. Cook, stirring often, until the corn is cooked through, about 6
minutes. Remove the pan from the burner and cool to room temperature.

To assemble the salad, combine the quinoa, roasted red pepper, corn
mixture, chickpeas, salt, pepper, lemon juice and half the sliced
scallions in a large bowl. Mix well and adjust seasonings to taste.
Transfer the quinoa to a serving dish and garnish with remaining
scallions. Serve at room temperature or warm if desired. (It’s also yummy cold!) 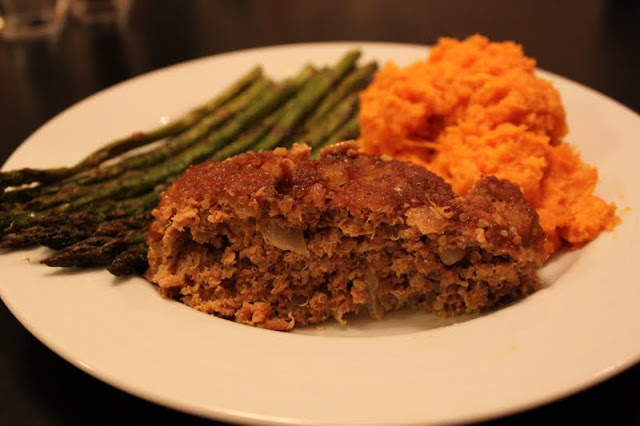 Turkey and Quinoa Meatloaf is an awesome healthified take on an American classic. This week there’s been a chill in the air here in Colorado, and it seems as if fall just suddenly showed up. Yesterday was really rainy, so I was craving some comfort food and when I came across this recipe, I thought it would be perfect. Cam was very skeptical at first when he saw me putting quinoa in the meatloaf (he thought it was going to be a side dish), but he ended up loving the finished product. It works really well in place of bread crumbs as far as the texture goes, and it’s definitely a recipe I’ll be making again. 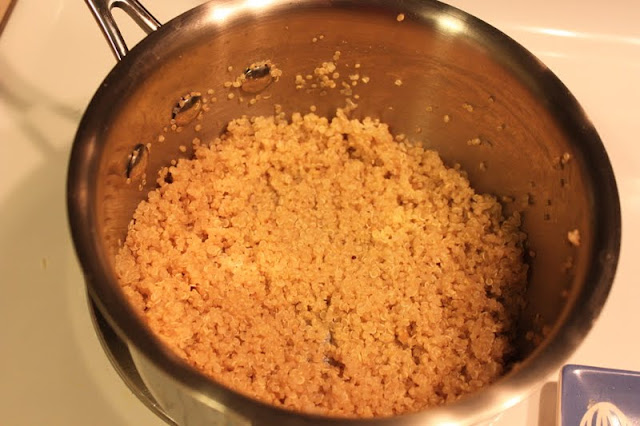 Bring the quinoa and water to a boil in a saucepan
over high heat. Reduce heat to medium-low, cover, and simmer until the
quinoa is tender, and the water has been absorbed, about 15 to 20
minutes. Set aside to cool. 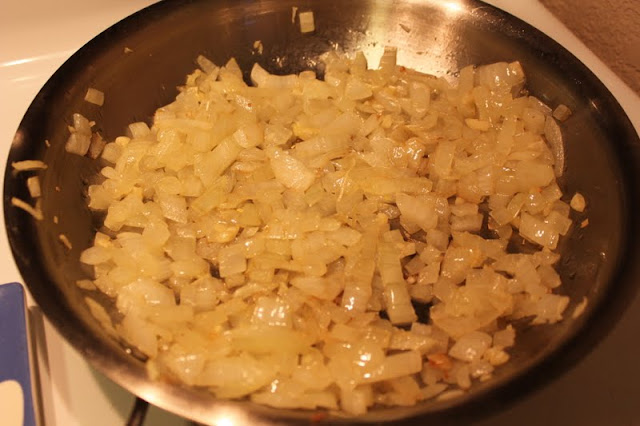 Heat the olive oil in a skillet over medium heat.
Stir in the onion; cook and stir until the onion has softened and turned
translucent, about 5 minutes. Add the garlic and cook for another
minute; remove from heat to cool. 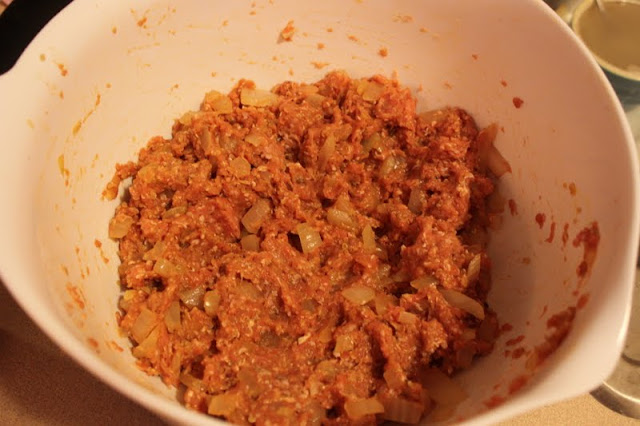 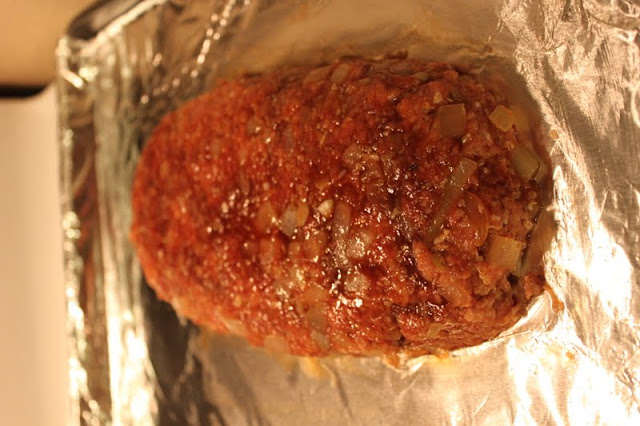 Shape
into a loaf on a foil lined baking sheet. Combine the brown sugar, 2
teaspoons Worcestershire, and 1 teaspoon water in a small bowl. Rub the
paste over the top of the meatloaf.

Bake in the preheated oven until no longer pink in
the center, about 50 minutes. An instant-read thermometer inserted into
the center should read at least 160 degrees F (70 degrees C). Let the
meatloaf cool for 10 minutes before slicing and serving.

Ps: Did any other SNL/NPR fans see this exciting news yesterday? Ben and Jerry’s is actually going to make Schweddy Balls Ice Cream…hilarious. I’m definitely going to be keeping my eye out for it because I think the flavor sounds delicious, plus it’s just too funny not to try. This skit always makes me laugh 🙂