It’s Wednesday. Part of me feels like “I can’t believe it’s already Wednesday” and the the other part (the part that would rather be under my covers right now) feels like “I can’t believe it’s ONLY Wednesday!” I think I’m just feeling a little out of it because we got back from Oregon Monday morning and hit the ground running; I headed straight to work, then went from work to teaching English, then from teaching to workout. Then yesterday I worked all day, went to a new fitness class (more on that later), and then went to Denver for the Jimmy Buffett concert (more on that later too). Today basically is a repeat of Monday, and then tomorrow I’m volunteering at the Humane Society in the morning, and then working all day. So rather than continue to bore you with writing out the contents of my calendar, what I’m trying to say is I’m busy. Blah. As much as I would love to be home in my sweats by my fireplace blogging and pinning away (just that mental picture is glorious), it’s not in the cards for the next few days. And that sucks because I have so many things on my list to blog about; recipes I’ve made recently, workouts, photos of travels and visitors, etc. I’m going to try to post as much as I can, but bear with me if things are a little sporadic this week! I think that next week should be a little less hectic and I’m looking forward to some downtime to catch up on  blogging because I am really excited to have some time to write all the posts I have swirling around in my head and share them with all of you! Next week I’m also hoping to start thinking about my menu for Thanksgiving, because we are hosting our first turkey day this year and I’m really excited about that…oh, and to start brainstorming about Christmas ideas as there are a lot of things I want to bake and craft…so much to do, so little time!
Anyway, on to our trip to Oregon. This summer, a few of Cam’s friends from work mentioned that they were interested in visiting Portland and so since my husband thinks that his home state is the greatest thing since slice bread, he eagerly agreed to the trip and told everyone that they could stay at his parents’ house. So while we are also excited to have a chance to visit with family and spend time with our nieces, much of the weekend consisted of playing tour guide. Yes, the majority of the weekend was me and four engineers. Pretty much sounds like the definition of a good time. (Insert sarcasm here).
One of the main things that these guys wanted to experience about Oregon was it’s incredible craft beer culture. There are brewpubs all over Portland and across the state that produce some really fantastic beer of all styles, and we hit up quite as few of them over the weekend. I really like going to breweries in Oregon because 1) the quality and variety of the beer is excellent and 2) Oregon law requires that all brewpubs have to serve food as well as beer. In addition to having a great beer culture, Oregon has a really great foodie scene as well so the food at these breweries goes far beyond typical bar food and features a lot of unique dishes using fresh, local ingredients.
Now I know that some girls aren’t really beer drinkers, but I for one am definitely a beer person. Don’t get me wrong, I enjoy a glass of wine, but I find beer to be much more interesting because the brewers can really be creative and create many different types of flavors, whereas with wine you’re pretty much dependent on the grapes. I think people who say that they don’t like beer haven’t tried the wide variety of microbrews that are out there. As far as styles go, I used to primarily order porters and stouts. These are typically dark, heavy beers that often have a lot of chocolate or coffee flavors to them. After going to Europe last summer, I did a 180 and started ordering lighter beers such as pilsners most of the time. Lately, I’ve been on a big amber kick and am really loving more medium-bodied beers that have learn more towards malty instead of hoppy.
So before I get to pictures of the family or the other fun things we did this weekend in Oregon, here is an overview of the breweries we visited, along with my thoughts on each. And yes, I realize this post is already getting really long, so if you continue reading you will be rewarded with a hilarious joke I heard this weekend, so you know you’re hooked now…(Ps: Some of the pictures are from the Retro Camera app on my phone, and then others are from my actual camera…I like to mix it up) 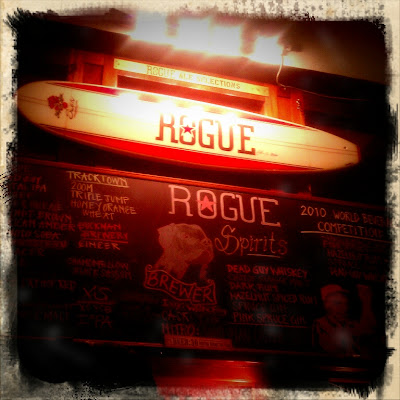 1. Rogue: This was the first place we went to when we got off the plane late Thursday night because (There’s actually a mini Rogue brewpub inside the Portland airport which some of Cam’s friends whose flight arrived earlier than ours did visited before our plane landed!) Rogue is one of the more established Oregon microbreweries and it’s based out of Newport on the Oregon coast. (Cam and I visited their headquarters two years ago when we were at the beach) They’re probably the Oregon brewery that’s most well-known east of the Mississippi . They’re really focused on creativity in their branding and in the beers they try, and have some really off-the-wall beers. However, crazy does not necessarily equal good in my opinion. Some of their beers are pretty decent, but a lot of them are just not anything special, and some are just bad. 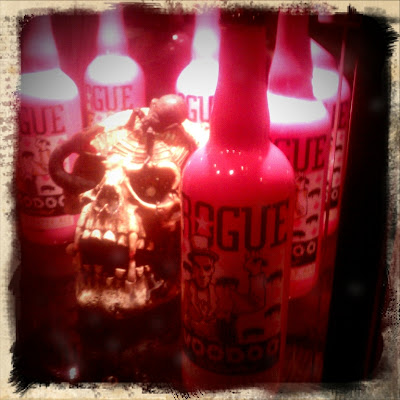 One example of their craziness: their Voodoo Doughnut Maple Bacon Ale. Voodoo is a Portland landmark and their famous for their bacon topped doughnut; Rogue tried to turn it in to a beer. One of Cam’s friends bought a bottle of it and it was really really gross. So while their beer not always be the best, they do get points for being imaginative I suppose. I started the night with their American Amber Ale, and then I tried some type of scotch ale, but I don’t remember the name and the beer didn’t stand out either. However, it was a good place to start the night and a good intro into the diversity of beer styles in Oregon. 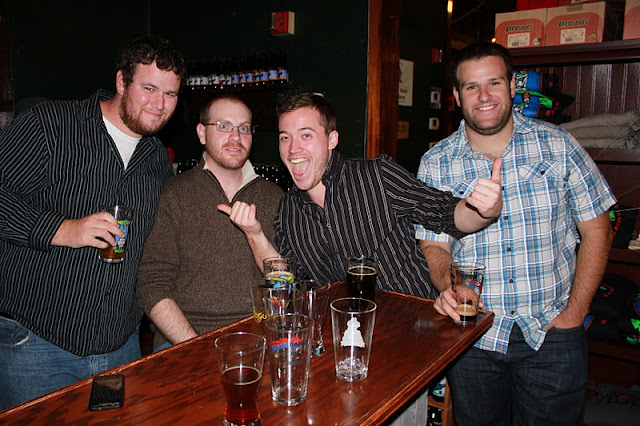 Engineers…so awkward…I’m just kidding, these guys were actually a lot of fun and I was laughing all weekend long…but this photo is pretty awkward. 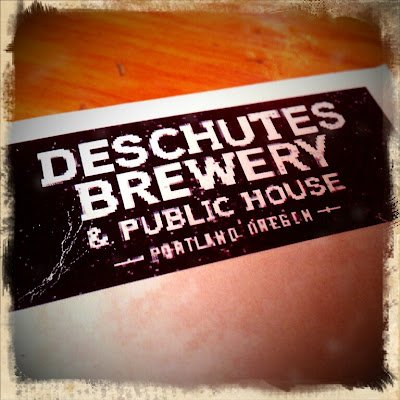 2. Deschutes Brewery: On Friday afternoon, we headed back to Portland to have lunch at the Deschutes Brewery Public House in the Pearl District. Based out of Bend in central Oregon, Deschutes is one of my favorite Oregon breweries. I hadn’t been to the location in Portland yet, and I really liked the vibe which was kind of like a modern pub which Northwest influences. 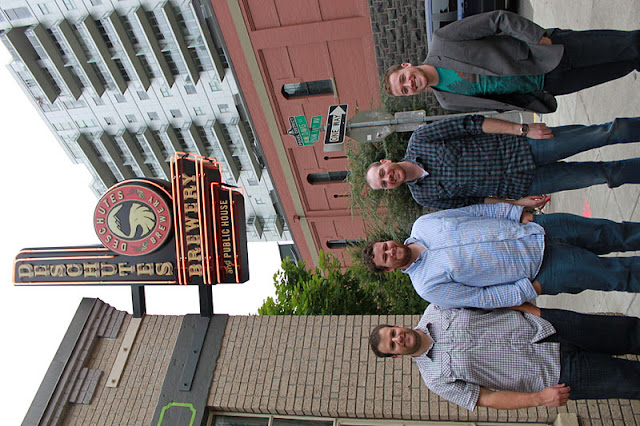 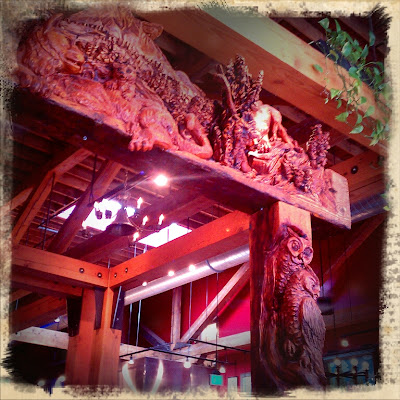 I tried a beer called Rye-ders on the Storm which was a pub exclusive, meaning it was something brewed there in Portland and only available there for a limited time. That’s one of the great parts about actually being in Oregon and going to the breweries, you get to try a lot of unique things that aren’t available anywhere else. This was a nice malty beer with some caramel notes, and it was really delicious. 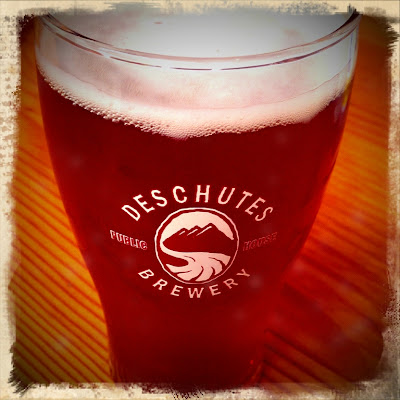 For lunch I ordered one of the spent-grain flatbreads, and the dough uses the leftover grains from the beer-making process. Mine had garlic cream sauce, sun-dried tomatoes, fresh whole milk mozzarella, fresh local spinach, black pepper garlic sausage, and garlic parmesan aioli. 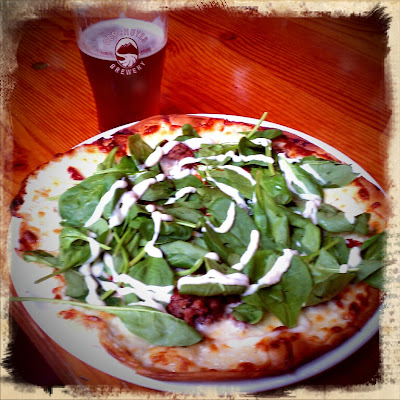 I love garlic, so this really hit the spot and I am definitely going to try to recreate it at home ASAP. 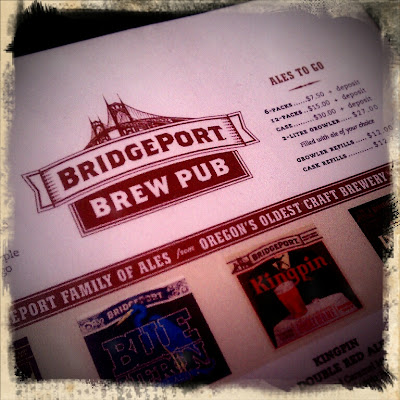 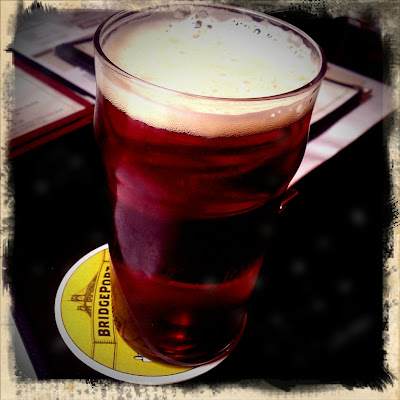 The first beer I got was their Kingpin Double Red Ale, and it was a little hoppier then I was expecting, but still very good. For my second beer, I actually got the same thing except it was cask-conditioned, so it was still Kingpin but it had finished aging in a cask which helps improve the flavor. 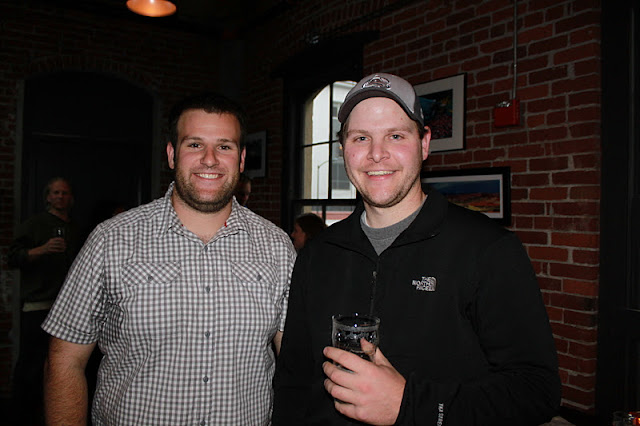 Unfortunately we didn’t try any food at BridgePort, but we did get to meet up with one of Cam’s good friends from high school and I got to brag about how much better the Detroit Red Wings are than the Colorado Avalanche. (You can’t really tell but he’s wearing an Avs hat in this pic) Good times. 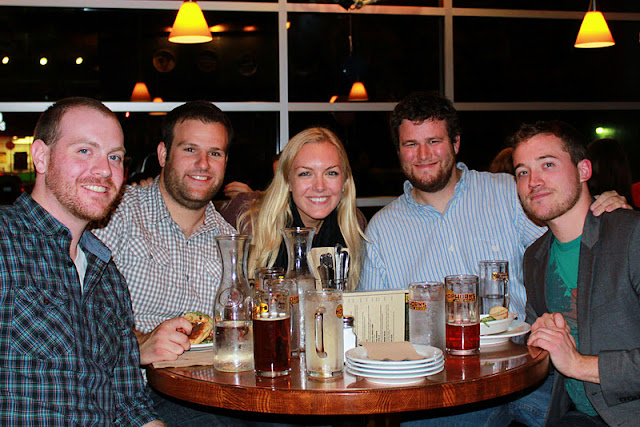 4. Hopworks Urban Brewery: This was our last stop on Friday night, and although I had been to HUB (that’s what it goes by for short) before, it was good to make another trip back. A lot of people in Oregon are very into biking, and this brewery is completely bike themed. (And I love anything themed, so obviously I’m a fan) 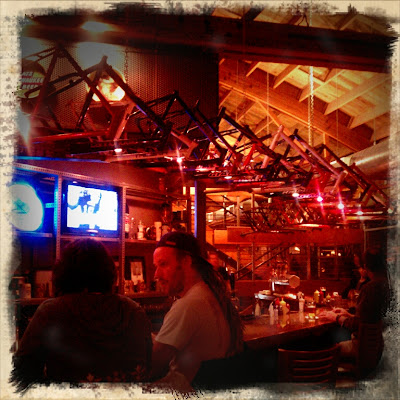 There are bike frames hanging all above the bar which I think looks really cool, and it’s a got a fun atmosphere that’s good for a group. 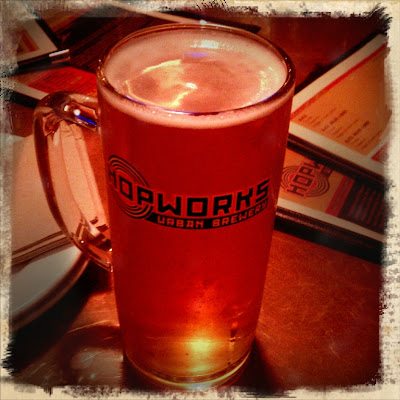 We all shared a bunch of food and I had their Pilsner, which was just alright. Hub’s beer is good, not my favorite in terms of just the beer alone, but overall it’s worth checking out. Plus they are in a different part of Portland, so if you’re interested in exploring the city this would be a good stop. 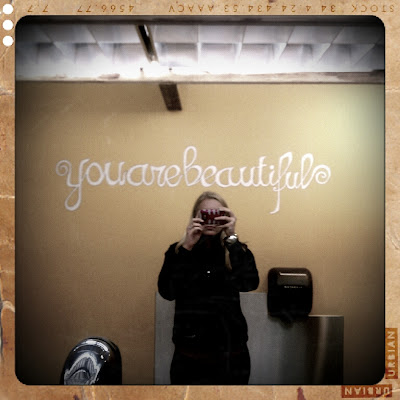 Plus, they had this on the wall in the womens’ bathroom, and I had to take a picture because I thought it was a really cool idea. I love the idea of painting a phrase backwards on the bathroom wall so it shows up when you look in the mirror, I just think it’s a cute whimsical touch. 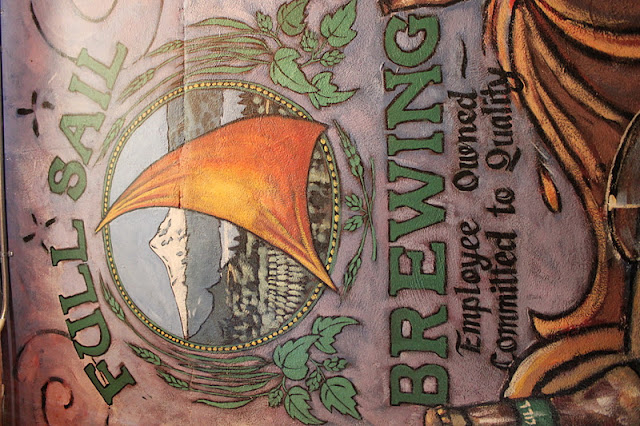 5. Full Sail Brewing Company: Saturday, we drove all over the place to show the guys some different cool things about Oregon, and we made a pit stop at Full Sail Brewing Company in Hood River, OR. I had never been here before, and I really really liked it. The brewpub has great views of the Columbia River Gorge and everything was windsurfing-themed, which I thought was really unique. 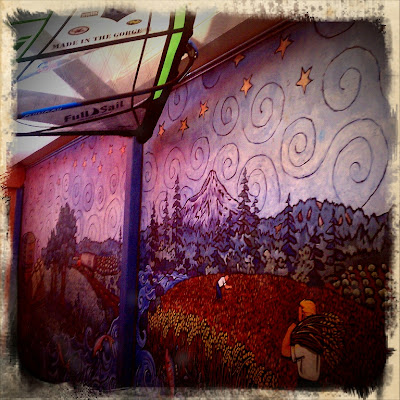 Their beers have apparently received a lot of awards, so I had pretty high expectations going in. I tried their Wassail, which was described as a malty full bodied beer and a pleasantly hoppy finish. 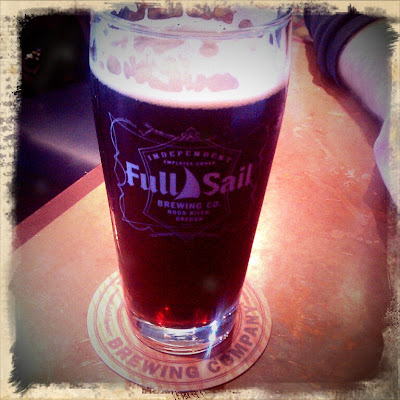 I thought this beer was really good and very well-balanced. Since we had already eaten lunch when we stopped here we just ordered a few snacks, but the food seemed to be pretty good as well. I also really liked the great art work they had all over the walls. 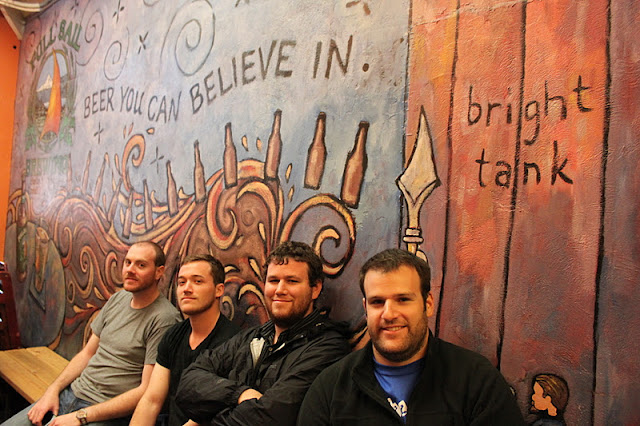 This place would make a great day trip from Portland if you’re out exploring the Columbia River Gorge area (which you definitely should if you’re in Oregon!) and Hood River is a cute little town.
If you’re still reading this, thanks for listening to my excessively long summary of Oregon craft beer. I always start out with the intention to just write a quick little post, and then I end up writing forever. Brevity is not my strong suit. Anyway, overall I’d have to say that Deschutes is my favorite Oregon brewery because I think that they have the best beer, and their food is amazing. The End.
Now time for the joke I promised you…since we are talking about Oregon, here is the best hipster joke I’ve ever heard that Cam’s friend Brian told me this weekend:
“How many hipsters does it take to change a lightbulb?”
Answer: “It’s a really obscure number, you’ve probably never heard of it.”
Hilarious. Xoxo.
﻿