So I was originally planning to link up with From Mrs. to Mama next week, but after seeing so many of your love stories, I decided I just couldn’t wait! I thought this was such a sweet idea, and I’ve loved reading so many of my favorite bloggers’ answers to these questions. The link-up is open through Valentine’s Day…which is less than a week away!
Here is our love story 🙂
How long have you and your significant other been together?
We’ve been together four years…in a way it seems like we’ve been together forever, but in a way the time has flown by. This is actually our 5th Valentine’s Day together though, because we started dating in the beginning of February and Valentine’s Day weekend 2008 was kind of when we made it official, like bf/gf status…ha. 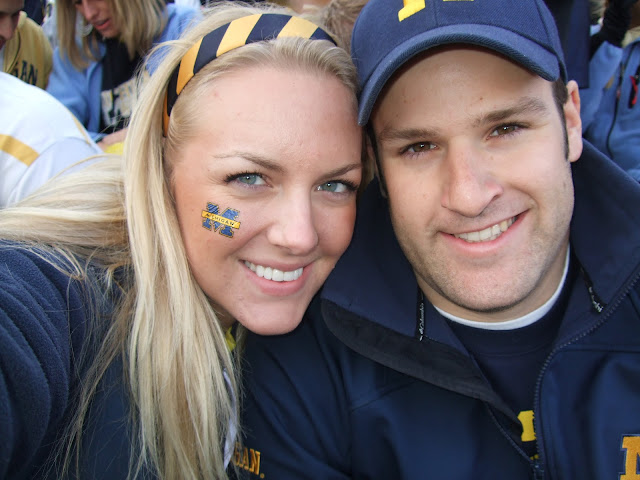 If married, how long have you been married?
We got married on June 6, 2009…almost 3 years ago!

If you are married, where did you get married at? Big or small
wedding?
We got married at First Presbyterian Church in Ann Arbor, Michigan which is right by U of M’s campus and our fraternity/sorority houses. We had our reception at the Ann Arbor City Club, which is also right near campus. We had what I would consider a medium-sized wedding (about 175 people) and it was so wonderful to be able to celebrate our love with all of our family and friends!

You can find out more about the details of our wedding here.
Do you
have any nick-names that you call one another? Do share!
Honestly, there are too many to share! We are both always calling each other random nonsensical words that usually have something to do with rhyming the other persons name to something, it’s so silly but it amuses us to no end (and we do it to the dog too). In high school, some of my good friends called me Janus (so dumb haha) and ever since they mentioned it to Cam, he likes to make nicknames out of that…like Janus Joppelganger and just really random things. He also calls me all sorts of normal sweet nicknames, Sweet Pea is probably my favorite. I call him Cameron Bear quite often.
Name 3 things you love most about your honey.
1. His integrity
2. His intelligence
3. His eyes/long eyelashes
4. His sense of humor
5. How well he loves me

(I couldn’t decide on three!)
8. Is he a flowers and teddy bear kind of guy for v-day, or strawberries, champagne, and rose
petals?
Cam is a flowers/wine type of guy, mainly because he knows that I love getting flowers! He usually sends them to me on my birthday and on Valentine’s day, so we’ll see if that tradition continues!
9. Are you a sunset dinner on the beach kind of girl, or pop a
movie in and relax on the couch?
I would definitely enjoy a sunset dinner on the beach, and we’ve definitely enjoyed a few of those over the past 4 years. However, I so love just being in my sweats, cuddled up on the couch, and watching a movie together especially in the winter! It’s so cozy and I love that it’s a simple pleasure we can enjoy on a random weeknight.
10. Tell us one thing you’d like to do with your significant other one day. If
you could do anything? Go anywhere?
If you’ve been reading my blog for awhile, you know that Cameron and I love to travel. Fortunately, we’ve gotten to do a lot of it together (both domestic and international), however, there are still so many places we haven’t seen. If we could go anywhere, I’d love to go to Thailand/Israel/Norway/Argentina/Fiji/Slovenia/Turkey/Croatia/Brazil/New Zealand/or back to Italy/France/Switzerland…any of those would be great!

11. Tell us what you plan on doing on this Valentine’s Day.
Originally, our plan for V-day was to stay home and cook a nice dinner…but since I’ve been working from home, I’ve been in the house pretty much all.day.every.day. Which is why I recently decided we should change our plans and go out to dinner instead so I can actually have a reason to change out of workout clothes…and by workout clothes I mean pajamas (let’s be honest). Cam is in charge of making the reservations, so I’m not sure where we’re going…I want to be surprised!
12. Are you asking for anything this Valentine’s day?
We don’t generally exchange big gifts on Valentine’s Day, usually going out for a nice dinner is our gift to each other. All I really want is a card for Valentine’s Day, I love getting cards and I save them all. We always get each other birthday, Christmas, and Valentine’s Day cards and they’re definitely something that I cherish. Cam and I are both the kind of people where if there’s something we really really want, we just buy it so we don’t do a lot of presents for each other. We’d rather spend the money on travel versus buying each other big gifts.
13. Give us one piece of advice of keeping a relationship strong and
full of love.
Show grace towards one another, and forgive when the other person has made a mistake. I tend to have a little bit of a temper and get mad over silly things, and then I hold on to that anger much longer than I should even after Cam apologizes. Cam is very good about genuinely forgiving me after I apologize for something and not holding a grudge, and I’m slowly but surely learning to do this. Life is way too short to bicker over stupid things, so I think the sooner you can just let go of the little stuff, the more time you can spend being happy and just really loving each other.
14.  Show us a picture of what love means to you. 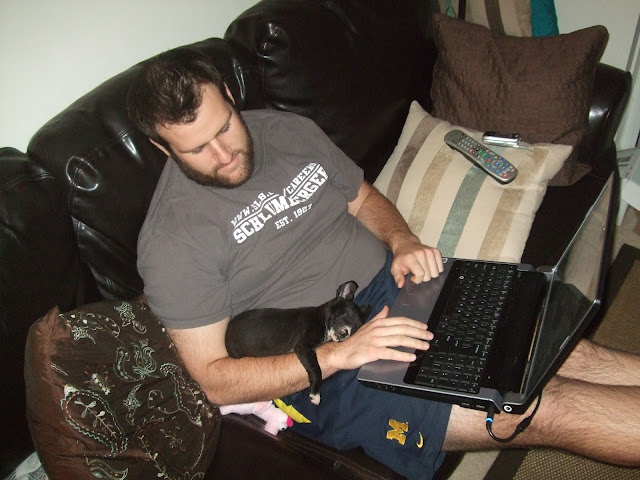 So there you have it, that’s our story! 🙂
Let me know if you’re linking up because I’d love to read yours! Have a great day everyone! Xoxo