So I’ll admit, over the past month, I had been a tad down on life in Tahoe.
We literally live on top of a mountain so it’s very remote, the roads are crazy steep, our cell reception is awful, there is no real shopping within 45 minutes and no mall within 90 minutes, and overall it’s just very different than the suburban lifestyle I’m used to.
However, Tahoe and I made huge strides in our relationship this weekend, because I finally saw this… 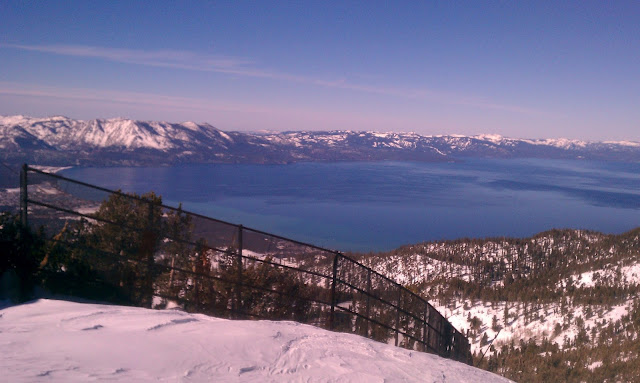 I’m in love.
That’s the view I saw from the top of the mountain when we were skiing yesterday, and it literally took my breath away. (My cell phone pic doesn’t do it justice!) So while there may be certain aspects of life here that are a bit of an adjustment, the fact that the chairlift to take me up to this amazing view is literally less than 5 minutes from my house is pretty incredible.
But more on skiing in a minute.
Time for a little weekend recap! This weekend was pretty low-key, relaxing, and not super productive…and that’s ok by me. Cam and I got sucked into a few too many reruns of The Big Bang Theory (TBS is airing it like nonstop these days!) and Tosh.O (so raunchy, yet so hilarious), and it was nice to have some downtime.
My weekend started out with a special delivery–my new skis! I know nothing about ski stuff, but luckily my brother-in-law is extremely knowledgeable and managed to find me a great pair of skis that someone was selling out in Oregon. They got delivered Friday afternoon, and while I know nothing about different kinds of skis, I love the way these ones look…and that’s what matters to me! Aren’t they pretty? 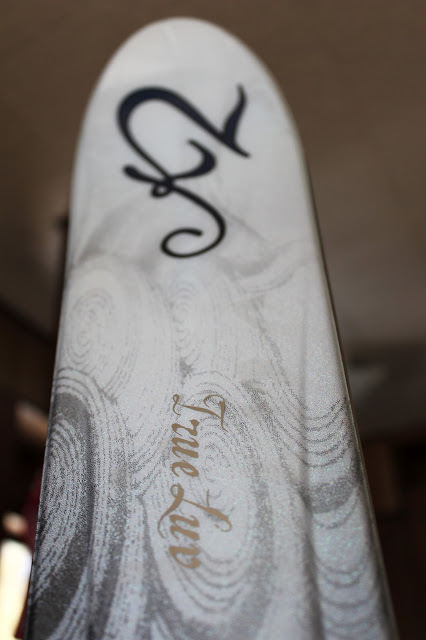 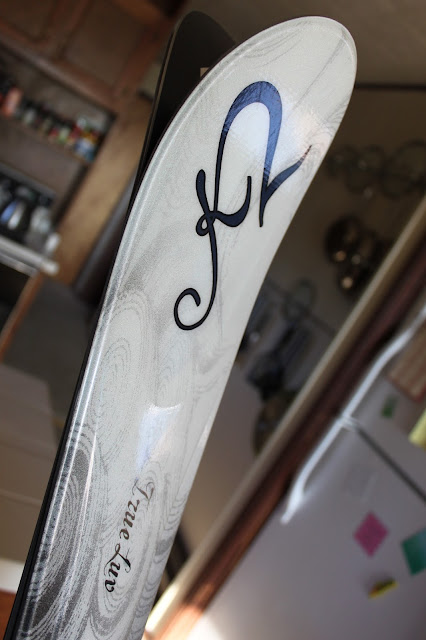 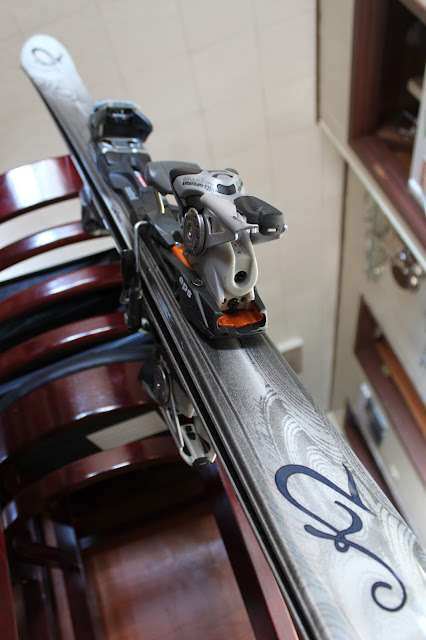 Friday night we just stayed in and chilled, but Saturday morning we finally did something I’ve been wanting to do for a long time–snowshoeing! 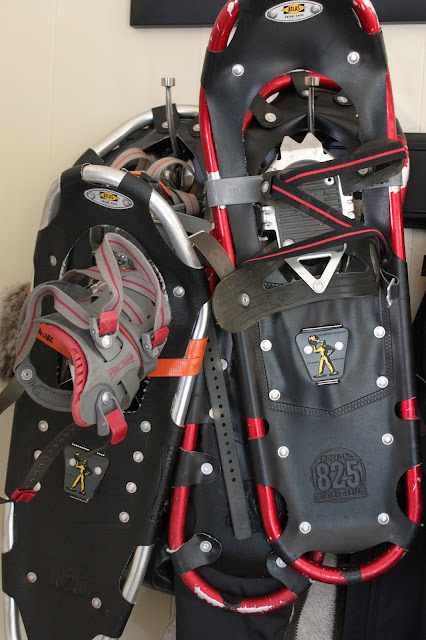 We had never tried snowshoeing before, but I really enjoyed it. It’s honestly just walking…in the snow, there is no real skill involved aka my kind of sport. Cam and I both love hiking and so it was nice to get out “hike” a part of the Tahoe Rim Trail. Although we didn’t end up seeing any animals, we saw a ton of different tracks in the woods. It was a perfect sunny day, and the woods were so extremely peaceful. 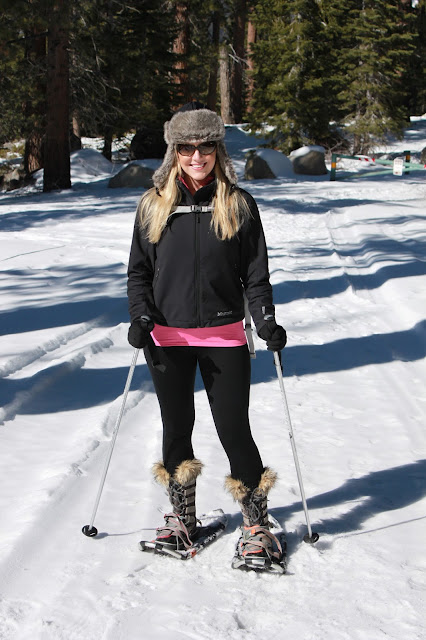 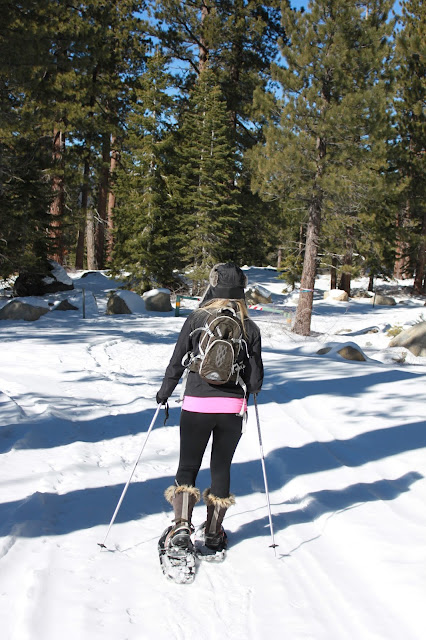 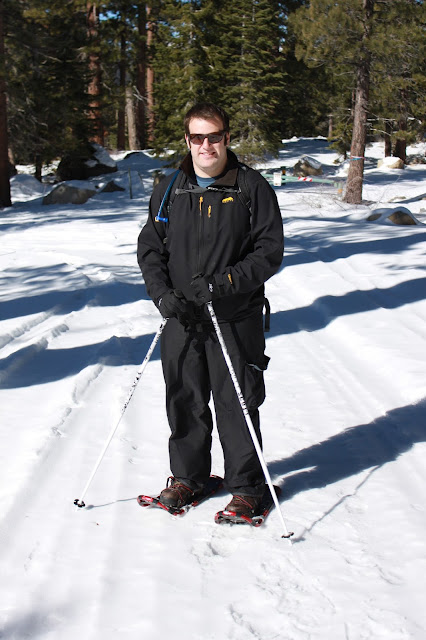 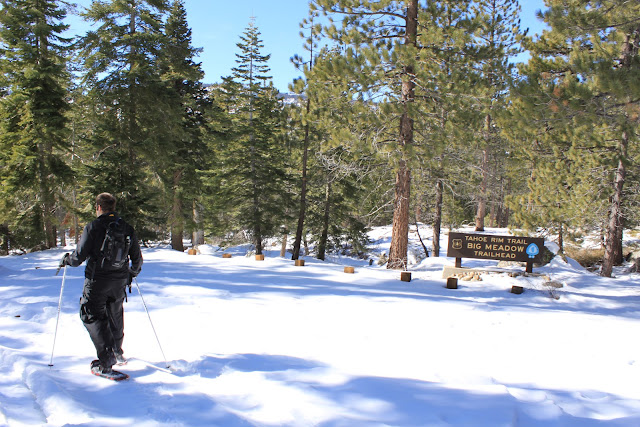 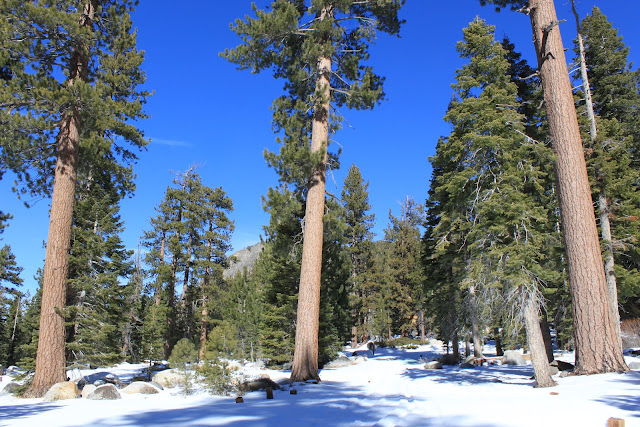 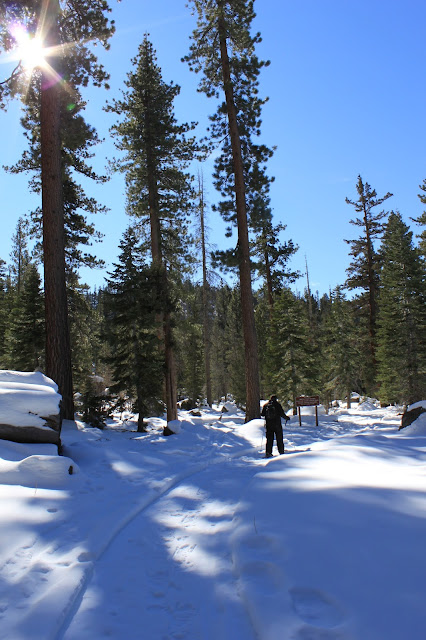 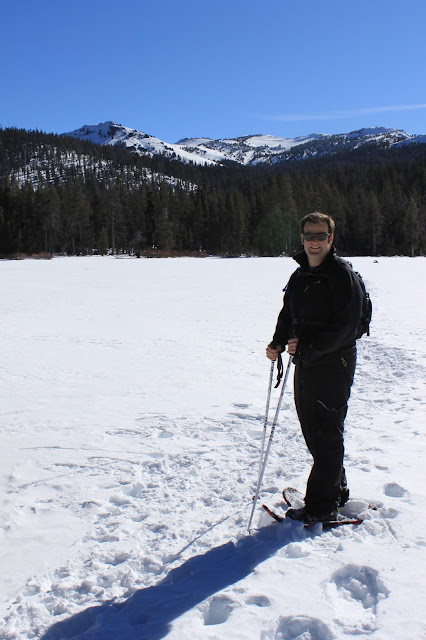 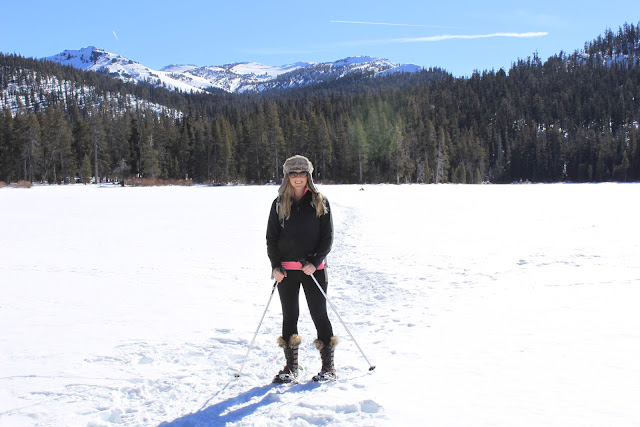 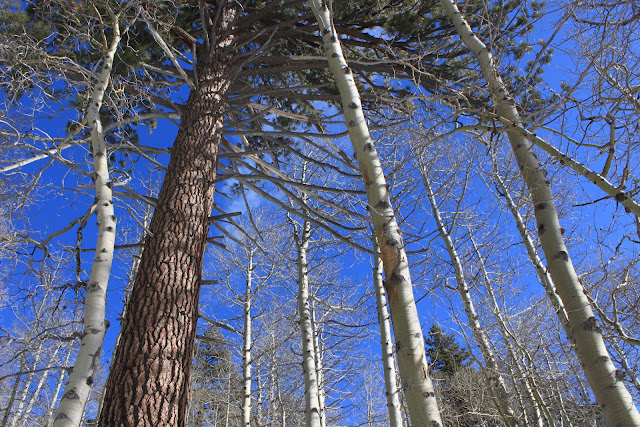 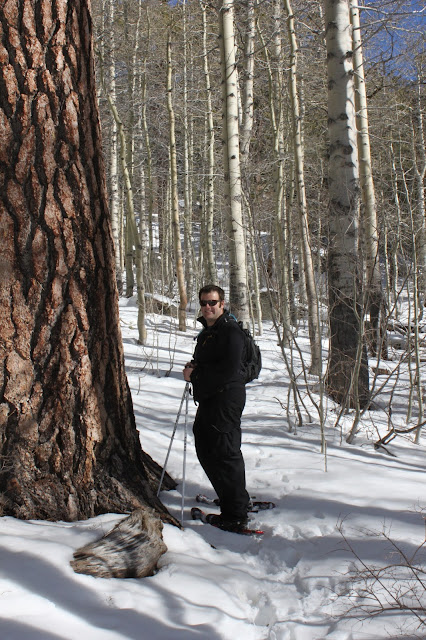 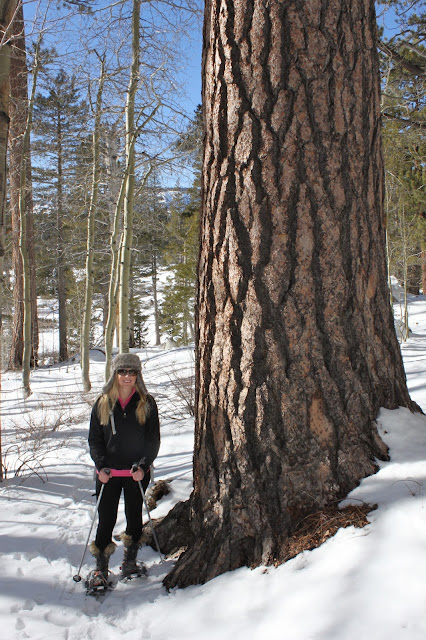 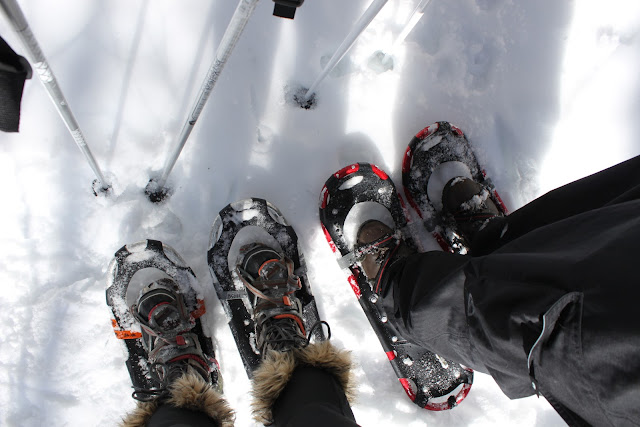 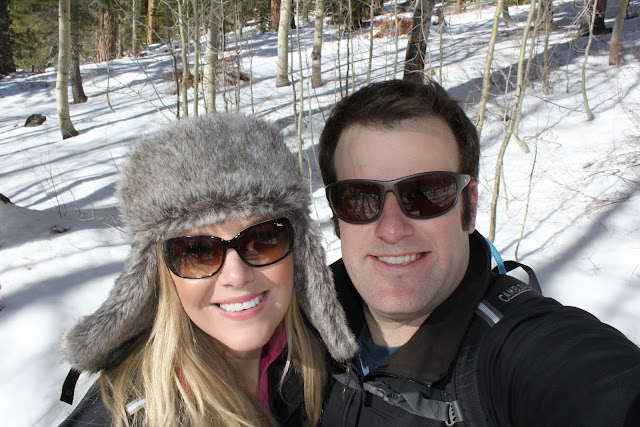 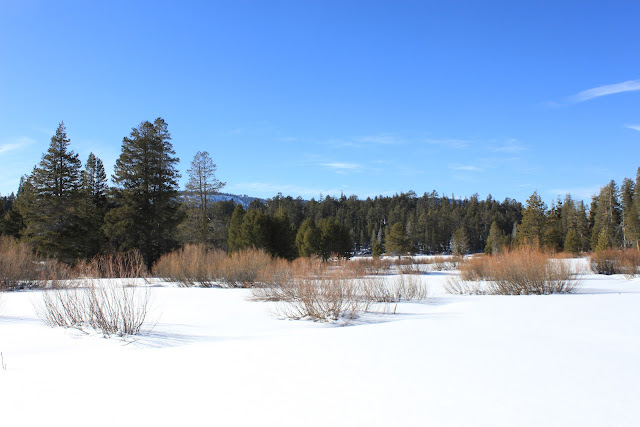 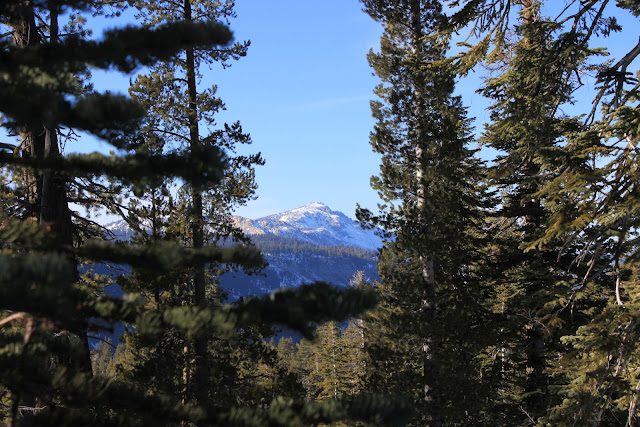 The rest of Saturday, we pretty much continued our relaxation/TV theme until we got the bright idea to run to the grocery store to pick up some food on the shopping list for watching the Superbowl…at 11PM. Since we had planned to go skiing on Sunday we didn’t want to have to deal with going afterwards, and when we realized our grocery store is open 24 hours we just decided to get it over with. Late-night grocery shopping on a Saturday night, it doesn’t get much more wild than that.
We live on the edge people.
(Honestly though, it wasn’t half bad. The store was empty and it was oddly fun…definitely won’t be an every Saturday night thing, but it was kind of nice change of pace)
Sunday morning, we got up bright and early to hit the slopes! (Also, we still have to find a good church here in Tahoe…need to get on that ASAP!) We live super close to the chairlifts for Heavenly ski resort on the Nevada side, and it’s neat because you can actually ski over to the runs on the California side since Heavenly sits in the middle of the two states. Cam and I have season passes, and we’ve both finally accumulated all the ski gear we need so we can just drive to the lift and get on the chairlift without the hassles of having to rent anything or buy lift tickets which is awesome. We’d gone skiing once before since moving here, but the weather was bad and we only ended up doing a few runs. Yesterday’s weather, however, was AWESOME. Blue skies, sunshine, and while the snow wasn’t great (it hasn’t snowed here in forever!) it was still a beautiful day and we ended up doing a bunch of different runs on the Nevada and the California sides of the mountain. 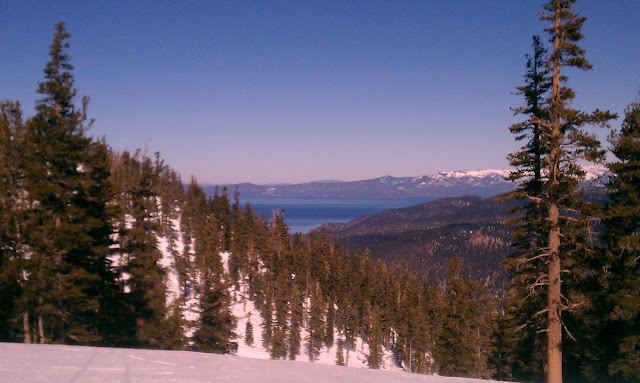 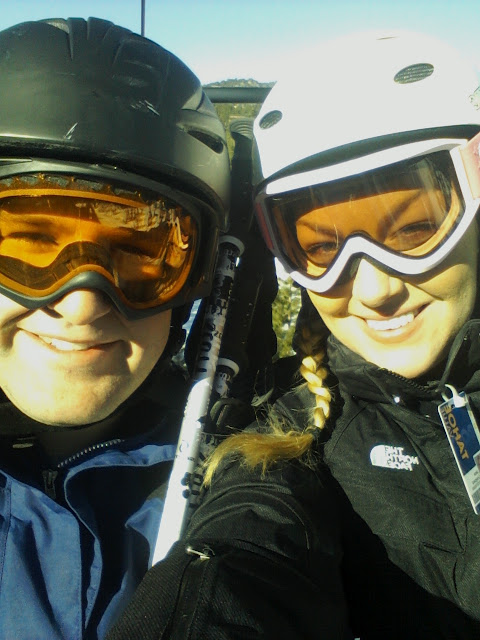 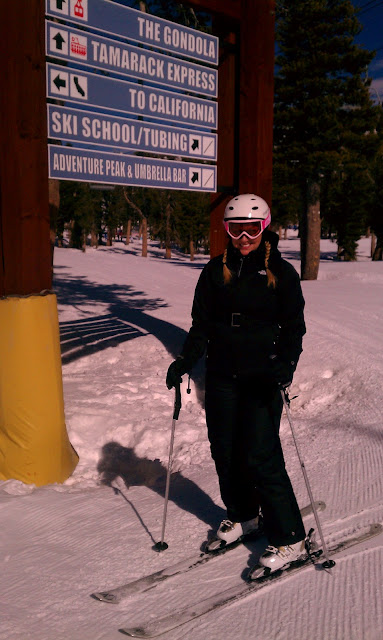 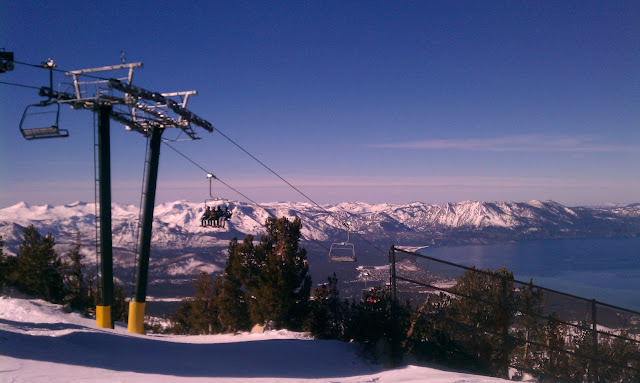 Now let me just say this, I am not a good skier…yet. It’s not something I grew up doing, so it still feels pretty foreign to me and I really don’t like going fast because I hate feeling like I’m out of control. However, I think it’s healthy to do things that are out of your comfort zone and push you to grow as a person. I remember when I started cross country in high school, I never thought I’d be able to run 3 miles…and just a few months ago I ran a race that was over twice that distance! So I know if I just put my mind to it, I’ll get it eventually. So although skiing scares me a little bit now, when you’re at the top of the mountain looking out and the most unbelievable view of the lake, it makes that little bit of fear totally worth it! Plus, I like that it’s something Cam and I can have fun doing together, and it’s great exercise (aka I’m sore today!). I was definitely more anxious on the runs in the beginning of the day yesterday, but by the afternoon I already felt like I had gained a lot of confidence and was doing much better. I’m really excited to keep going back and hopefully keep improving!
One of the things I love about having a season pass is that the pass itself has a little chip in it that allows you to track everything you do on the mountain. You can go online or download an app for your phone that syncs up with your pass and allows you to see how many vertical feet you’ve skied, which runs you’ve done, etc. But my favorite thing is that they have professional photographers take your picture at different spots on the mountain, and then just by scanning your pass, they can upload automatically to your Facebook! (Technology never ceases to amaze me…) Here are some of our pictures from yesterday:

Snowshoeing, skiing, and kissing on top of a mountain all in the same weekend. This is my life now and I’m not complaining 🙂
And last but not least, yesterday we had our friend Aaron over to watch the Super Bowl! Aaron was one of Cam’s roommates senior year of college, and now he coincidentally lives in Reno, so it was great to see a familiar face. I wasn’t really rooting for either team, and I didn’t find the commercials to be particularly interesting this year. I only half-watched Madonna’s performance because I was too busy chatting and cooking! I completely forgot to get any pictures of people during our Superbowl get-together, but I did take some pictures of the food and I’ll be sharing those recipes tomorrow!
See ya then! Xoxo