Well folks, another weekend on the books, another week fresh with possibility is just beginning. How was your weekend?
Ours wasn’t super eventful, but it flew by just the same. Friday night, we headed down to Reno to stay with our friend Aaron in preparation for Cam’s exam on Saturday at the Reno-Sparks Convention Center. He had to be at his exam at 7:15am on Saturday morning, and since the convention center is about 90 minutes from our house, it made sense for us to stay down in Reno the night before. His exam took the entire day, which meant I had lots of time to drive around Reno and have a day to myself. I’ll admit, my first impressions of Reno from when we moved here were not the best. Honestly, I thought it was just a crappy city and I didn’t anticipate spending much time there. However, after this weekend I was pleasantly surprised. As far as cities go, they have all the normal suburban conveniences you could want, there are some really interesting local restaurants, and beautiful views of the mountains. There are some really nice neighborhoods and the cost of living is really low. On Saturday, I was able to do some shopping at Whole Foods (I’ve missed that place!), I took a Zumba class, had lunch a great local place, got some frozen yogurt (so good!), and went shopping at the outlet malls. Simple pleasures, but oh so enjoyable. I’m actually excited spend some more time in Reno in the future, and hopefully I’ll do an more in-depth post!

Saturday night after Cam’s exam, we went out for dinner with our friend Aaron at an all-you-can-eat sushi restaurant and it was AWESOME. We definitely took advantage of the all you can eat deal and ordered a ton of different rolls between the three of us, and finished them all. I am literally still full two days later. Let’s just say between all-you-can eat-sushi and self-serve fro-yo, Saturday was definitely a day off from the Paleo diet! I didn’t take any photos this weekend, and it was really nice to just unplug a little bit. I love taking photos, but sometimes it can get to the point where it feels like an obligation, and that’s not fun so sometimes it’s nice to just put down the camera/cell phone.

Speaking of unplugging, Cam and I have decided we’re going to try something new at our house…No TV Mondays!

Sometimes, I feel like we have the TV on in the background constantly, and it can get tough to turn it off. For instance, we’ll watch something on Food Network liked Chopped (love that show!), and as soon as it’s over another episode will come on, and we’ll get sucked in. It’s just a vicious cycle of wasted time and us staying up later than we should at night. So in order to get our week off to a good start, we’ve decided that Monday is going to be our no-TV night, which means no TV at all the entire evening. We tried it for the first time last week and it was great; peace and quiet, we both did some reading, and we actually got in bed at a reasonable time. We want to make it a regular thing and I’m really excited about it actually.

Often I feel like I’m kind of tired coming in to the week after having a busy weekend, and then my work week starts off with a lack of focus and isn’t as productive as it should be. Then by Friday, I’m running around like a chicken with my head cut off trying to wrap things up for work, and I go in to the weekend totally drained. And then the cycle just repeats itself. I’m hoping that starting our week with a nice quiet Monday where I get a good night of sleep will be a way to just improve the week overall. I’ll let you know how it goes!

Finally, so this isn’t a totally picture-less post, I’ll leave you with a few photos from our day of skiing yesterday. Although I never used my camera this weekend, we did get a few pictures taken while we were skiing at Heavenly because the weather was completely gorgeous. The sky and the lake were so blue. I have to laugh at these photos because the photographer had us positioned on the hill so that Cam looks like a midget! 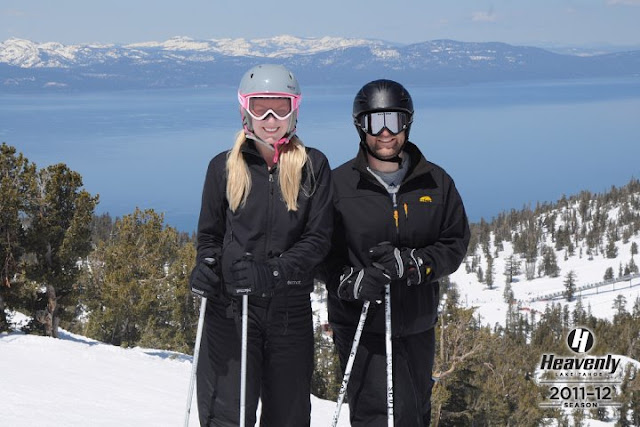 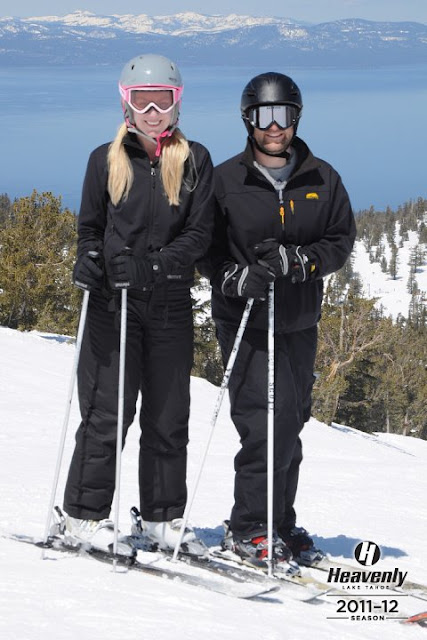 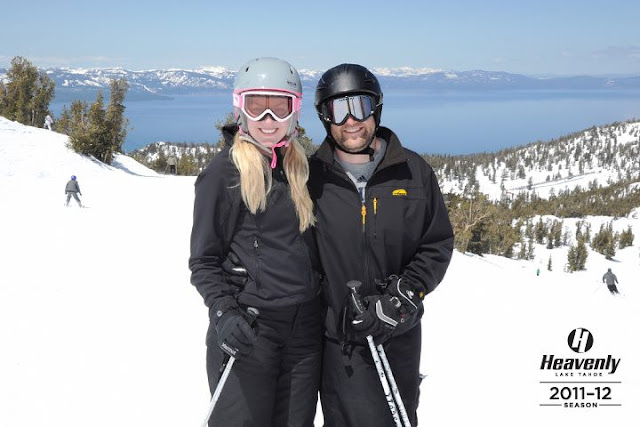 We had such a great day skiing, even if the snow was a little slushy because it was so warm! I’m still not a great skier but I feel like I’ve improved so much since the beginning of the season. And as much as I complain about certain aspects of living here in Tahoe, when the sun is shining and I’m on the chair lift looking at the lake and the mountains, and I realize that I’m not on vacation but this is where I actually live now, I kind of love it.

My parents are coming in to town on Friday for a visit, and so I’m hoping that the next few days fly by because I’m really looking forward to spending some time with them and showing them Tahoe!

Have a great week everyone!