Happy Monday everybody! How was you’re weekend? Mine was lovely but way too short…as always!

This weekend I did not take one photo and it felt really nice to just have a low-key few days at home. Friday night, I convinced Cam to go buy a lottery ticket with me for the Mega Millions jackpot (something totally out of character for us). We got to 7-11 about 45 mins before the drawing and there was a huge line of (interesting looking) people waiting to buy tickets. Sadly, we didn’t win…oh well! Saturday, we slept in until 10 am, something I haven’t done in ages…it felt so great! It started dumping snow at our house around noon, so we decided to tackle some pesky to-dos around the house and Cam did our taxes (and we’re getting money back…woo!). By dinnertime, I was going a little stir crazy and craving some Mexican food so we decided to venture out for dinner. It was still snowing like crazy and as we were driving down the road to the restaurant they were actually in the process of closing it because the conditions were so bad. This would probably be a sign to most people to turn around, but my hubby loves the challenge of driving in the snow so on we went, we got our Mexican food (which was so delicious!!), and the road was back open by the time we headed home. Yesterday, we decided to take advantage of all the snow and went skiing. This was the first day I’ve gotten to ski “powder” this season and I really had no idea what I was doing, but it was probably one of the most gorgeous sunny days we’ve had this season. I was tempted to snap some photos, but since it was freezing and I didn’t feel like taking of my gloves, I opted to just enjoy it instead. I love taking pictures but sometimes it’s all to easy to get caught in trying to document every great thing that happens that it’s easy to forget to just be in the moment, and besides, no camera could do yesterday’s views from the chairlifts justice! Our weekend finished up with a trip to the grocery store and watching the finale of Worst Cooks in America on Food Network. Overall, an uneventful weekend but completely awesome.

So now that I’ve got that weekend recap out of the way, I wanted to share some more photos from our weekend in San Fran! (You can see my first post here) Today I wanted to talk about some of the delicious eats we indulged in while we were there. So far we’ve been doing really well sticking to the Paleo diet at home (I’ll have an update on that next week!) but when we travel, we definitely like to indulge a little bit and SF was no exception. After having a lovely French dinner in Sacramento, we I decided that getting some fro-yo was first on the agenda when we got into San Francisco. (South Lake Tahoe is sadly devoid of frozen yogurt joints!) Thanks to my trusty Yelp app, we found a great place called Loving Cup in the Nob Hill area of the city. 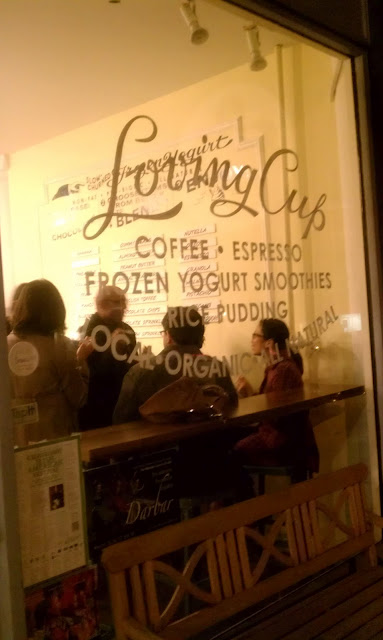 They make their frozen yogurt with local organic ingredients, and they also make homemade rice pudding in assorted flavors. Their frozen yogurt only comes in chocolate and vanilla, but they have a wide variety of mix-ins they can swirl into the yogurt for you. 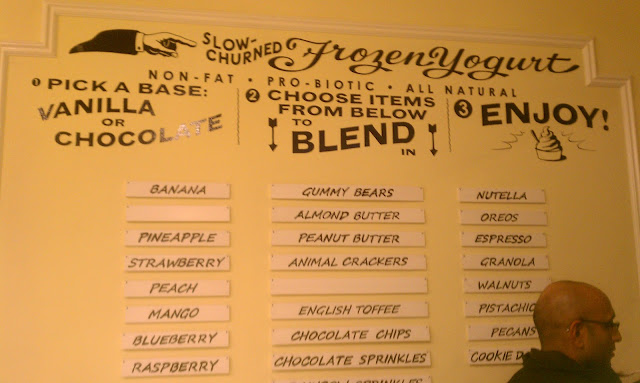 I got vanilla ice cream mixed with Nutella and Oreos and it was literally one of the best things I’ve ever eaten. Cam got some sort of Mexican chocolate rice pudding that was good, but nowhere near as incredible as my frozen yogurt. Definitely check this place out if you’re in San Fran! 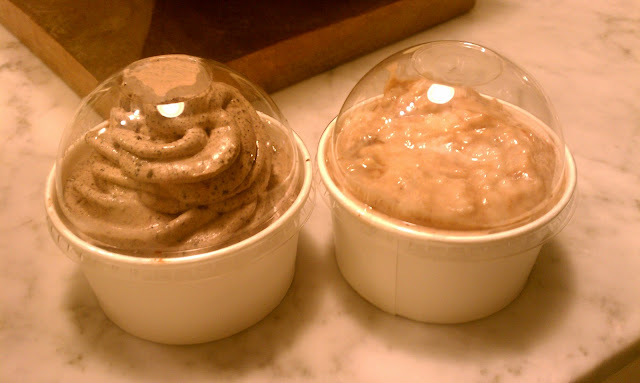 Saturday morning, we grabbed a quick breakfast at the Ferry Building Farmer’s Market, and then did lots of walking around the city. We were planning to grab lunch somewhere around Fisherman’s Wharf, but were worried about being sucked into a touristy place that would be mediocre. Once again I consulted my Yelp app and it led us to The Codmother Fish and Chips food truck! 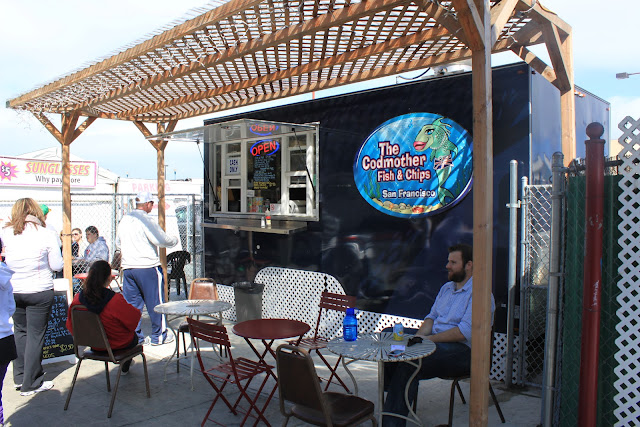 Since it was nice and sunny, we figured it would be fun to sit outside and this place had great reviews. Cam got an order of fish and (garlic) chips, while I went for the fish tacos. We each loved what we ordered (and I’m super picky about fish tacos–they’re one of my favorite foods!), and since it was a food cart, everything was uber cheap! 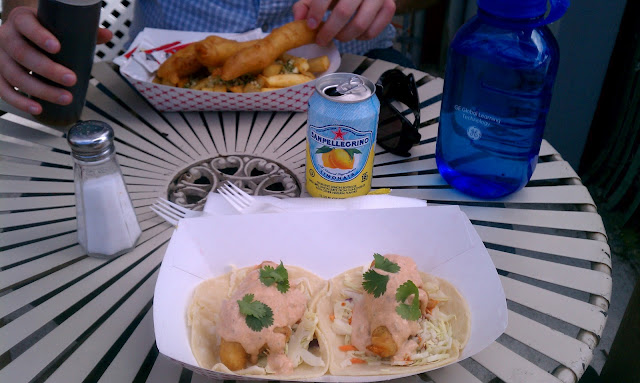 A lot of places will give you a free item if you check in on Yelp, so we decided to do that and were rewarded with these: 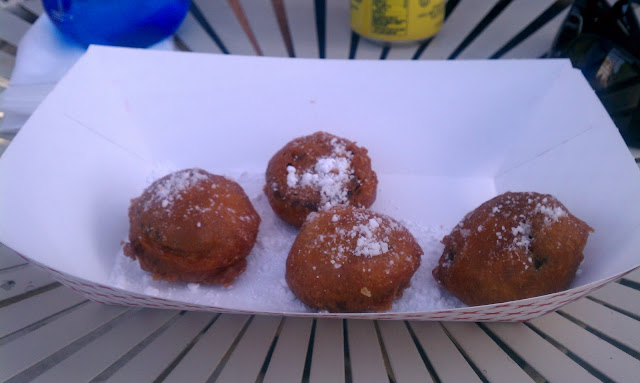 I had never tried them and thought they sounded a little gross, but they were seriously amazing. The heat melts the chocolate cookie a little bit and it tastes like heaven in your mouth. If you are in the mood for fish tacos/fish and chips, you’ve got to check this place out!

Later on Saturday afternoon, we drove over to Sausalito…and I had this cookie.

I don’t remember where I got it, I normally don’t like white chocolate, and I don’t know why I took a picture of it. But I ate it all and it was fantastic, so I thought it should be included in this post. 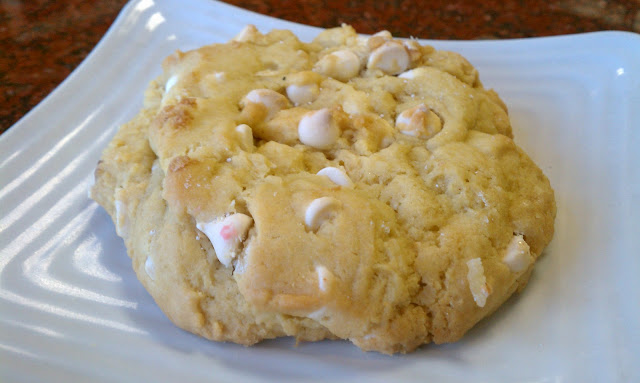 Moving right along…Saturday night, we had a really hard time deciding where to eat dinner. We had been walking around all day and were pretty tired, but still wanted to go some place semi-nice/unique. While we were trying to make up our minds, I decided that we needed a picture in our going out to dinner outfits, but since Lola lacks opposable thumbs we didn’t get one together. 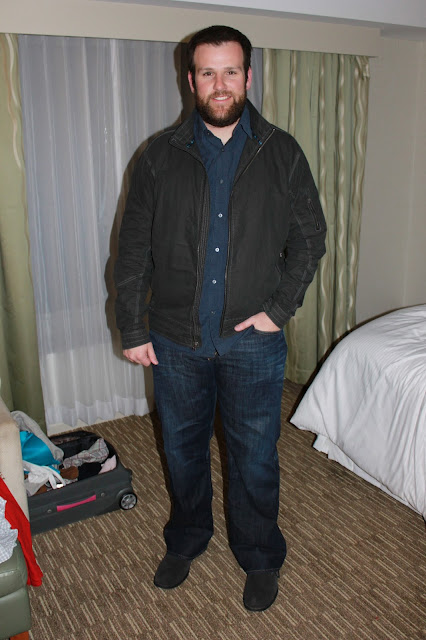 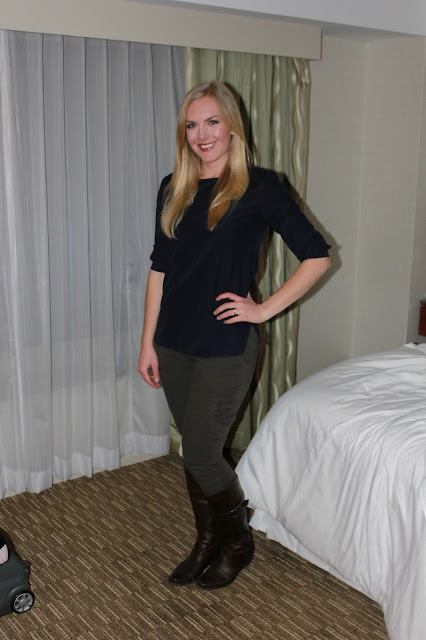 We finally decided on a place called Skool, which is located in (what seemed like) an artsy part of the city. The restaurant had a very trendy vibe, and I really liked the atmosphere. (I took this photo as were were leaving, the place was packed when we got there!) 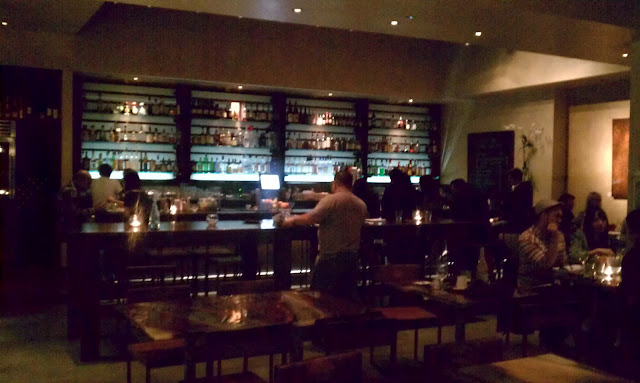 We called and made a reservation before we left the hotel but got to the restaurant a little bit ahead of time, so we had a drink at the bar while they were getting our table ready. I loved their inventive cocktail menu and I tried a savory drink called the Sancho Stiles which was absolutely spot-on. 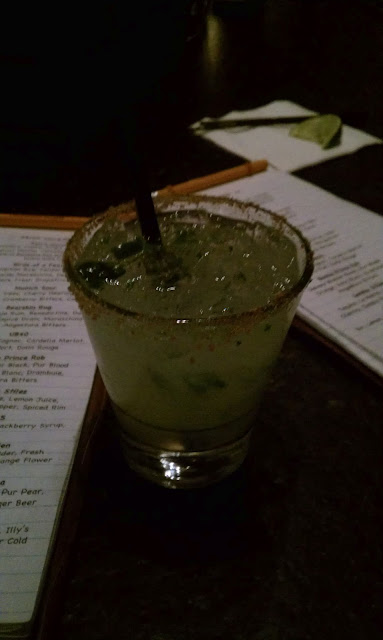 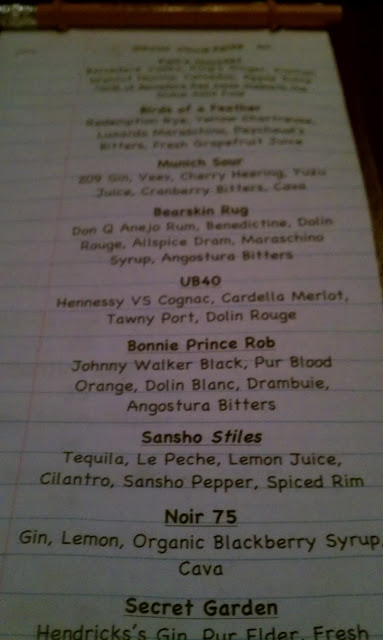 When we were seated, I had a hard time deciding what to order from the creative menu. (I also loved how the menus were clipboards with pencils on top…playing off the name Skool…get it? Because I didn’t make the connection until after dinner…ha!) 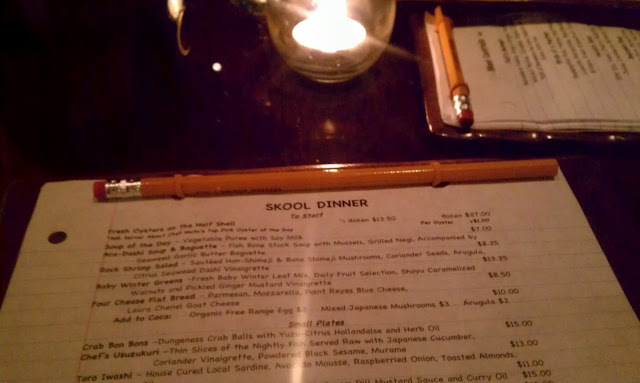 After much deliberation, here’s the dish I decided to go with was: 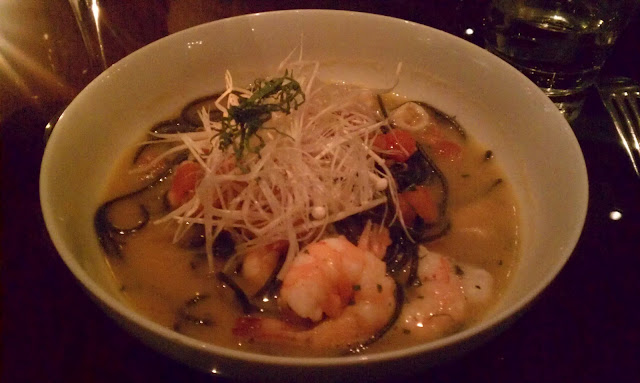 This dish was definitely different than what I usually gravitate towards at a restaurant, but the flavor was so complex and unique! The squid ink pasta was delicious and overall, I thought it was very well executed. And because we checked in at the restaurant on Yelp, we got a free dessert! (A yummy flan that I forgot to take a photo of, but I recommended this restaurant to Ashley and her hubby @ Adventures of Newlyweds when they went to SF after we did…they got the free flan too, along with some great photos!) 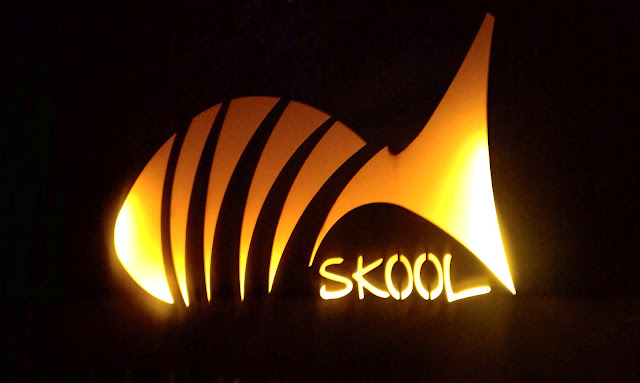 So there you have it, my favorite eats from our first trip to SF! We’ll definitely be going back so if you have any suggestions on where we should eat on our next visit, I’d love to hear them! Also, as you may have noticed I’m a huge fan of Yelp, and I use it constantly when we travel. I know some people prefer Urban Spoon, however, I think Yelp’s mobile app is much more useful when you’re in a city because you can quickly locate the best restaurants that are closest to where you are. I also love that you can get free stuff for checking in at restaurants, so if you don’t have this free app I’d highly recommend it!

Finally, I thought I’d leave you with a few more photos from another stop on our weekend in San Fran. Due to the not so great weather we woke up to on Sunday, Cam and I decided to head out of the city to explore more of the Bay Area. We ended up driving over to Palo Alto to check out Stanford’s campus, and although I still think that the University of Michigan has the best campus, Stanford is seriously beautiful. I think it’s a lot of fun to check out different college campuses, plus Stanford is one of the places that Cam has kicked around the idea of applying to for grad school down the road. I loved all the palm trees and pretty buildings, and their cathedral is breathtaking…here, see for yourself! 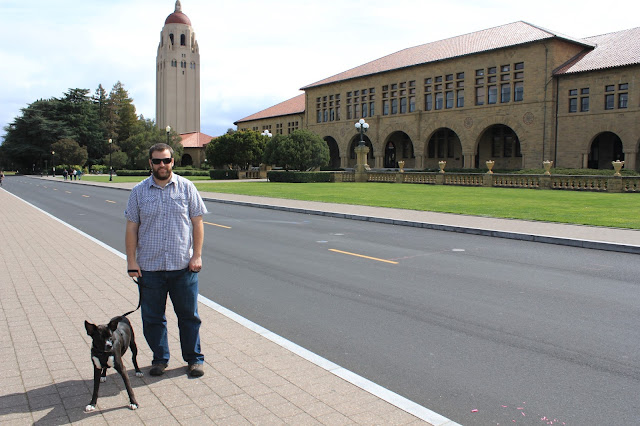 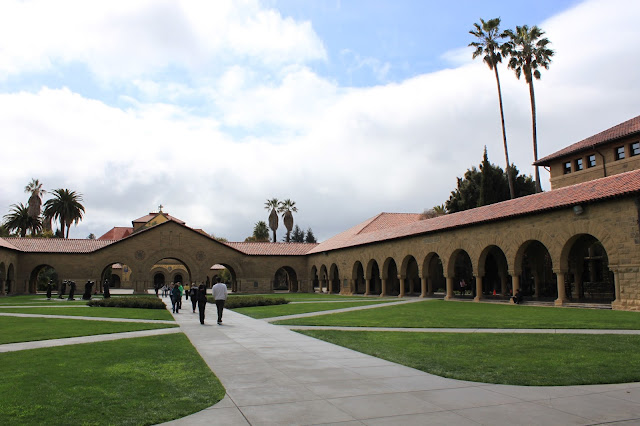 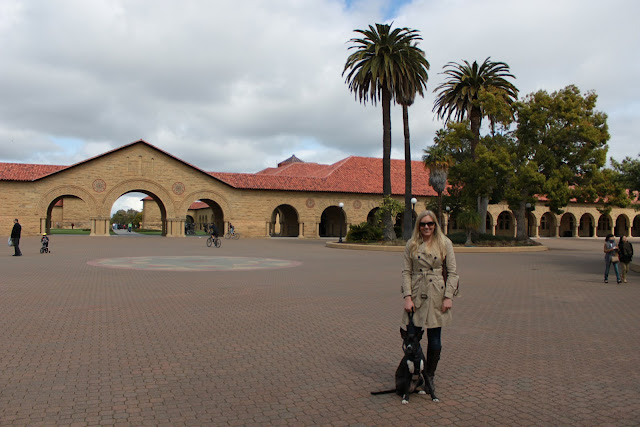 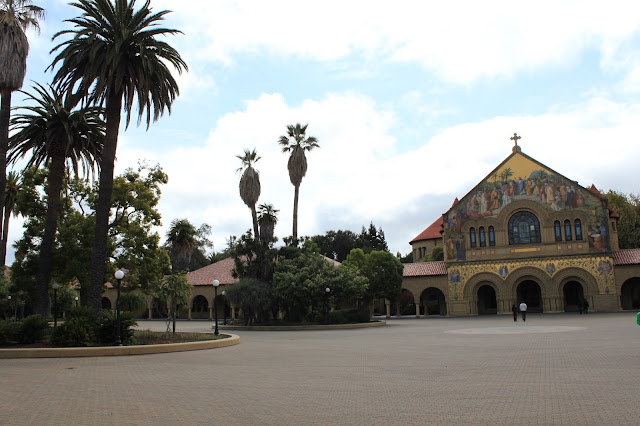 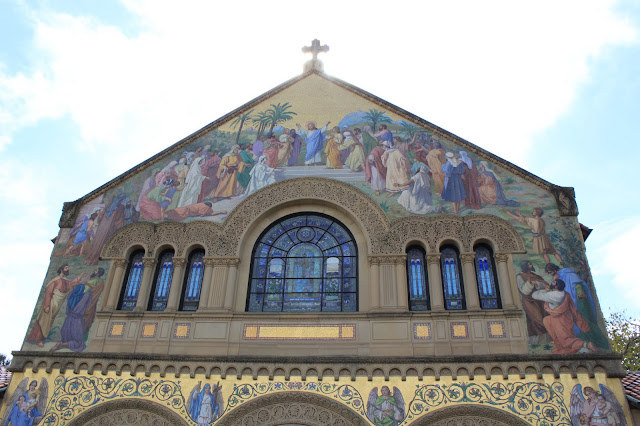 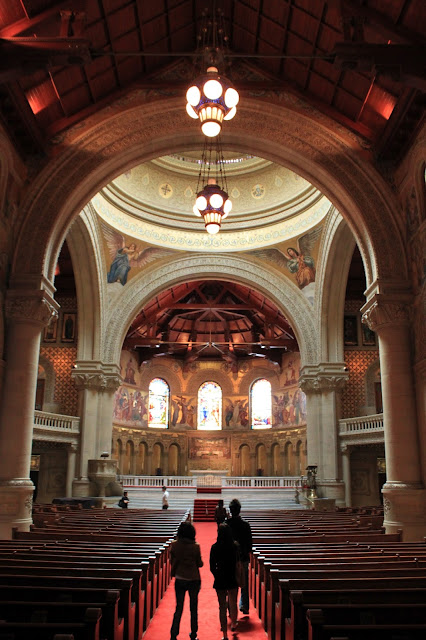 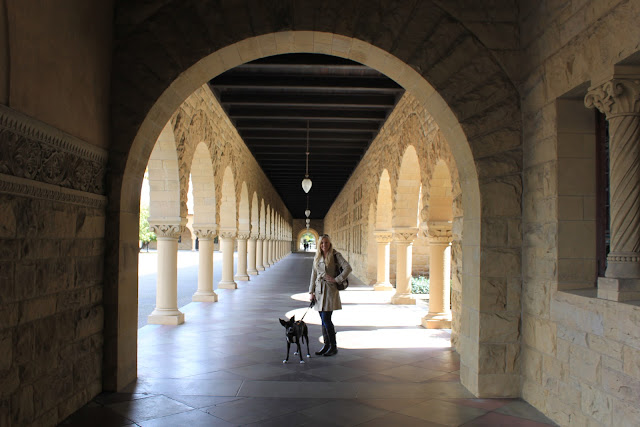 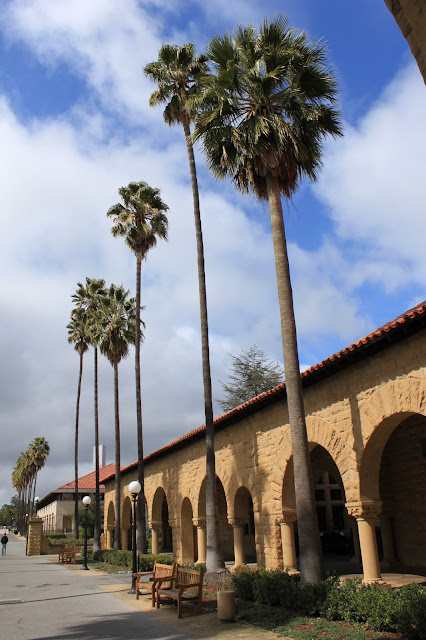 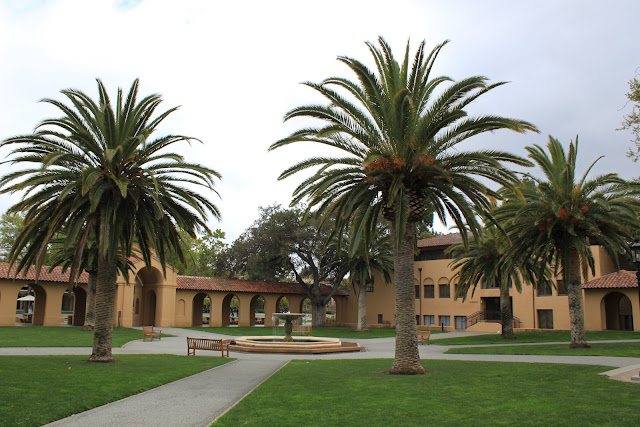 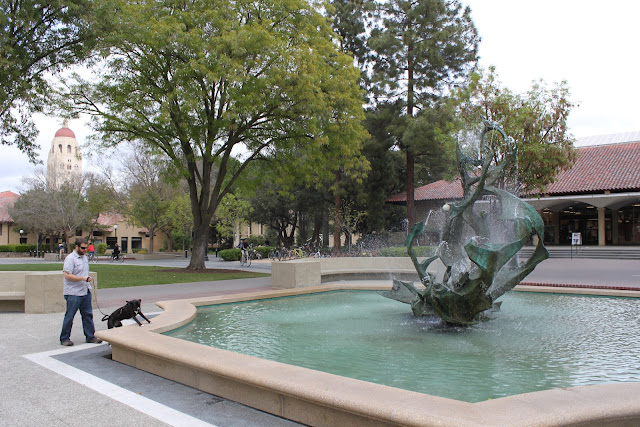 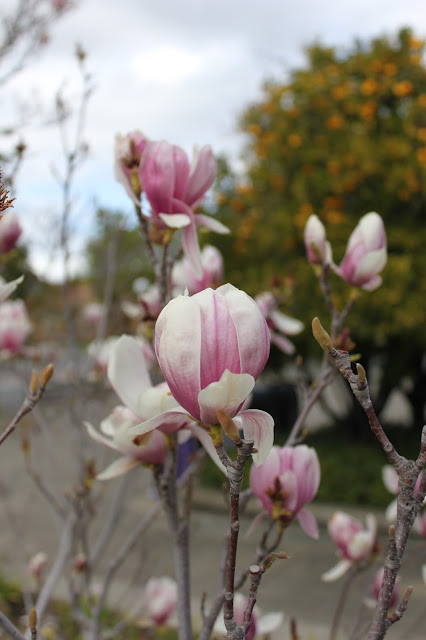 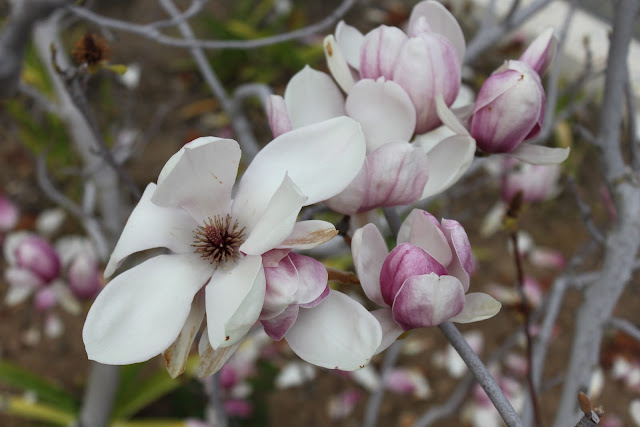 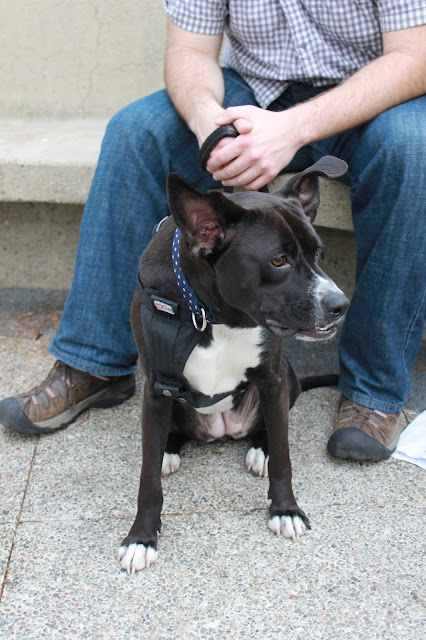 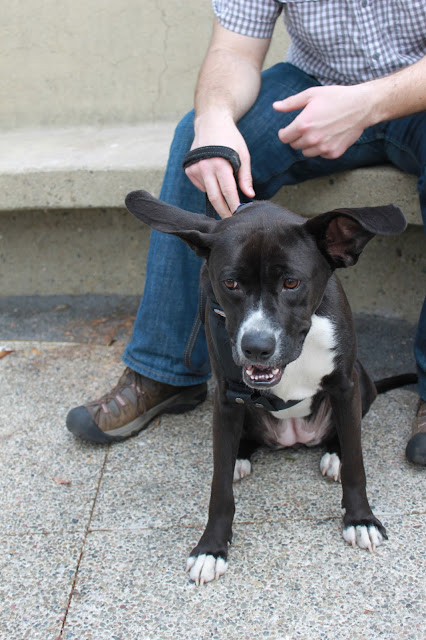 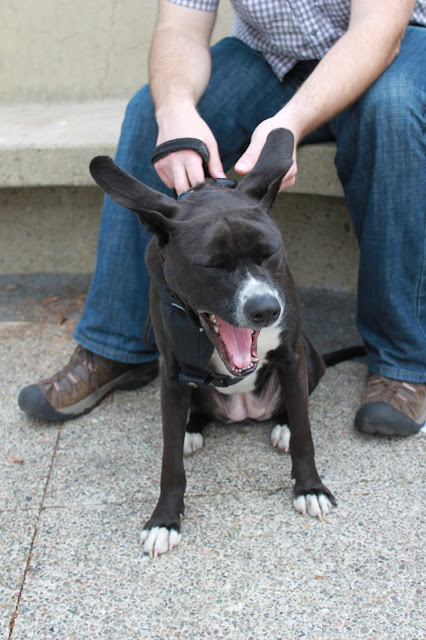 That’s the last of our San Fran photos for now…I’m looking forward to going back soon! Alright, I’ve got a full day of work ahead and then Cam and I have some fun plans this scheduled for this evening! Have a fabulous Monday everyone! Xoxo