Happy Sunday everyone! I don’t usually post on the weekends, but I thought I’d pop in to say hello since I haven’t had much time to post in the past few days.

First of all, I want to thank you so much for all your sweet comments on our anniversary post! We had a great day celebrating, and I’ll be sharing more later this week!

Also, I sincerely hope that no one took what I was trying to say the wrong way, and I was definitely not trying to fish for compliments by saying that I didn’t necessarily love my wedding photographer (even though I do appreciate all your kind words!). All I was trying to do was be honest and tell brides-to-be that even in the most “perfect-looking” weddings, there’s bound to be details that don’t go according to plan and that’s OK. Your wedding should be about celebrating the journey you and your husband are beginning and as long as you have fun and enjoy the day, that’s the important part so don’t sweat the small stuff. Just trying to keep it real here in blogland!

Today, I thought I’d take some time to share a few photos from our honeymoon! Since I didn’t start blogging until after we were married, I’ve never shared anything about the honeymoon on here before, so I thought now was the perfect time. It’s so hard to believe that three years ago today, Cameron and I were in Negril, Jamaica laying on the beach!

We left for our honeymoon right after our wedding…as in our wedding was Saturday night, and our flight left at like 6:30 am on Sunday morning. I definitely wouldn’t recommend doing that, but since we both only had limited time to take off of work, it’s what we did so we could have as much time on our honeymoon as possible. And it ended up working out fine, as our honeymoon was very relaxing!

I always knew I wanted to go somewhere beachy for our honeymoon, mainly because I wanted a vacation where we could just chill out after the wedding without feeling like we needed to be on the go sightseeing. I didn’t have a specific destination in mind though, so when it came time to plan we were open to suggestions. In the end, we ended up deciding on Jamaica mainly because it was closer to Michigan than some other destinations, it was fairly affordable, and Cam’s brother and sister-in-law had gone before and really enjoyed it. Per their recommendation, we ended up staying at the Hotel Samsara in Negril. The hotel was situated on the cliffs of Negril and had absolutely breathtaking views of the ocean. It was an all-inclusive, however, I think it was a little more basic than some of the other resorts I’ve seen. It was definitely a nice place to stay, but because it was a little smaller and lacking in some of the amenties of larger resorts like Sandals, there weren’t very many other honeymooners and it wasn’t super focused around that. I think if we went back now, we’d probably stay somewhere different, but at the time it fit our budget and we had a great time staying there! 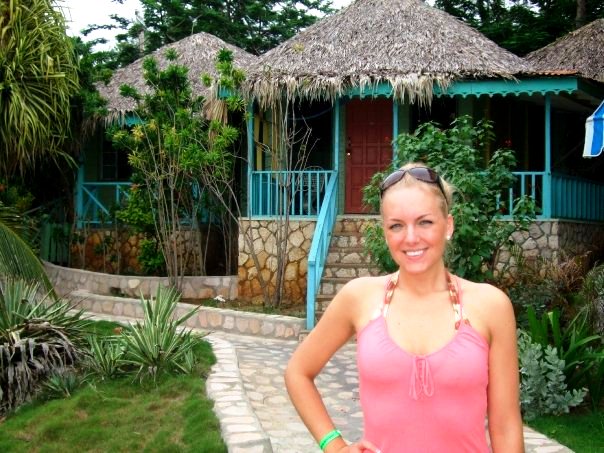 During our week in Jamaica, we did a few different excursions that were a lot of fun. There was a tour company that came to the resort with all different activities that you could sign up for, and although we enjoyed just relaxing at the hotel, it was nice to get out and try some new things. One of my favorite things was snorkeling! We took a boat out to an island off 7 Mile Beach, and then got to go out and swim with all the colorful fish…so much fun! 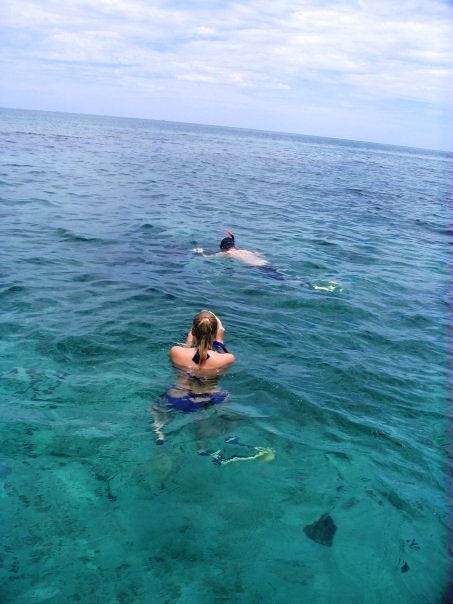 Another fun excursion we did was an all day trip to Jamaica’s South Coast. The day started out with a boat cruise down the river where we saw tons of crocodiles and our tour guide was even calling them right up to the boat! (The day was pretty overcast and there were some showers during the river cruise) The next stop was YS Falls, which was extremely lush and beautiful. After exploring in the waterfalls, we continued on to Appleton Estates where the world-famous Jamaican rum is made! I’m not a huge rum fan, but the grounds were beautiful and it was really interesting to learn about the history and see how rum is made.

We also did an excursion on the North Coast where we got to climb Dunn’s River Falls! It was a little crazy because the falls were pretty slippery, but it was definitely a neat experience. After the falls, we got to have lunch in another one of Jamaica’s main cities, Ocho Rios.

As far as meals, we ate most of them at our hotel and got to experience all different Jamaican dishes. Although, to be honest I was a litte sick of jerk chicken by the end of the week! In addition to the hotel, we ventured out to some other places in Negril including Margaritaville, Rick’s Cafe, and Xtabi, this nice restaurant on the cliffs where we had a delicious dinner on our last night!

Overall, Jamaica was a really interesting place to visit. It’s a very poor country and that’s something we saw that first hand while we were there. They definitely try to capitalize on the whole Bob Marley/Rasta thing, and it got a little annoying after awhile. As we had heard before going down there, people will definitely try to sell you drugs when you’re out in public/on a public beach, but we only had this happen a couple of times. However, despite it’s problems, Jamaica is also very beautiful and many of the people who we met were so warm and welcoming.

Due to the poverty in Jamaica, there are lots of stray animals…but I couldn’t resist petting them, even though they were probably covered in fleas…what can I say, I’m a sucker when it comes to dogs!

My favorite part about Jamaica? Laying out on the beach and jumping off the cliffs at our hotel…such a rush!

The sunsets were also amazing 🙂

I’m so glad we were able to have the experience of going to Jamaica, but at the same time, I’m not sure I would go back anytime in the near future. It’s a very beautiful country, but the whole reggae vibe kind of got old to me after a week, and so I think the next time we take a tropical vacation we’ll be more inclined to go somewhere like Hawaii or another place we haven’t visited yet. But overall, we had an amazing honeymoon and it was so wonderful to be able to celebrate our first week as husband and wife in such a relaxing place. It’s been so much fun to reminsce and I’m glad I could finally share these memories from our honeymoon! Xoxo