I’m doing a whole post about the food I ate in Michigan because:
1) It’s Friday
2) I love food
3) I ate a lot of it in Michigan
4) It gives me something to drool over now that I’m home and eating clean once again
5) It makes the extra weight I gained eating all this delicious food seem totally worth it

So, if you don’t like pictures of food, then you should probably just click that little X in the corner of the screen and come back later. But chances are if you like reading this blog/have anything with common with me, you probably like food/pictures of yummy food so you’re in luck today!

To me, food is so strongly tied to memories. The way the a whiff of a certain fragrance or hearing an old song can transport you back to the past, eating a particular food or going to a special restaurant has that same effect on me. Whenever I’m back in Michigan, there are places that are like old friends that I have to visit. But I also really like trying out new places too!

I thought it would just be easier to put all my food photos in one post, that way if you ever find yourself in the Mitten, you’ll know where to eat!
(I’ve included links to all the restaurants as well)

Angelo’s: This is one of the city’s most beloved breakfast spots, and to be completely honest, I think it’s overrated. It’s not bad by any means, it’s just not worth the 2+hour wait that they usually have on a football Saturday when we’re normally back in Ann Arbor. But since we were in town on a weekday morning during the summer, we had no problem getting right in. It’s got an old school dinner vibe, and the portions are huge! 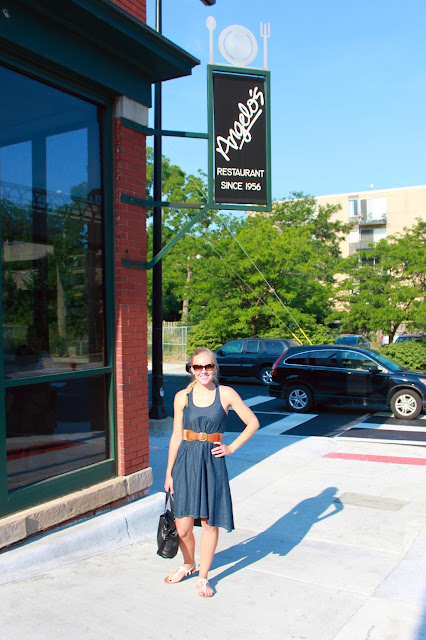 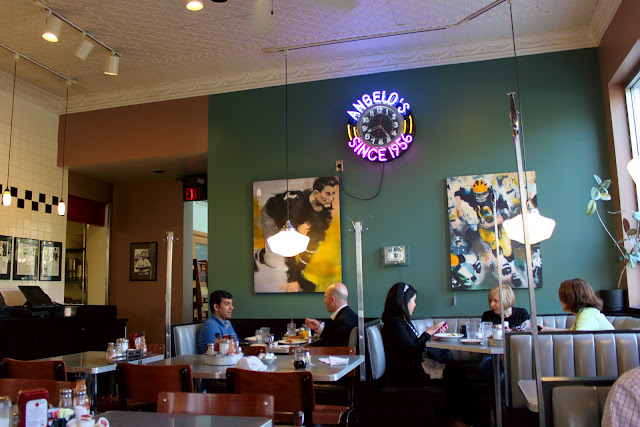 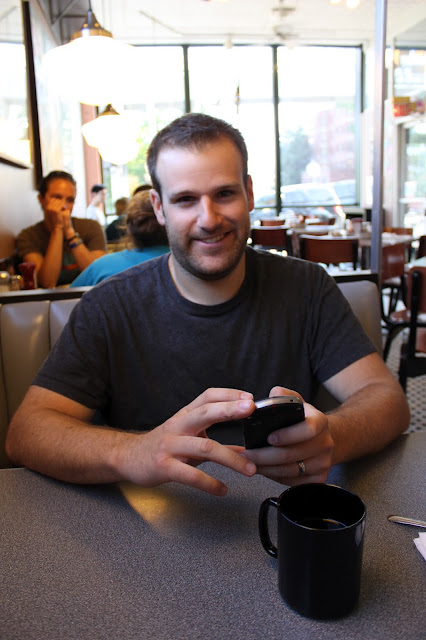 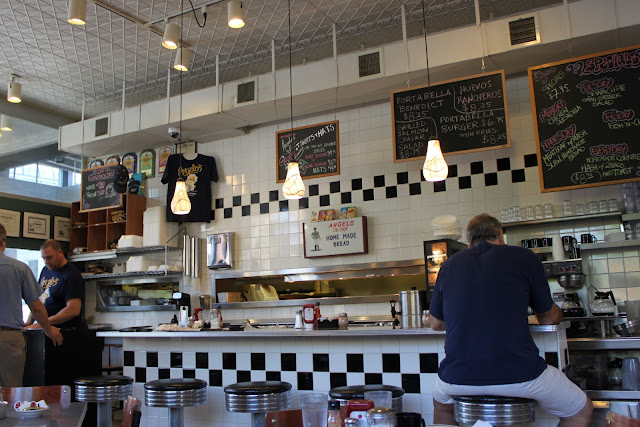 Cherry Republic: Northern Michigan is known for it’s cherries, and when we’d go camping up North, we’d always go to the Cherry Republic in Glen Arbor, MI. However, they recently opened up an outpost on Main St. in Ann Arbor and I think it’s just the greatest thing. They seriously have so many different types of foods involving cherries: dried cherries, cherry salsa, cherry jam, and about a million other things. Plus, the store has samples out all over the place so it’s a great place to stop if you’re ever in Ann Arbor and want to get a great Michigan souvenir. 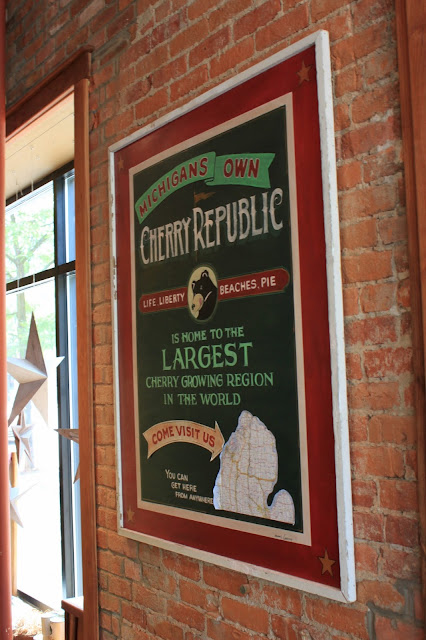 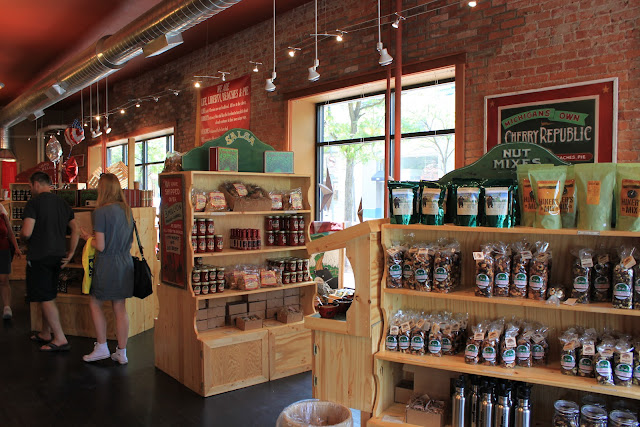 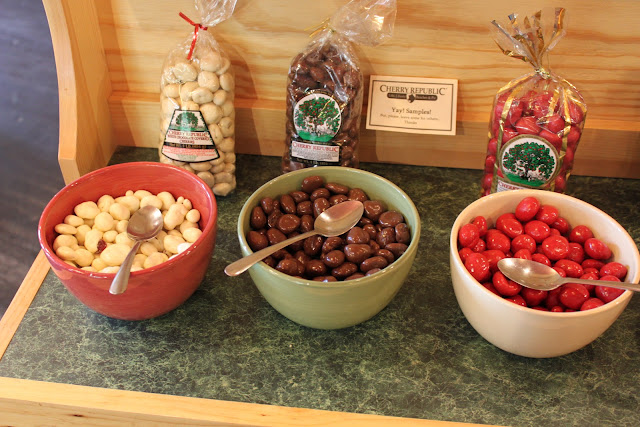 Zingerman’s: I’ve talked many times about how much I love Zingerman’s on this blog, but every time I go there I fall in love a little more. All their food is just so good. The people that work there are so passionate about the food and they only use really high-quality ingredients in everything they make. We had to wait in about a half hour line when we went for lunch, and it’s always busy no matter when you go. But if you find yourself in Ann Arbor, it’s definitely worth the wait!

(Note: If anyone saw “The Five Year Engagement”, Zingerman’s is the place where Jason Segal’s character gets a job and how they portray it in that movie is exactly how it is…people in Michigan love it! Also, a lot of “The Five Year Engagement” was shot in Ann Arbor on Michigan’s campus and in the acutal restaurants around town, so if you haven’t seen the movie yet definitely check it out when it comes out on DVD!) 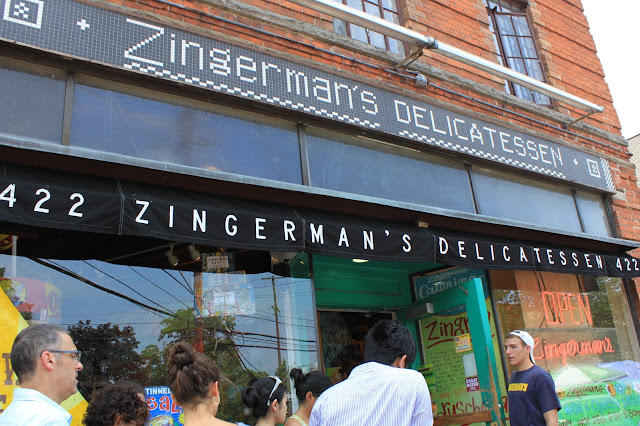 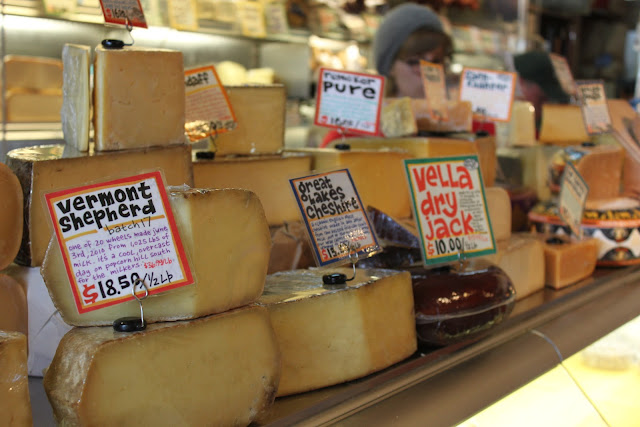 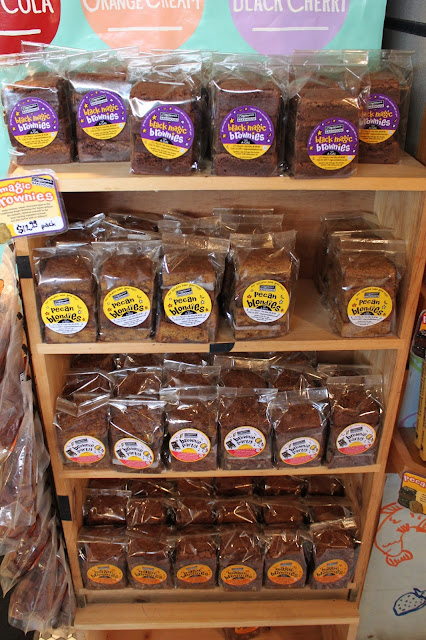 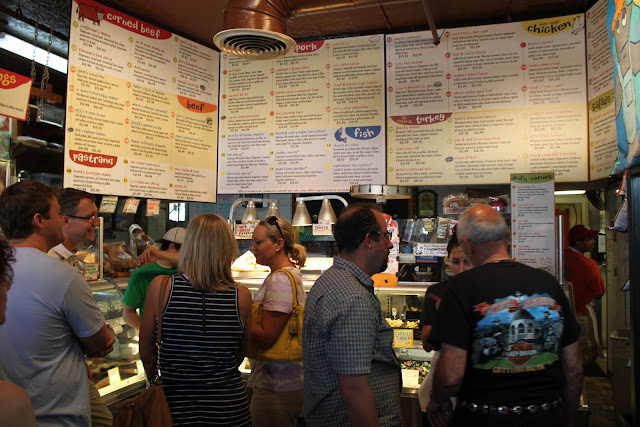 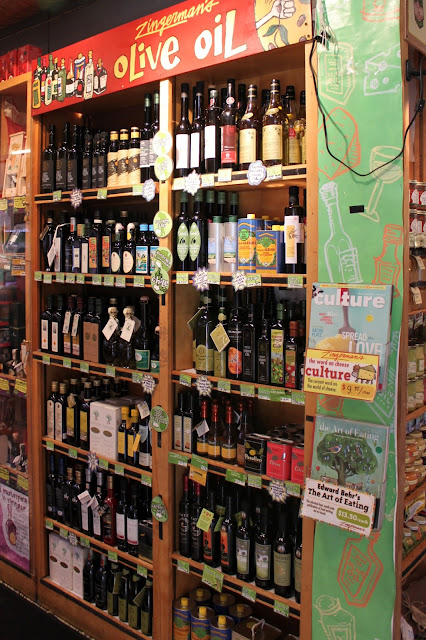 Cook’s Dairy Farm: This is an old-fashioned dairy farm located in Northern Oakland County where you can go to get amazing ice cream. It’s out in the middle of nowhere, but it makes for a fun little afternoon drive. Their ice cream is incredibly creamy and rich, just like ice cream should be. 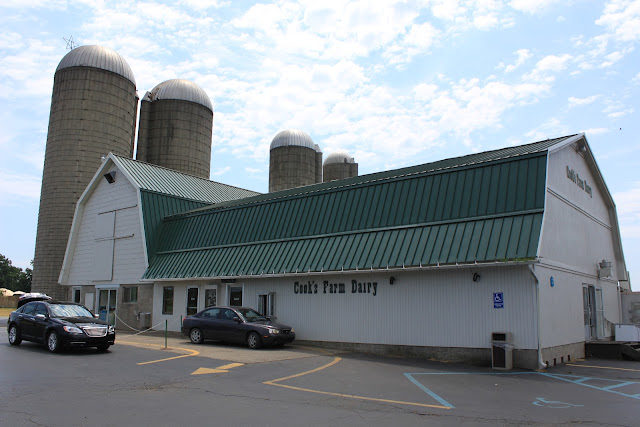 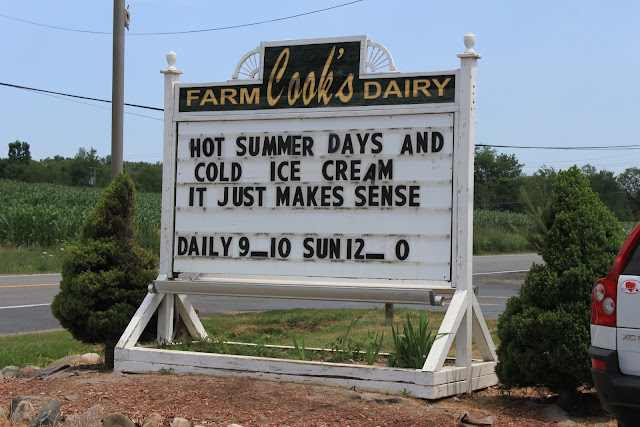 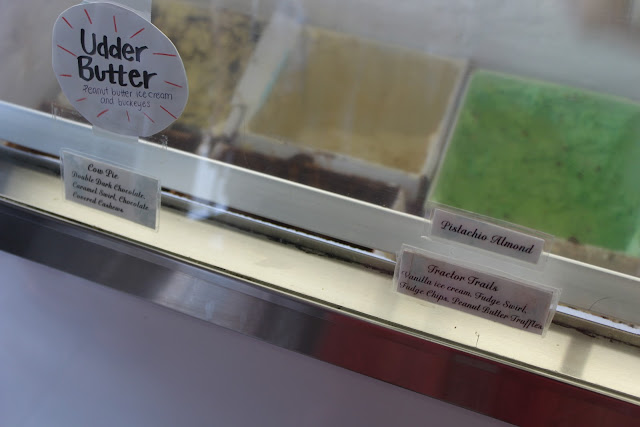 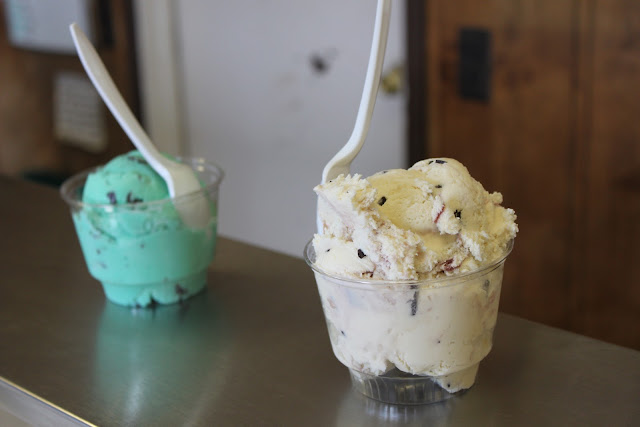 Rub BBQ: We tried out Rub with our friends Jeff, Laura, and Neil when we were in Detroit, and I was very pleasantly surprised. There’s another super trendy BBQ joint in Detroit called Slow’s (which is AMAZING) but it also had a 3 hour wait while we were in town, so we opted to go to Rub instead. It’s located right near Comerica Park where the Detroit Tigers play and it’s proximity to other touristy restaurants along with the somewhat “chain-like” atmosphere of the restaurant gave me pretty low expectations coming in. However, all the food was delicious! Cam and I shared a slab of ribs which were moist and flavorful, plus they give you 6 different sauces to put on your meat. I also got a side of mac & cheese that was awesome, and they have a really good selection of Michigan beers on tap. If you find yourself in Detroit for a sporting event, definitely eat here!

The Clarkston Union: This is a place I had been dying to try for awhile now after hearing my parents rave about it, as it’s one of their favorite places to eat. It’s an eclectic American-style restaurant that’s built inside of an old church in downtown Clarkston (so one town over from where I’m from) but it was recently featured on an episode of Diners, Drive-Ins, and Dives (a favorite show of mine!). The episode (check out the link here) featured Michigan native Kid Rock showing Guy Fieri some of his favorite places to eat and the Union was one of them. In the episode they showcased the Union’s incredible looking mac & cheese, so I was glad Cam and I were able to have lunch there with my parents while we were home. Even on a Tuesday for lunch, there was still a twenty-minute wait as the popularity of this place has definitely exploded thanks to Triple D. I got a full size order of mac & cheese with ham, and it definitely lived up to my expectations. It was so cheesy and I loved the crunchy topping. I really liked the overall vibe of this place and would highly suggest it! (and yes, I did eat mac & cheese twice in two days…see reason #5 for this post) 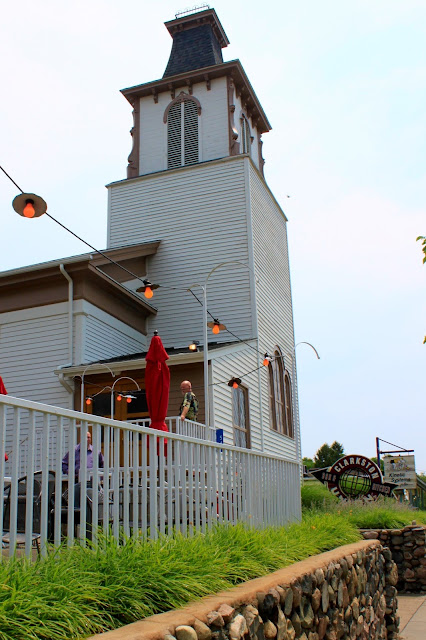 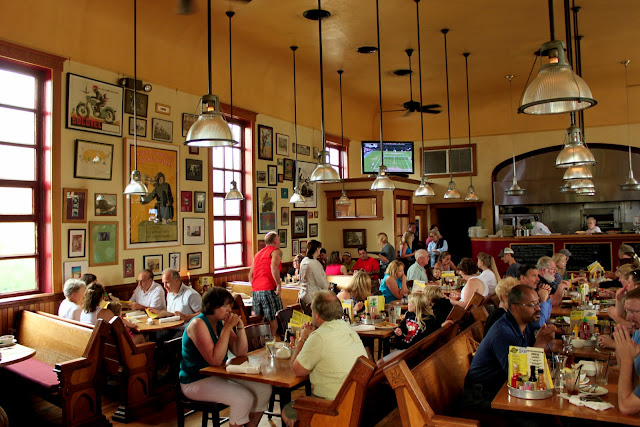 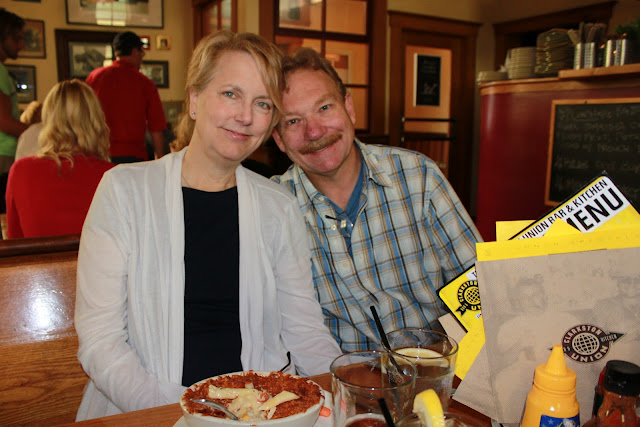 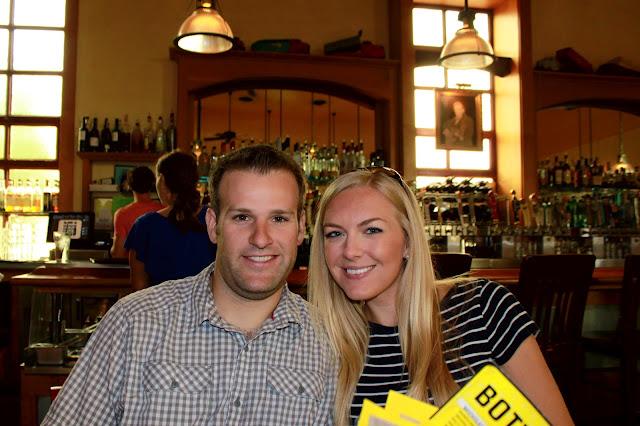 Next door to the Union in downtown Clarkston is a cute little gift/cupcake shop called the Union General. Housed in the parsonage of the church, this charming little store features really cute Anthropologie-esque cards and gifts along with delicious cupcakes…so basically my perfect store. 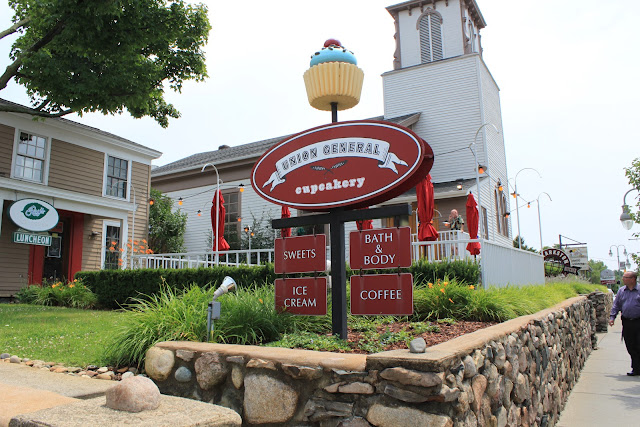 The Cupcake Station: Speaking of cupcakes, my all-time favorite cupcake place (and I’ve tried a lot of them across the country!) is The Cupcake Station. While I was home I was able to visit their location in downtown Birmingham, but they also have a location in Ann Arbor as well and I used to frequent it when we lived there! I love that they have mini-cupcakes as well as regular sized ones, and I picked up a few different kinds during my visit. My favorite? Cookies and cream! 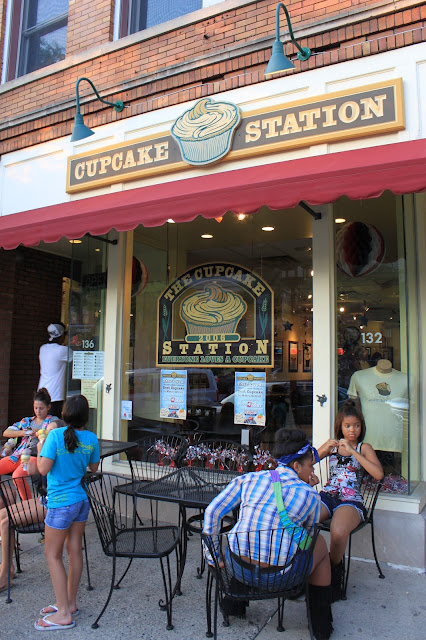 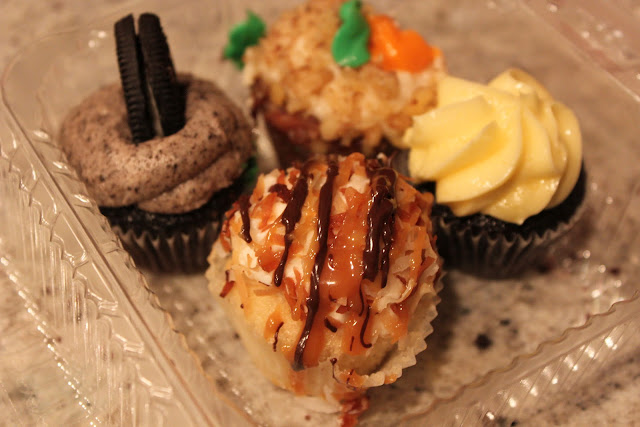 Sweet Earth: This was a new to me discovery while strolling around Birmingham, you know I love a good fro-yo place! I wouldn’t say it was the best frozen yogurt place I’d ever been too, but then again, I’m pretty critical because I’ve been to quite a few of them 😉 However, they had a decent choice of yogurt flavors and toppings, and overall I’d give it a thumbs up! 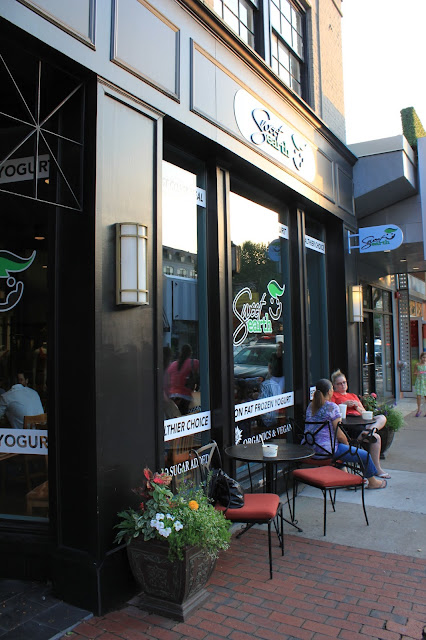 (My other Birmingham restaurant recommendations from this trip would be Toast and Luxe, but I didn’t happen to get any food photos while I was there!)

Sagebrush Cantina: This place is my hometown’s hangout. Located in downtown Lake Orion, it’s the place that you inevitably know you’ll run into someone you know, and there’s usually always a wait. But it tastes like home, and I think they have some of the best Mexican food around. The restaurant actually burned down when I was in high school (it was a really sad day, I remember everyone at the high school was crying, like people in my town LOVE this place) but they rebuilt it and now it’s even more popular than ever. My cousin Kayla works there, and it was a lot of fun to have dinner there with my family while I was home. Even though I’ve eaten at this place literally 100 times, I never get tired of it and always have to go and have a margarita while I’m in town. 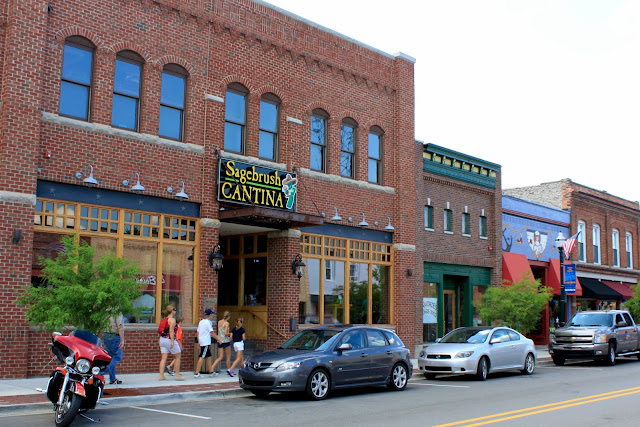 And if you happen to be in Lake Orion, definitely stop at Eva’s Dairy Cafe and get an ice cream cone. This is another one of my hometown places that I’ve been too a million times (I went twice while I was home!) but I just love their dipped cones and Reese’s Peanut Butter Cup Cyclones! 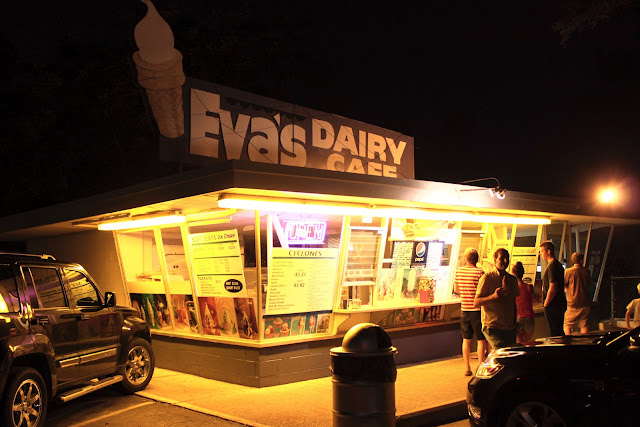 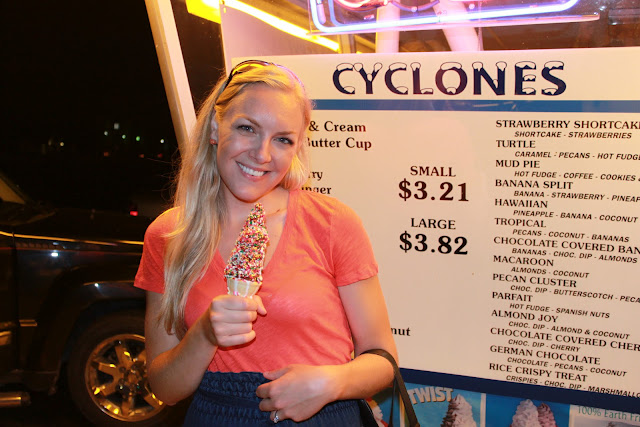 So there you have it, an extensive guide to the good eats in Michigan! Have a great weekend everyone! Xoxo

PS: In case you missed my posts from earlier this week about the non-eating parts of our trip you can check them out here and here!