This past weekend, I crossed something off my fall bucket list–I ran a 10K! 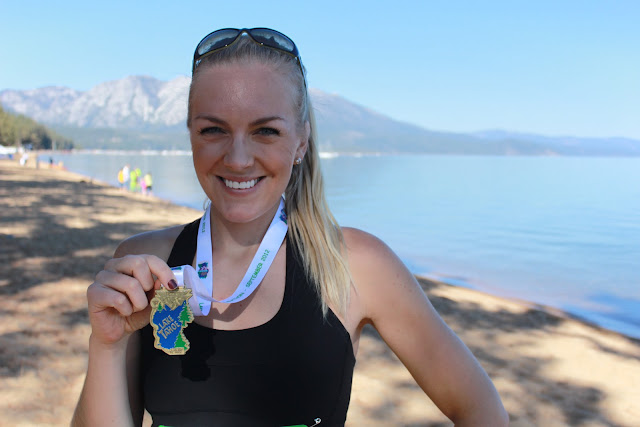 Earlier this summer, I found out my sister-in-law, Ashley, signed up for a half marathon here in Tahoe as part of the Lake Tahoe Marathon Weekend. It’s actually pretty cool because over the course of the weekend there are a bunch of different marathons, half marathons, and shorter races along with a 72 mile ultra marathon around the entire lake where the runners race through the entire night (so crazy). I figured I’d sign up for a race as well, and decided to register for the 10K since it was on the same day as Ashley’s half and finished in the same spot…and also because the website said the 10K was 99% downhill!
After I signed up, my plan was to start running again to get ready for it…but that never happened. Between going to our gym to take spin/strength classes and going to yoga, I just didn’t have the time or desire to run so I was definitely a little concerned about the race. However, I had been working out consistently all summer so I thought I’d just try my best. The 10K course started at Emerald Bay (one of the most scenic spots on the lake!) but because there is limited parking there, everyone running had to take a shuttle bus to the start. One thing I didn’t realize when I signed up for the race? My shuttle bus left at 6:30am on Sunday morning. Brutal. Thankfully, Cam got up to drive me to the shuttle and we got to see the gorgeous full moon over the lake since it was still dark outside on our drive. The shuttles to take us to the start were school buses and when Cam dropped me off I had such deja vu back to my cross country meets in high school. My parents would drop me off early on Saturday mornings and I’d board the bus with the team to ride to the meet. Even though I was never very good at cross country, I actually had a lot of fun being involved in it and running this 10K reminded me just how much I do enjoy participating in races.
For not having run all summer, the race itself went surprisingly well and I really enjoyed myself. I forgot how much I love the energy of a race day, there’s something about being there with all other runners that’s just infectious and really pumped me up! It was such a gorgeous morning and although it was a little chilly when the race started, it ended up being perfect running weather. As soon as that gun went off to start the race, I just felt on top of the world and really got in to a groove just running with everyone. Being able to run along such a scenic part of the lake was such a treat, even if running downhill on the road was a little tough on the knees! 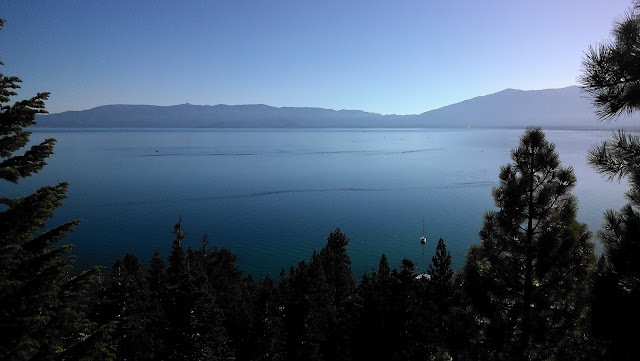 As I was running, I had my headphones plugged into my phone and was listening to Pandora. I was rocking out to Katy Perry and Kelly Clarkson when all of the sudden one of my favorite worship songs came on! It was super random, but it was just such a cool moment for because it was at a really beautiful point overlooking the lake. While I might not have been sitting on a church pew this particular Sunday morning, here I was out in nature and I could just feel God’s presence so strongly–it was awesome! I definitely understand why running is really a spiritual experience for some people because to just be outside and to have that opportunity to quiet your mind and and come before the Lord is really neat. I ended up listening to a few more worship songs during the rest of my run and I was so clearly reminded of just how much God is right here in Tahoe. I definitely feel closest to God when I’m out in nature for sure, but just running and staring at the beauty of creation all around me was just amazing. Watching the sun filter through the pines and listening to worship music was so uplifting and it was nice to just reflect over how much He has brought me
through these past few years. I would have never dreamed a few years ago that I’d be running a race around one of
the most beautiful lakes in the world, but it also gave me peace that if the Lord has brought me this far, surely I can make another 6.2 miles! 🙂 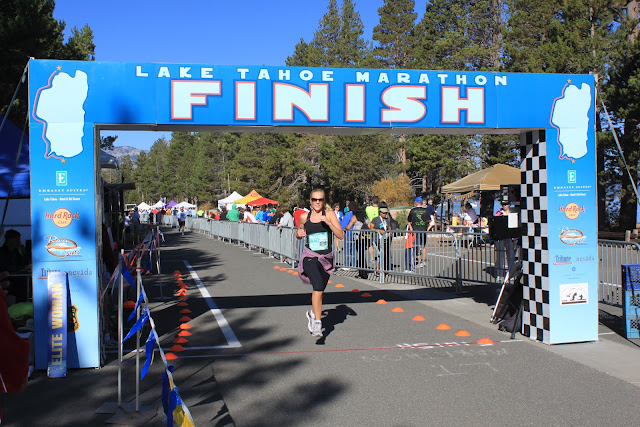 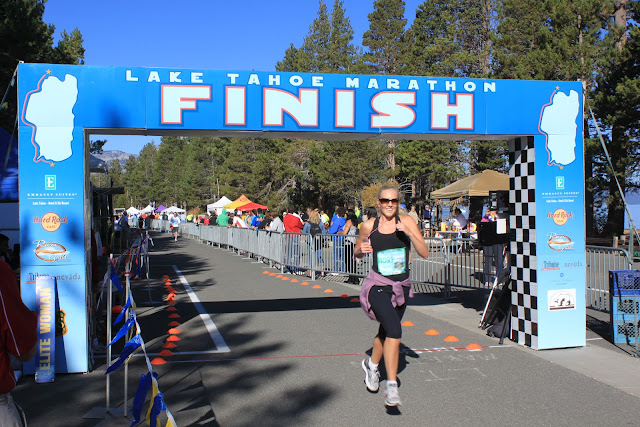 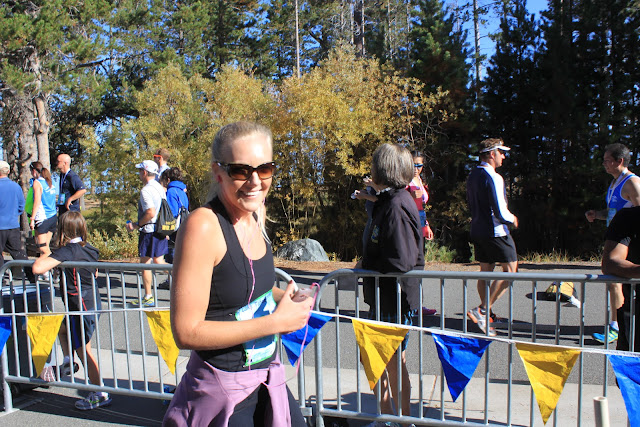 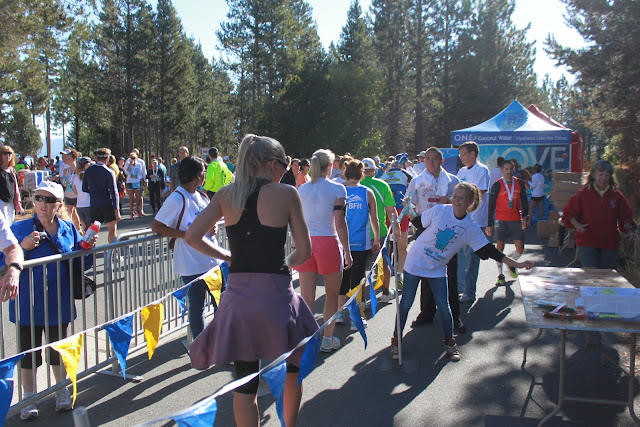 I finished the race feeling good and I was proud of myself that I actually ran the entire thing, something I did not think I was going to be able to do. (I did stop once at the 5K mark to take off my zip-up, but that was it and I didn’t walk any of the course!) I actually finished the race in just a minute or two over an hour (they didn’t chip time us so I’m not sure my exact time), and while that’s not super fast or anything, I think it’s pretty darn good for not having run at all prior to the race! (Plus, it’s also about the exact same time I finished my first 10K in last fall when I actually had been training!) Sweet Cameron, being the well-trained blogger husband he is, was there cheering me on at the finish line and was able to snap some pictures. All the runners got medals for finishing, and the race ended at beautiful Pope Beach. (Although for the record, the course was NOT 99% downhill…at all!) 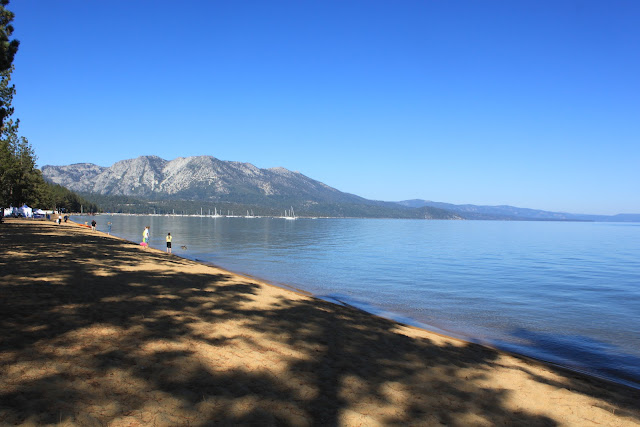 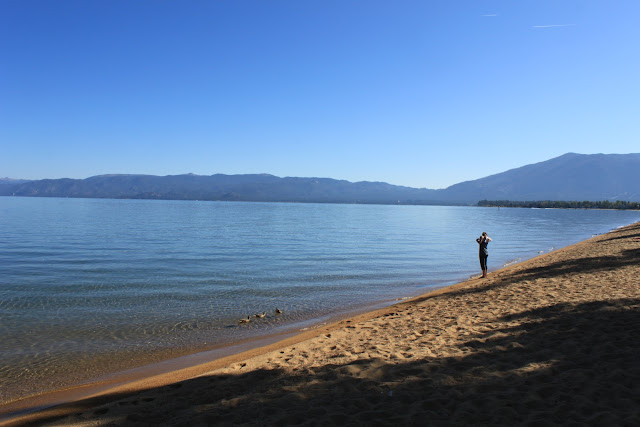 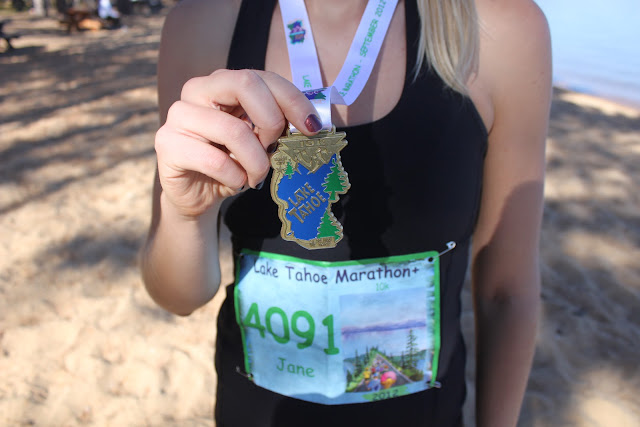 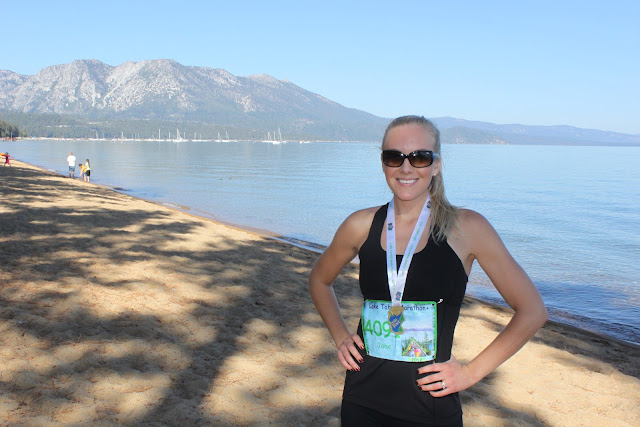 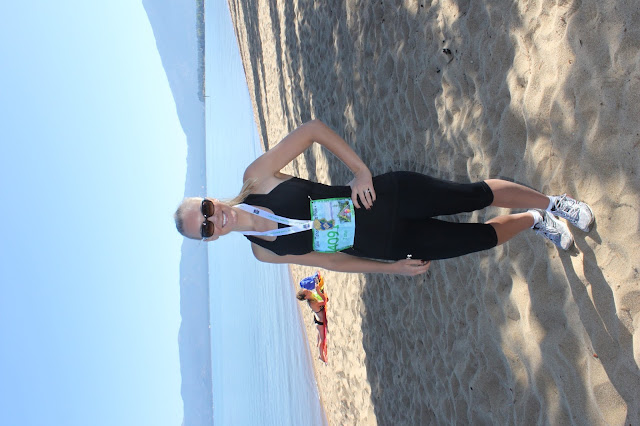 Of course, more photos were necessary…obviously. After I finished my race, we met up with Cam’s brother and Ashley’s parents to watch her finish her half marathon. She did an awesome job, although I definitely don’t envy how many miles she ran! 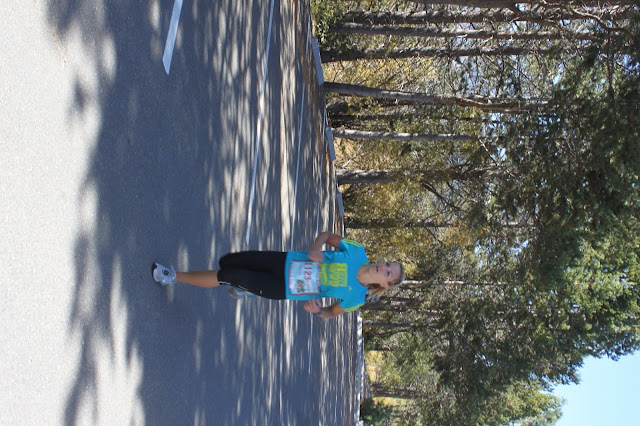 Overall, running the Lake Tahoe 10K was a wonderful experience and it was made that much better by the fact that we got to spend time with family as well. If you’re in the area and interested in participating next year, I’d highly recommend signing up for an event! (Here’s the link to the info for next year!)
Have a great day everyone! Xoxo