Happy Thursday everyone! I’m finally ready to start sharing some photos from our vacation to Turkey and Israel!
Our trip itself was about 13 days; we flew out of Portland on Sunday November 11th and then got back on Friday November 23rd. (And the reason we flew out of Portland? We didn’t want to leave Lola at a kennel for two weeks so we drove to Oregon so Cam’s parents could watch her for us!) Over the course of our two week trip, we took a ton of pictures. I was trying to decide how to break them up and share them, but I just figure I’ll share them little by little until I get through them all…so bear with me! (and I won’t be sharing them all in a row as I’ve got some fun holiday/giveaway posts planned for the next couple of weeks as well!) Also, I’m a super detailed person (people at work always joke that my emails I send are like short novels…ha!) so just sharing a couple photos isn’t really an option. I will be sharing a lot of them (though not nearly all of them that we took, that would be cray cray) in chronological order as that’s the only way my brain knows how to process things 🙂

So here we go!
We flew out of Portland (which is definitely my favorite US airport by the way!) on an afternoon flight direct to Amsterdam…aka the longest flight ever.
In Amsterdam, we took a connecting flight to Istanbul and arrived late afternoon. At the airport, you have to get purchase a visa before going through passport control, so we had to wait in those two lines. (Also, the visa costs $20/person US and you need to have that in cash. So if you ever find yourself flying to Turkey make sure you’ve got cash when you get off the plane!)
To get to our hotel from the airport, we ended up taking the public transportation (we heard that the cabs were a major rip-off/traffic was
crazy) which was super easy. We only had to make one transfer, and the stop we got off at was right near our hotel. We stayed at the Arden Park hotel, which was clean and modern while still being very reasonably priced. Istanbul is a very large city that’s actually split between Europe and Asia (connected by bridge), so there are lots of different areas that we didn’t get a chance to see. The nice thing about our hotel was that it was located in the Sultanahmet
district, also known as the Old City where most of the historic sights are located. It was a two-minute walk from the Hagia Sophia and the Blue Mosque, and very close to many of the other big attractions. While this was definitely a touristy area to stay, being we had a short time in the city (three days) it was really nice to be close to to a lot of the main sights that we wanted to see.
After checking into our hotel, we took a little time to figure out how to get our phones to be able to make calls using the Wifi. Suprisingly, basically all of the hotels/restaurants we went to in Istanbul (and Israel) had free wifi so we were able to use the internet on our phones (hence the overload of Instagram photos!). This allowed us to be able to make calls home for free using Google Voice paired with an app called Talkatone, and it worked out great.
After getting settled in our room/calling our families, it was time to eat!
Our hotel concierge offered to call us a shuttle to take us down to the Galata Bridge area where they said there were a lot of seafood restaurants. This area is very touristy (think Fisherman’s Wharf in San Francisco) and of course our shuttle driver took us to a specific restaurant on the bridge that was also very touristy, but luckily it ended up being really good! (I don’t remember the specific name of the restaurant, but I think all the restaurants in this area are kind of the same) We got to sit outside by the water, and even though it was a little chilly there were heaters to keep you warm (hence the red glow in these photos). Our waiter brought out a big cart with a bunch of different types of seafood and then you got to choose what you’d like. Then once you selected the type of fish you wanted, they brought out the actual fish they were going to serve you and weighed it right at your table to tell you what the cost would be. Definitely an interesting experience! 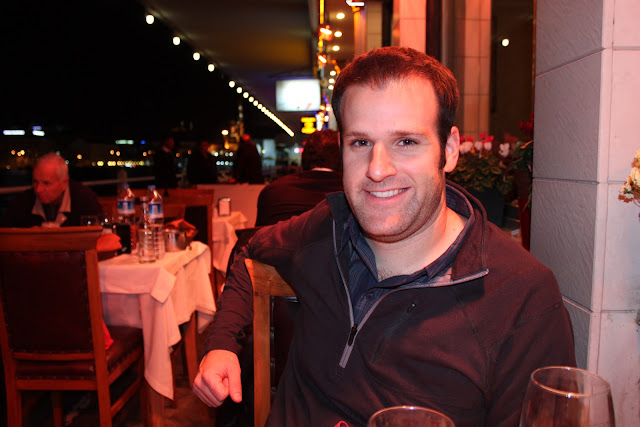 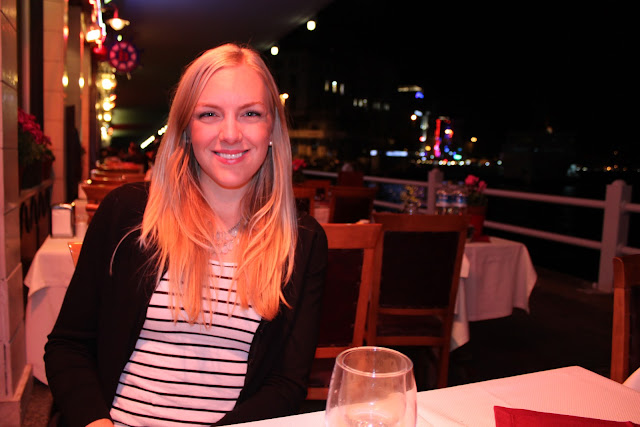 Tuesday morning, we at breakfast at our hotel…of course I had to take pics of the food. 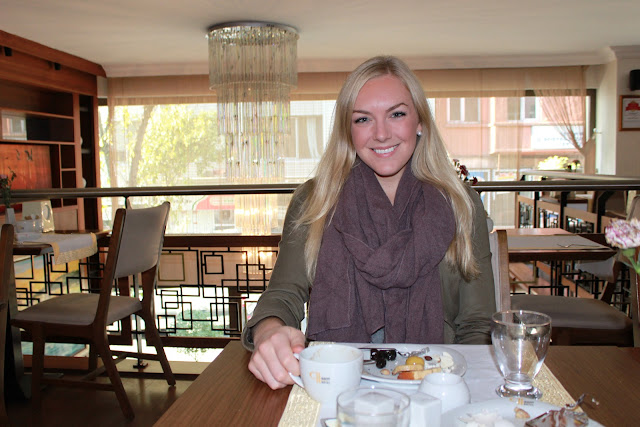 Luckily the weather while we were in Istanbul was great (high 50s-mid 60s) and we were able to walk pretty much everywhere. 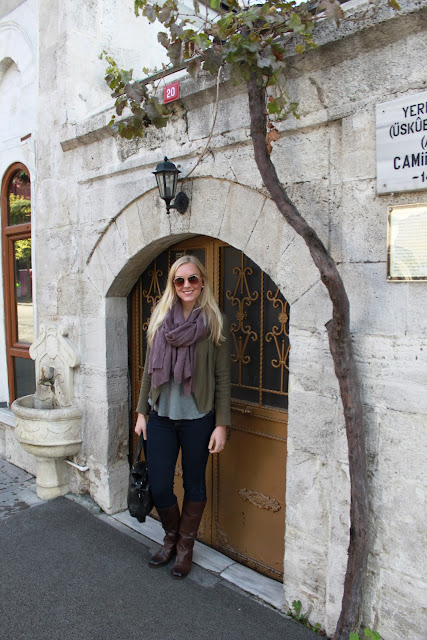 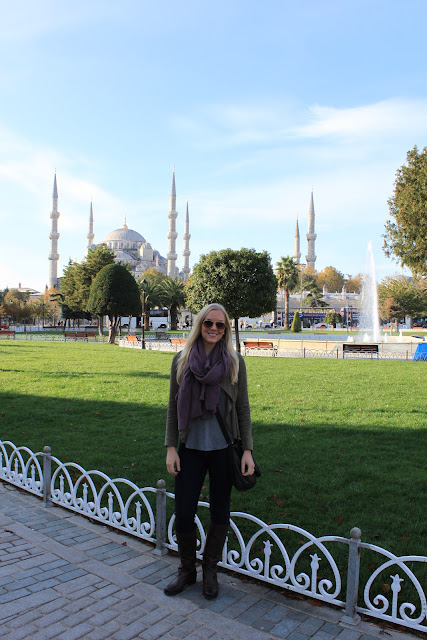 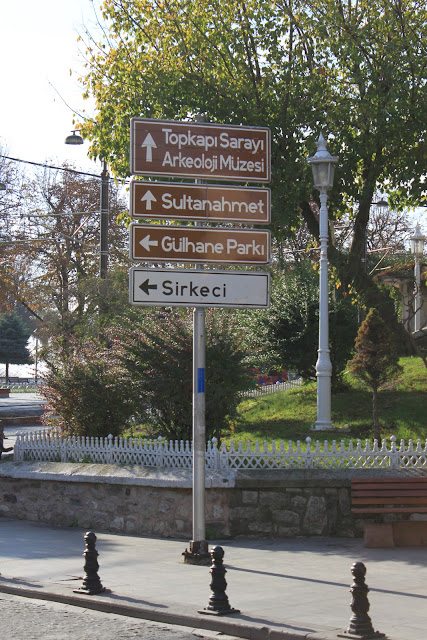 Our first sight we went to was the Basilica Cistern; you can actually go underneath the city and view the ancient cisterns from the Byzantine period which was really cool. I’d highly recommend it as a quick thing to see in Istanbul, but skip the audio tour because it was kind of a waste. 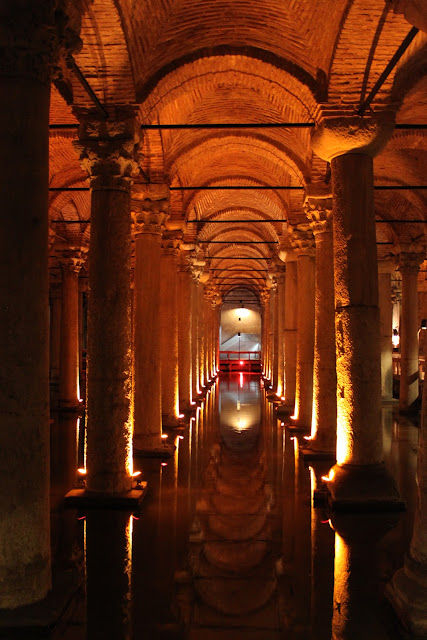 After the Basilica Cistern, we went to check out the Hagia Sophia. 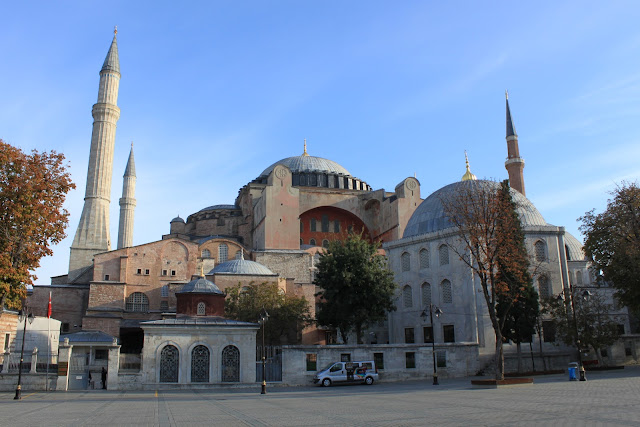 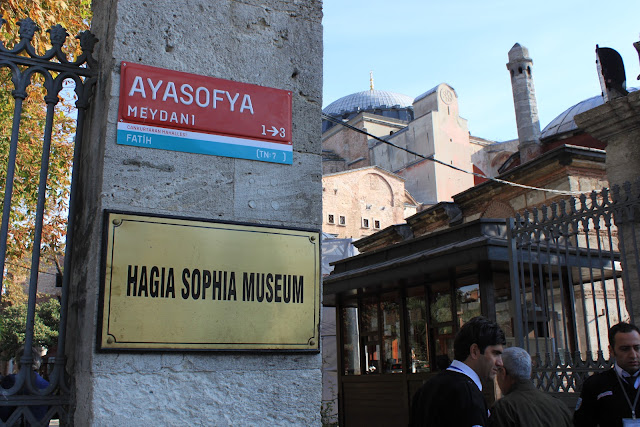 The Hagia Sophia was built as an Eastern Orthodox cathedral, then it was converted into a mosque, and then later turned into a museum, which is what it is today. It’s such a beautiful building with an interesting history–a must see if you are in Istanbul! 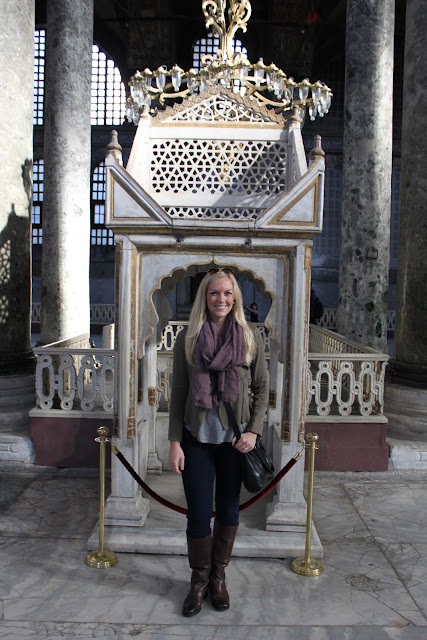 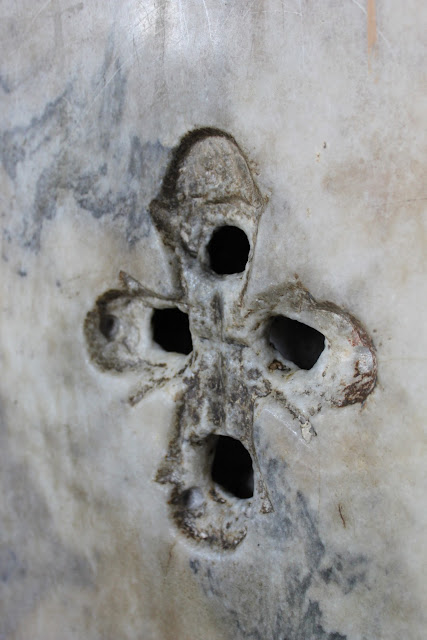 After the Hagia Sofia, we wandered over to the Hippodrome which is basically just a big square that was the center of social life back in Byzantine times when the city was called Constantinople. The neat thing to see was this giant obelisk that actually dates back to Egyptian times! 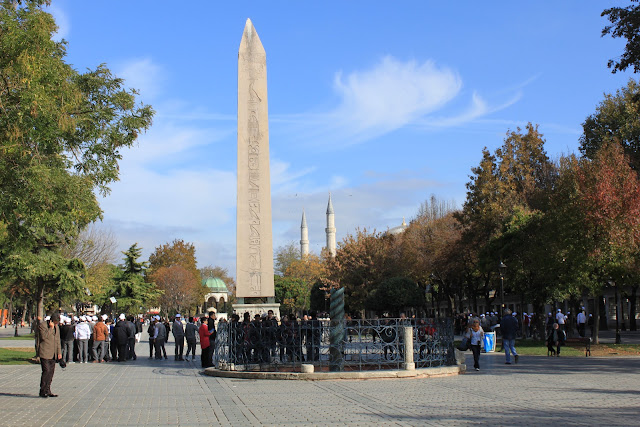 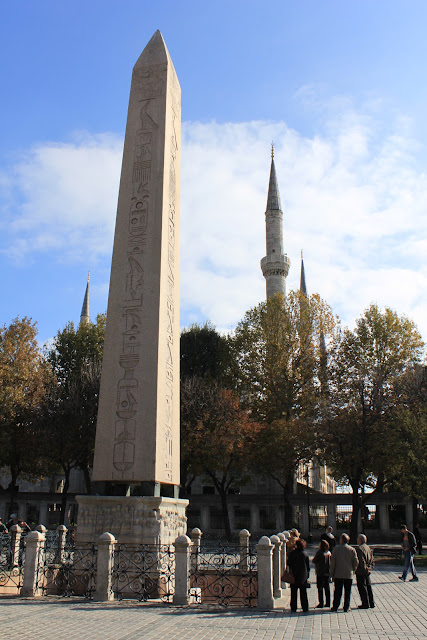 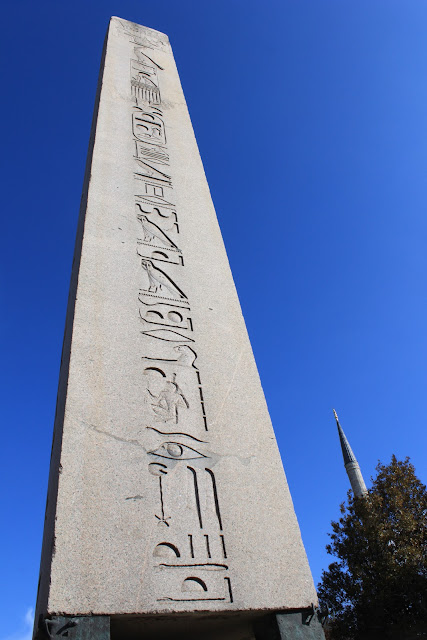 There were seriously cats running around everywhere throughout the city and for the most part they all seemed to be fairly clean, well fed, and very friendly. I am not a cat person and I even thought they were cute…ha! I said I wasn’t going to pet them though because I didn’t want to get fleas or something…I bent down to take a picture next to this orange cat and the little thing just jumped right in my lap! So after that, the no petting cats rule was out the window and I basically tried to make every cat I saw come sit in my lap. Ha.
Next stop for us on Tuesday was the Grand Bazaar! I knew this was one of the main things to see in Istanbul and it was definitely an experience. What surprised me is that many of the shops were very established and actually had stores inside the Grand Bazaar. People were selling a wide variety of items, although a lot of the different little shops had the same things–lamps, pottery, and rugs. It’s a little intense because as you walk buy all the shop owners are trying to entice you to come in their shops–“My friend, I make you good price!” 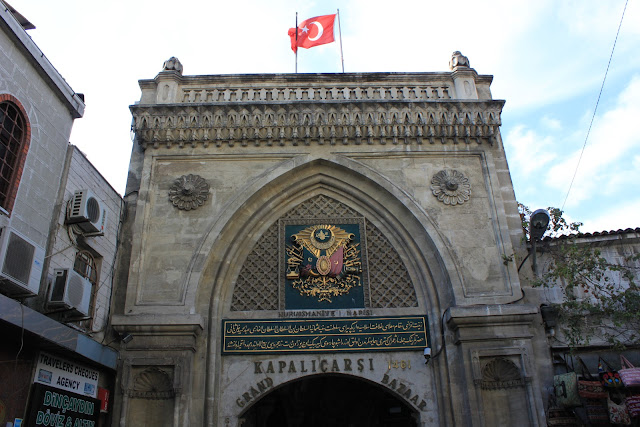 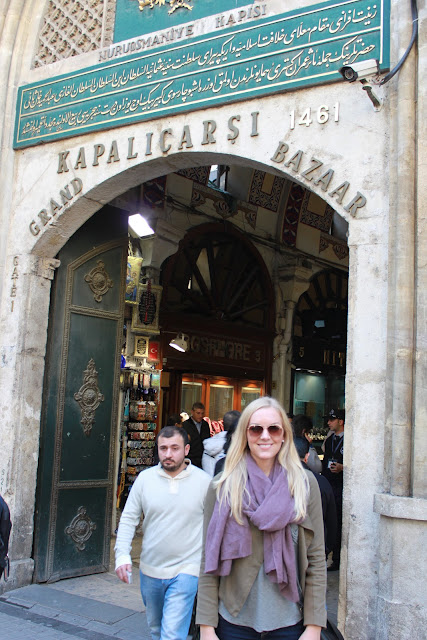 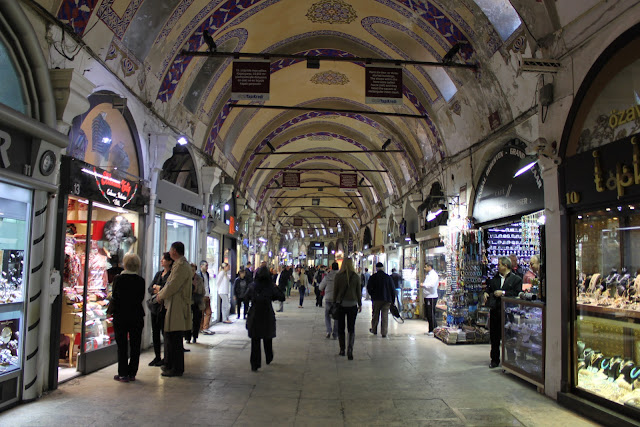 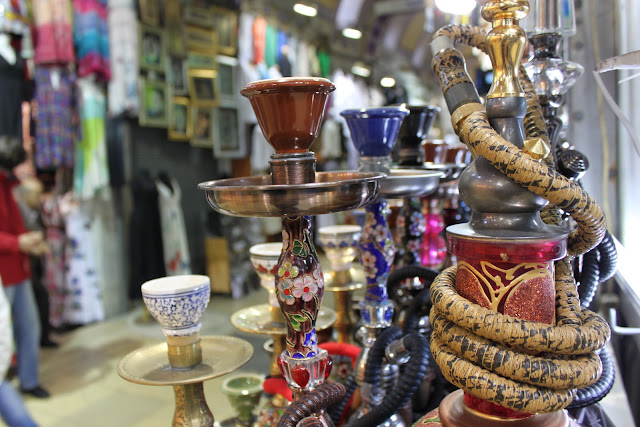 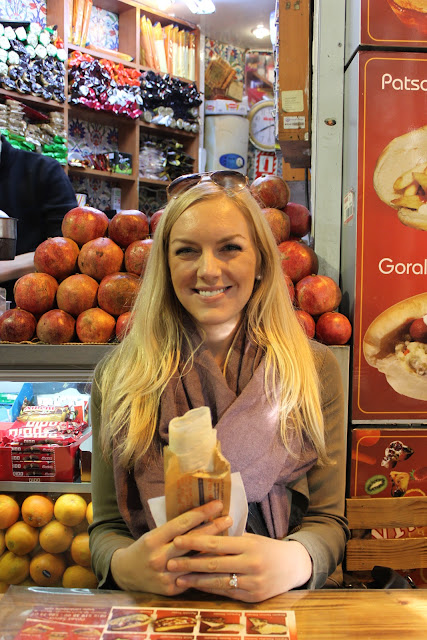 Istanbul is definitely a busy city with lots of people everywhere. The streets are actually quite hilly, yet another thing that reminded us of San Francisco! 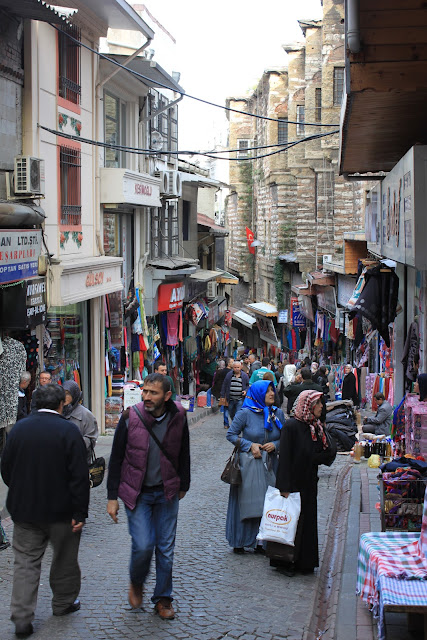 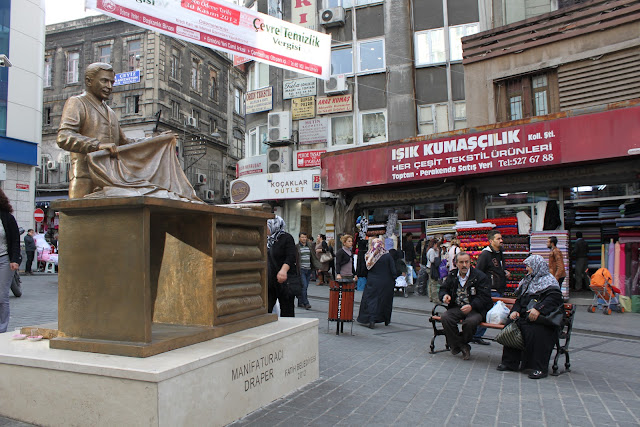 After the Grand Bazaar, we wandered over to the Spice Bazaar. This market had a lot of interesting foods and it was a lot of fun to walk around and take it all in! 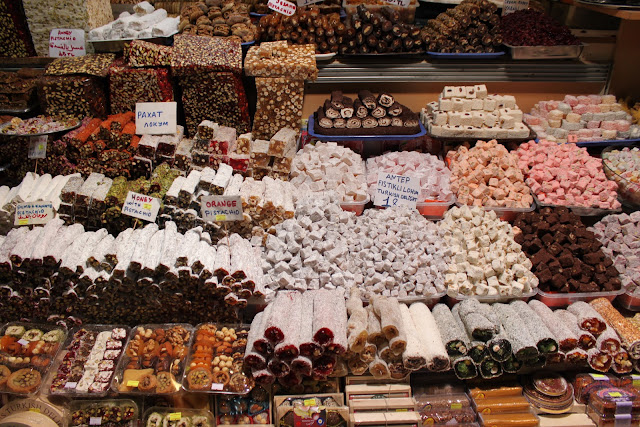 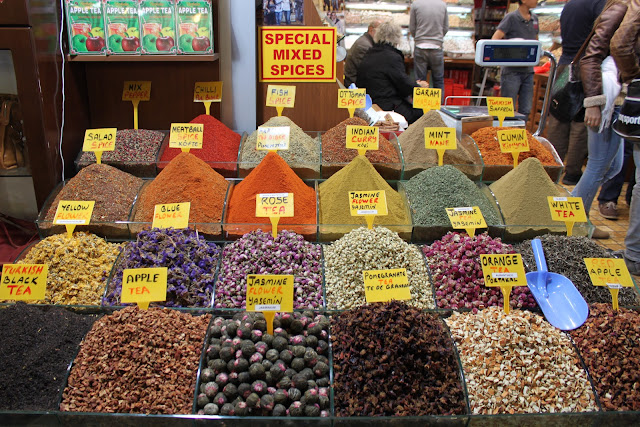 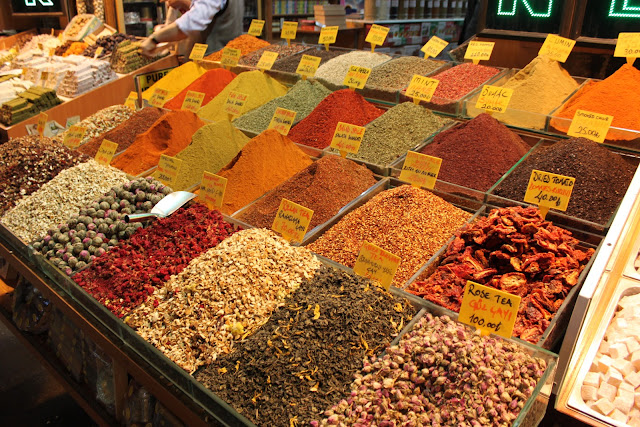 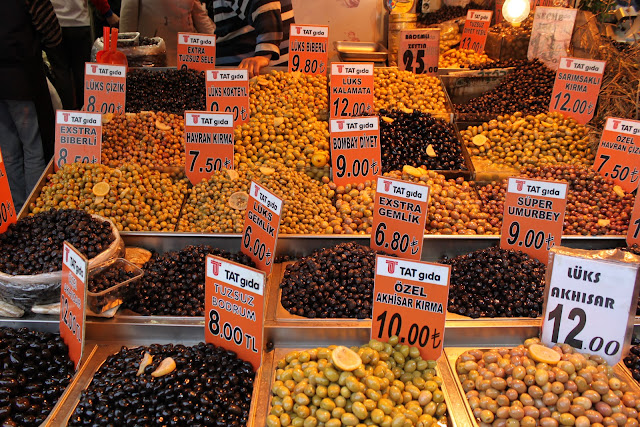 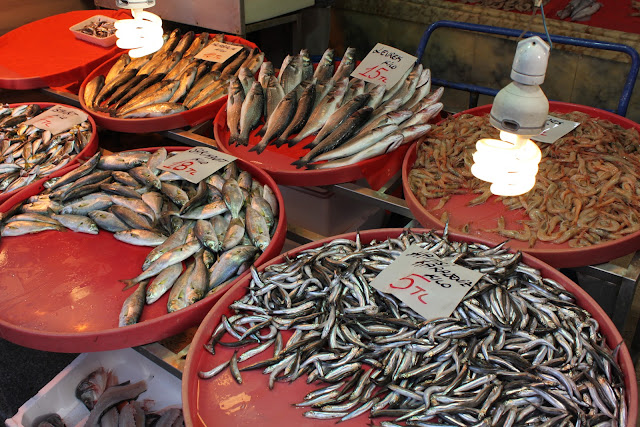 So we were able to knock out some of the main sights right away on our first day…but Istanbul still had a lot more to see! I’ll be sharing more pictures again soon, but I think this is enough for today! Have a fabulous afternoon everyone! Xoxo
PS: Be sure to enter the awesome giveaway I have going on from the adorable Etsy shop Blue Bird Bride! Someone will win a $20 giftcard that they can put towards a gorgeous necklace like this: Check out Tuesday’s post for the details!
I’ll announce the winner on Monday so hurry up and enter, you don’t want to miss out! 🙂