Happy Thursday everyone!
Today, I wanted share the first of our photos from our trip to Israel! I never intended to wait this long to post about our trip, but with the holidays (and traveling to both Oregon and Michigan!) things just got little busy! But now that  we’re in the new year, I plan on posting them little by little over the next few weeks.
We left for our trip to the Middle East back in the middle of November, and spent the first two and a half days in Istanbul, Turkey (which you can read more about here and here). On our last day in Istanbul, tensions in Gaza reached a breaking point and Israel decided to launch Operation Pillar of Defense, a military campaign to help protect its citizens, which started off by executing a leader of one of the terrorists groups. Cam and I were glued to the news in our hotel near the airport in Istanbul trying to figure out whether it made sense to continue on with our plans to go to Israel as flight was set to leave early the next morning and they were talking about a major war breaking out. After much prayer, we decided we’d go ahead and travel to Israel as we had planned, but we realized that we might have to alter our itinerary once we arrived.
Everything seemed fine when we got to the airport, and we were excited to finally be in Israel. However, security getting in to the country was fairly intense, but I think a lot of that probably had to do with the fact that we were coming from Turkey. They asked us lots of questions about the purpose of our visit to Israel/why we had gone to Turkey, and the whole thing was definitely a little nerve-wracking! Luckily, Cam had all our hotel information and the itinerary for our whole trip printed out to show security and we ended up getting through with out and issues.
My first impression of Israel was how different it was to see everything written in a language that had non-English characters! Most of the signs we say in the airport were written in Hebrew, then Arabic, and then English, and that was true of the road signs as well…but a lot of things over the course of our trip to Israel were just written in Hebrew…definitely took a little getting used to!
In our cab from the airport to Tel Aviv, the driver was listening to updates about the conflict on the radio. It was all in Hebrew but we could pick out a few words here and there, and the overall tone sounded pretty tense. I think Cam and I were both a little nervous about everything as we knew a full out war breaking out in Israel during our visit could be a possibility. Also, Hamas was firing long range rockets towards Tel-Aviv (not ideal for a vacation), but at this point most of the conflict was taking place in Gaza, which is located further south. All we could do at this point was pray and hope for the best!
However, after the cab driver dropped us off at our hotel in downtown Tel Aviv, our cares were quickly forgotten thanks to the gorgeous day! Blue sky, the weather was nice and warm (almost 80 degrees!), and the bright blue Mediterranean Sea stretched out in front of us–it couldn’t have been more picture perfect! Our hotel was right on the street that ran along the water and we had amazing views from our room. 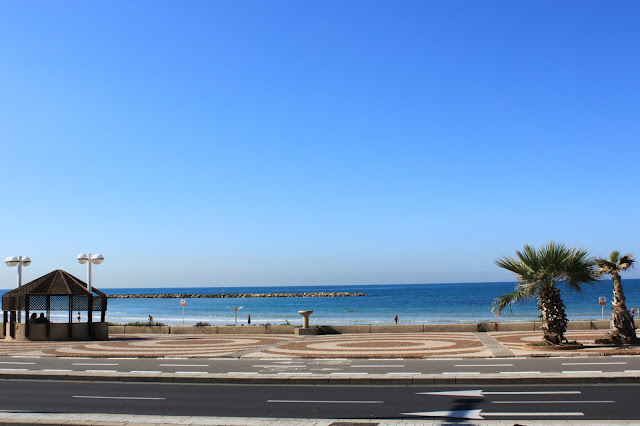 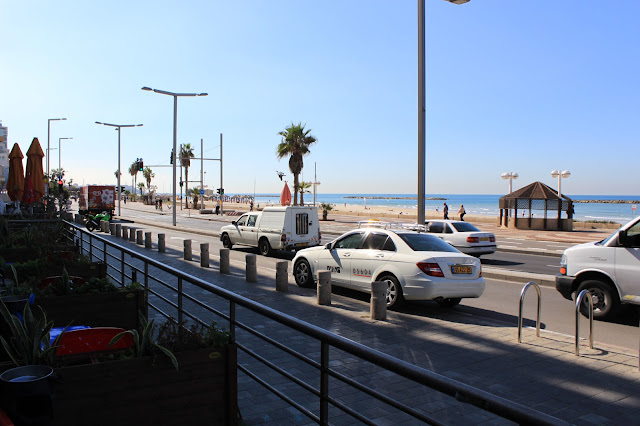 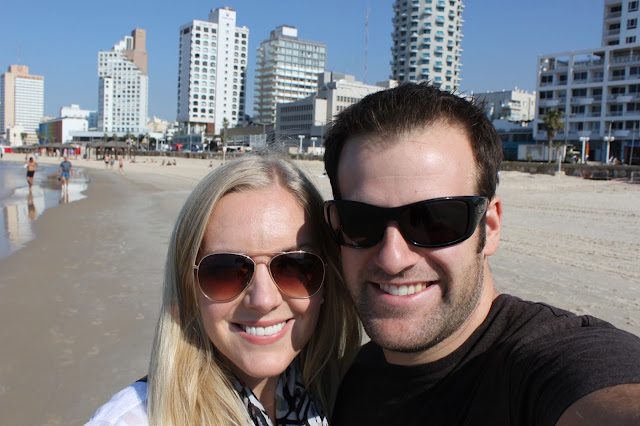 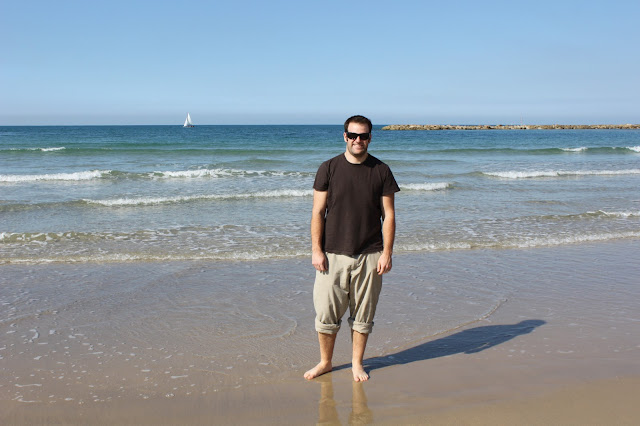 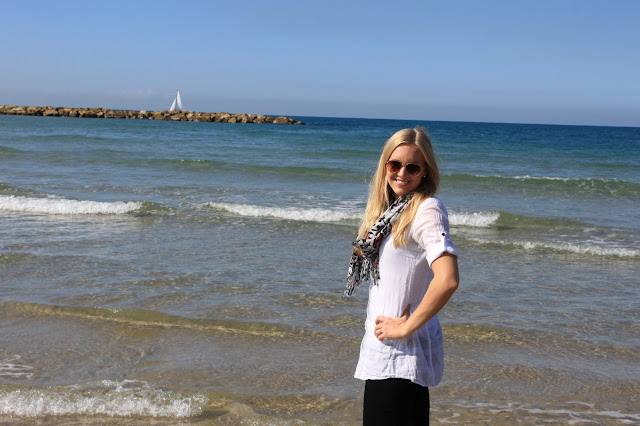 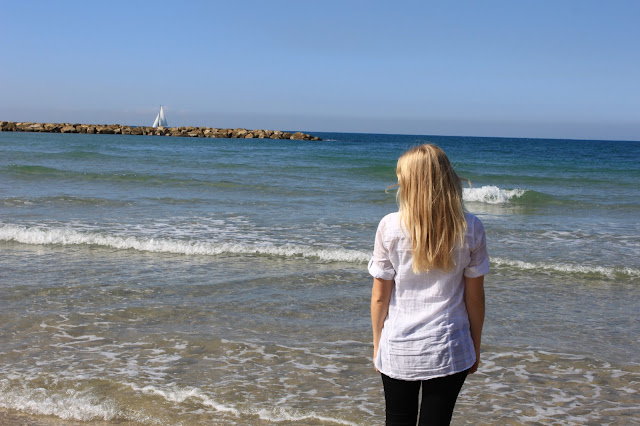 After walking on the beach for awhile, we headed over to the Carmel Market (or the Shuk Ha’Carmel as it’s called there I believe!) which is the busiest market in Tel Aviv. It was so much fun to walk around the lively and colorful environment, people watch, and sample the delicious food! 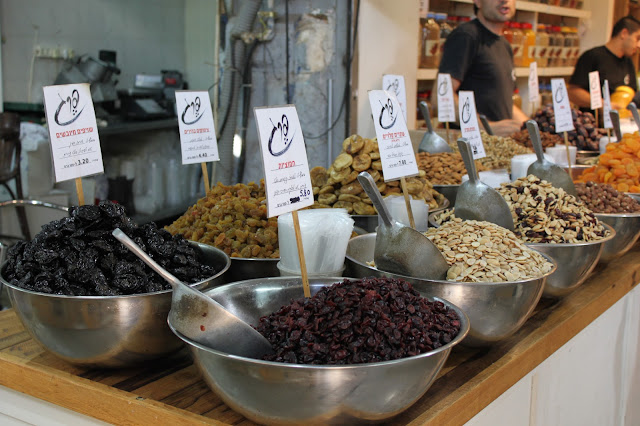 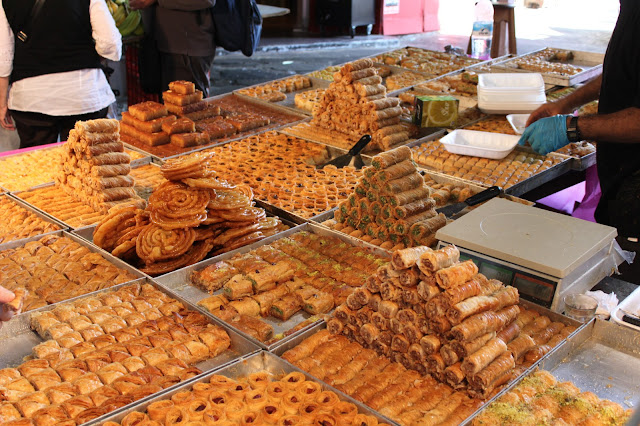 After the Carmel Market, we wandered down Dizengoff Street aka the main shopping drag in Tel Aviv. It was really weird because this part of town seemed so American, especially the way people were dressed. There were tons of young people out walking around, and I totally felt like I could be on a street in New York City.
The next morning, we had breakfast al fresco at the restaurant near our hotel. We had bread, fresh juice, eggs, and salad–such a nice way to start the day! 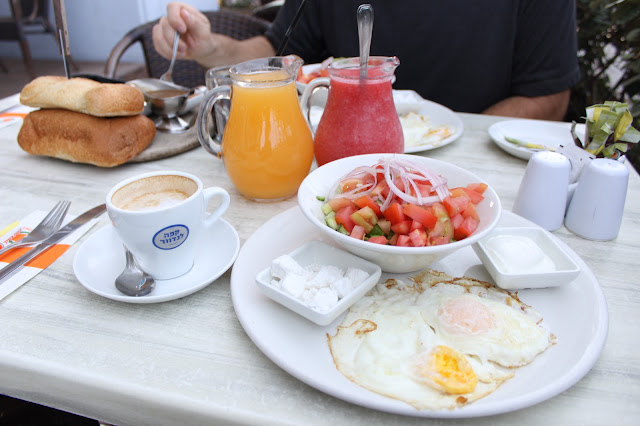 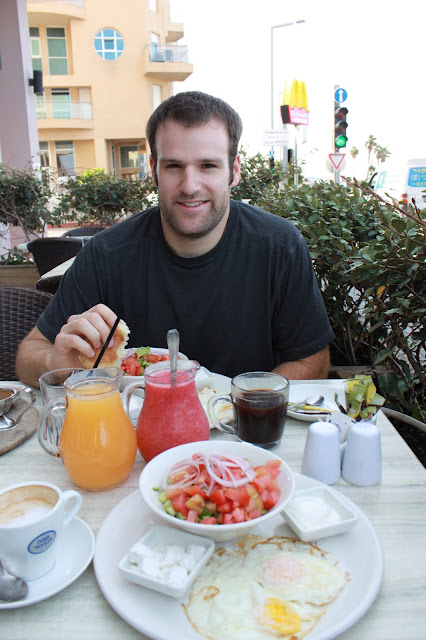 Thankfully, we were totally fine during our time in Tel Aviv (and the entirety of our trip to Israel) despite the conflict. We didn’t hear any sirens go off, we never saw any rockets, and never had to take cover in any sort of bomb shelter. (I’m pretty sure that the bomb sirens went off the night we left though, and we did hear from some other people that they saw rockets while they were in Tel Aviv that were taken down by the Iron Dome, Israel’s missile shield) Although I know it was very unsettling for our friends and family who were watching the constant news coverage of the escalating conflict in Israel and worried for our safety, it was also very interesting to be over there at such a time. People in Tel Aviv (and throughout all of Israel) were just going about their daily lives as if nothing was happening and everything seemed totally normal. So while round the clock news networks like CNN thrive on sensationalism and kept playing the same violent clips over and over of what was happening in Gaza, if we hadn’t been keeping up with the news, we probably wouldn’t have even known anything was going on.
Even though we were only in Tel Aviv for a day, we still had a really great time there! The way the city is set right up against the sea is beautiful, and while parts of the city seems very modern, it also has a beachy feel to it as well. It definitely seemed the most American of all the places we visited–we saw lots of people in workout gear running along the water, we saw Jeeps and stand-up paddleboards, and heard lots of American music. However, it also feels distinctly Israeli, with the Hebrew writing everywhere, the delicious food, and the bustling environment of the Carmel Market. I wish we could have spent more time in Tel Aviv to explore and relax by the water, but hopefully we’ll go back some day!
I’ll be sharing more photos from our trip soon, but that’s all for now! Xoxo