I know what you’re thinking, a pumpkin recipe…in March? 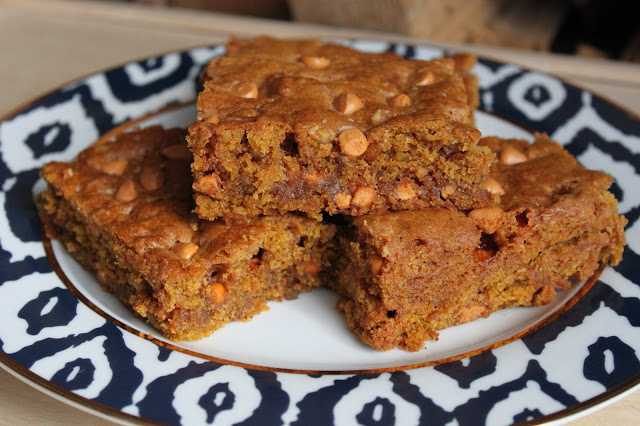 But hear me out.
These blondies are amazing and on a cold March day (because since I don’t live in the South/Texas like so many of my fellow bloggers it’s still freezing in March!) with a hot cup of coffee, they’re the perfect treat. The combination of pumpkin and butterscotch chips is so comforting, and I even broke one of my cardinal rules (no nuts in baked goods!) and added some chopped pecans into the mix. I personally like to underbake blondies (and cookies and brownies too) a little bit, as it helps to give them that delicious chewy texture once they cool. I took these blondies to a get-together with some friends recently and they were a huge hit! 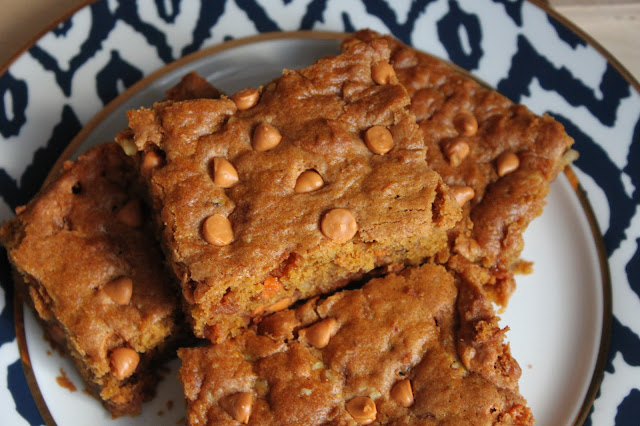 And besides, who said that you can only make pumpkin recipes in the fall?
Pumpkin Blondies
Recipe Source: Adapted from Annie’s Eats
Ingredients:
2 cups all-purpose flour
1 tbsp. pumpkin pie spice
1 tsp. baking soda
¾ tsp. salt
16 tbsp. unsalted butter, at room temperature
1¼ cups granulated sugar (or brown sugar)
1 large egg
2 tsp. vanilla extract
1 cup pumpkin puree
1 package butterscotch chips
½ cup chopped pecans
Directions:
Preheat the oven to 350° F.  Line a 9×13-inch baking dish with foil.
In a medium bowl, combine the flour, pumpkin pie spice, baking soda and
salt.
Stir together and set aside.
In the bowl of an electric
mixer fitted with the paddle attachment, beat together the butter and
sugar on medium-high speed until light and fluffy, about 2 minutes.
Beat in the egg and vanilla until well combined.  Mix in the pumpkin
puree.  With the mixer on low speed add the dry ingredients and mix just
until incorporated.  Fold in the butterscotch chips
(and nuts, if using) with a rubber spatula.
Spread the batter
evenly into the prepared pan.  Bake until the edges begin to pull away
from the sides of the pan and a toothpick inserted in the center comes
out with just a few crumbs, about 35-40 minutes.  Transfer the pan to a
wire rack and let cool completely before cutting.
To serve, lift
the cake from the pan using the foil and transfer to a cutting board.
Peel off the foil and using a sharp knife, cut into 24 squares. 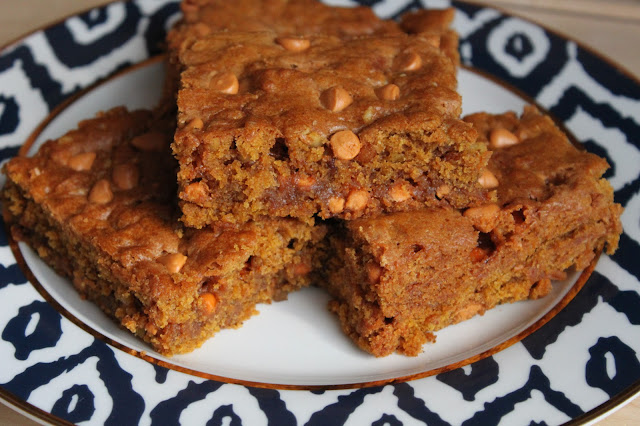 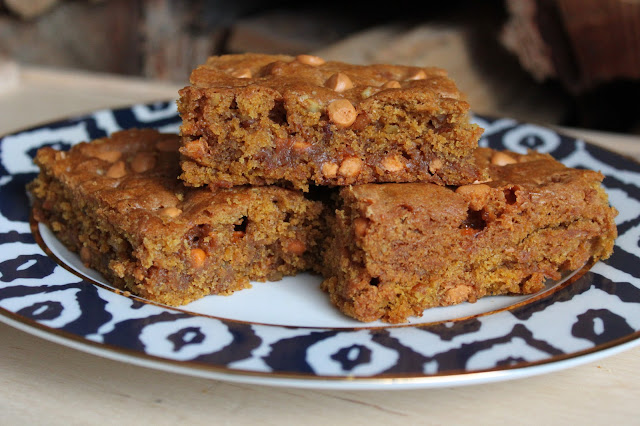