My husband and I have a some little routines for how things get done around the house. Every night before bed, I pack his lunch for work the next day; I make sure he has fruit, veggies, and a good serving of protein (usually leftovers from dinner the night before). In the mornings, he usually gets out of bed first while I lay in bed for a few minutes getting more sleep/browsing social media sites on my phone and goes downstairs to make us both breakfast. One big change for us in eating Paleo for over a year now is that we almost always have eggs/meat (usually good bacon from our butcher shop or organic chicken sausage) for breakfast. We both like it (plus coming downstairs each morning to breakfast made by my hubby is pretty nice), it’s very filling, and we don’t really ever get tired of it. 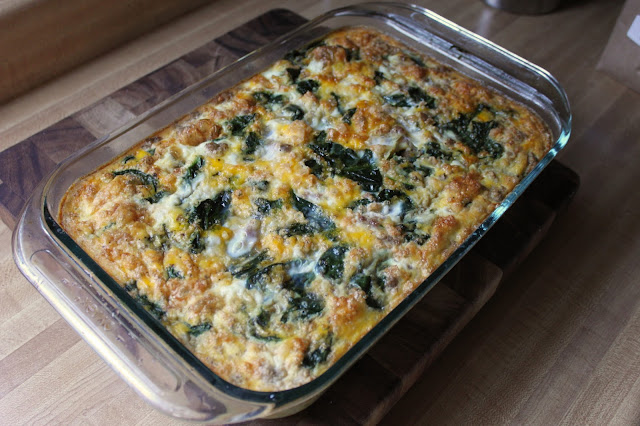 However, it is nice to change things up every now and then! The other day Cameron randomly mentioned he wanted to make a breakfast casserole, and then a few days ago he just decided to throw one together…and it came out awesome! It’s been great to have a little variety this week as far as breakfast goes, plus it’s super easy to just cut off a slice of casserole in the morning and warm it up. I did not have anything to do with making this dish as Cameron did it all (I promised him I’d give him credit on le blog) but I thought I’d share the basic recipe he used as it’s a great way to have a hearty breakfast dish prepared that will easily last two people the whole week! 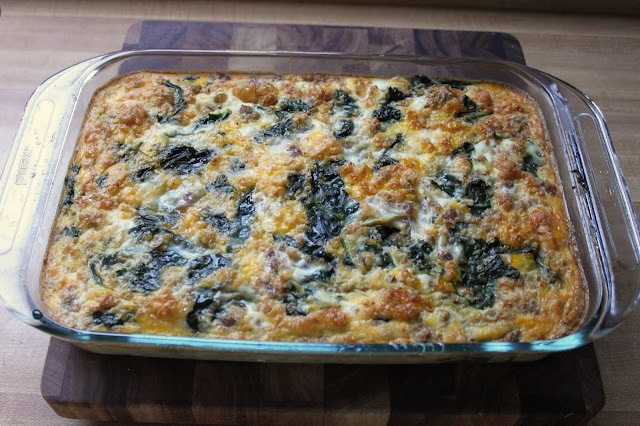 Ingredients
2 lbs of ground pork
(you could substitute grassfed beef or really any other type of protein that you like!)
2 onions, chopped
4 cups of spinach (a few large handfuls)
24 eggs
Coconut Oil
Salt and Pepper
Directions
1. Preheat oven to 350 degrees. Saute the chopped onions in coconut oil over medium heat until translucent, and then remove from pan and place in a 9×13 rectangular baking dish (Cameron didn’t grease our glass 9×13 and we’ve had no problems getting the casserole out, but feel free to grease if you like!)
2. Season the ground pork with salt and pepper and then brown in the same pan you used for the onions over medium-high heat until the meat is no longer pink (it doesn’t necessarily have to be browned all the way through since it’s going in the oven) and then remove from the pan and add to the baking dish with the onions
3. Add a little additional coconut oil to the pan and add your spinach. Saute over medium heat until spinach is wilted and then add to the baking dish with the onions and pork. Use a spoon to mix onions, pork, and spinach in the baking dish until combined.
4. Take a large mixing bowl and whisk together 24 eggs (yes, I realize that’s a lot!) until well mixed. Season eggs with salt and pepper and then pour into the baking dish over the onions/pork/spinach mixture.
5. Bake casserole at 350 for 40 minutes or until the eggs are set (it’s ok if it’s a little wobbly in the middle as the casserole will continue to set as it cools)
6. Slice and serve! (Or put in the fridge and eat the leftovers throughout the week!) 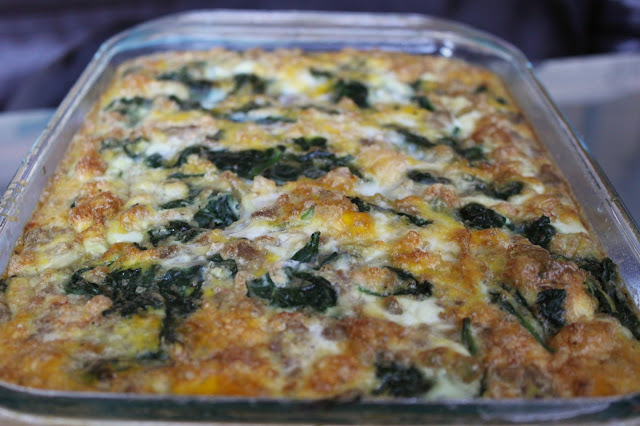 This is a fairly simple recipe that Cameron just threw together but it turned out really well! However, there are tons of variations you could use when making this dish, including:

-Incorporating other veggies: Bell peppers, shredded carrots, leftover brussels sprouts, whatever veggies you have on hand, you could probably throw them in! (I’d definitely make sure you saute them first though to soften them up!)
-Adding cheese: Cameron chose to leave the cheese out of this casserole in order to make it Paleo, but I know that incorporating some cheese (either to the top or mixed in with the eggs or both!) would be a tasty addition!
-More seasoning: Cam just used salt and pepper for this casserole, but adding a wider variety of herbs and spices could definitely kick it up a notch and we’ll be trying that in the future!
Bon Appetit! Xoxo