So I know it’s Monday and weekend is over (boo!) but I have a recipe today that I am so excited to share with you today!
Three words: Chocolate. Peanut Butter. Cheesecake. 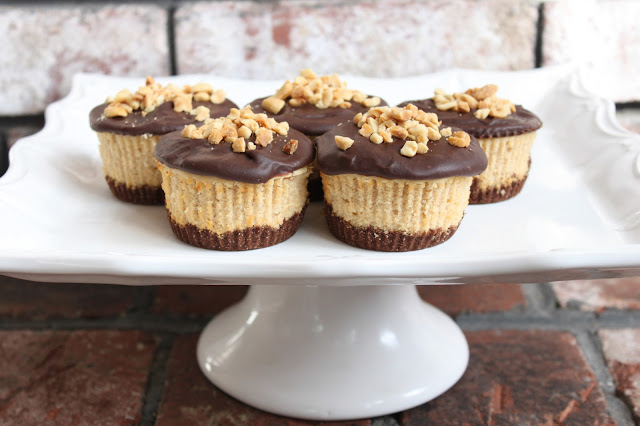 Do I have your attention yet?

Some friends had Cameron and I over for dinner last week, and I was requested to make a dessert (twist my arm!) and after much deliberation I decided on these chocolate peanut butter mini-cheesecakes because we happened to have some peanut butter on hand from making puppy chow (Midwest, what up!) during my sister’s visit a few weeks ago. They turned out really well and were a huge hit with our friends! 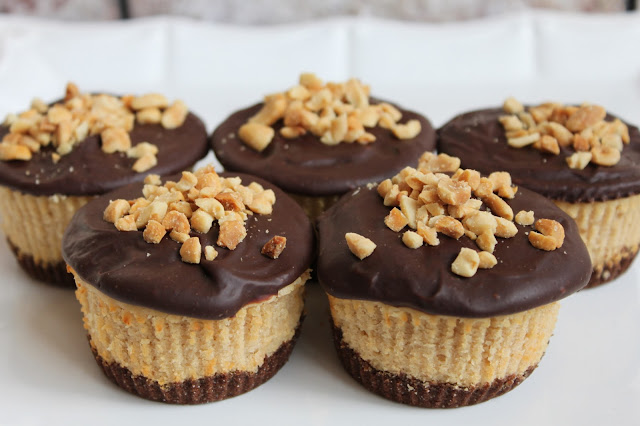 This recipe combines three of my favorite things in an adorable mini
portion, and it’s definitely going to be one of my new go to dessert recipes for
sure.  I love cheesecake but I rarely make it because it’s such a huge production (the springform pan, the water bath, all the time–so annoying). What’s great about this recipe is you still get the same effect of homemade cheesecake but it’s much easier. Way easier than making a batch of frosted cupcakes even. And the awesome part is that unlike cupcakes or other baked good that might go stale if you bake them a day or two before a party, these little guys store really well in the fridge so they’d be absolutely perfect to make in advance if you’re entertaining. 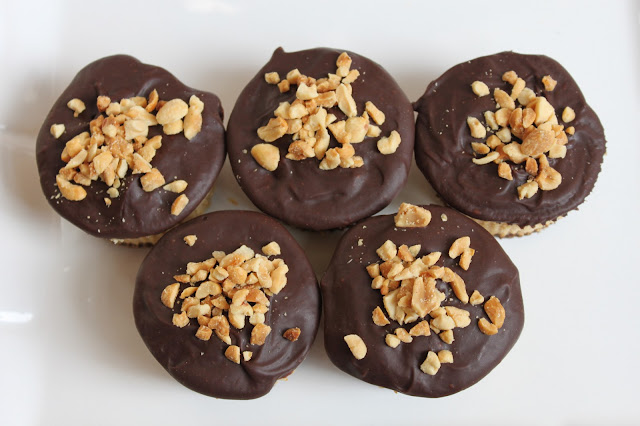 Plus, I personally like to stick to individual serving desserts like this for parties because 1) I feel like people are more inclined to actually take one if it’s not something they have to feel all awkward cutting a piece for themselves, it’s already portioned out into the right size 2) It’s less risky than making a big cake or pie or something (IMO) because if that burns or falls apart or something you’re screwed, where as with something like this if you mess up one or two, it’s fine. And honestly, I don’t think you could mess these up, they seem pretty foolproof! (Take that Ina!) I also like that it’s really easy to make them look pretty because the tops of the cheesecakes will be cracked when you pull them out of the oven, plus mine sunk a little in the middle once I let them cool. However, just cover those babies up in chocolate ganache and no one will be the wiser! 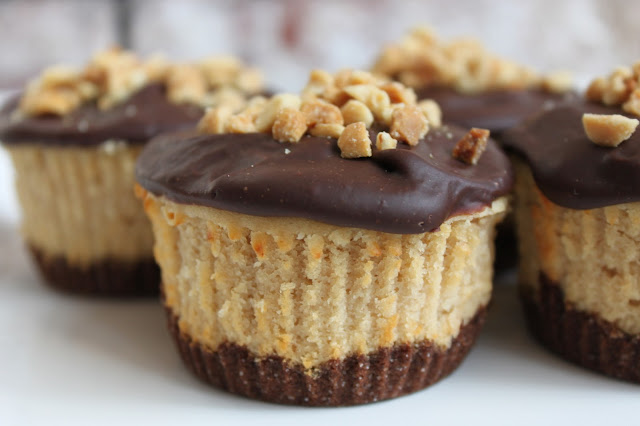 Moral of the story–you should probably make them ASAP. 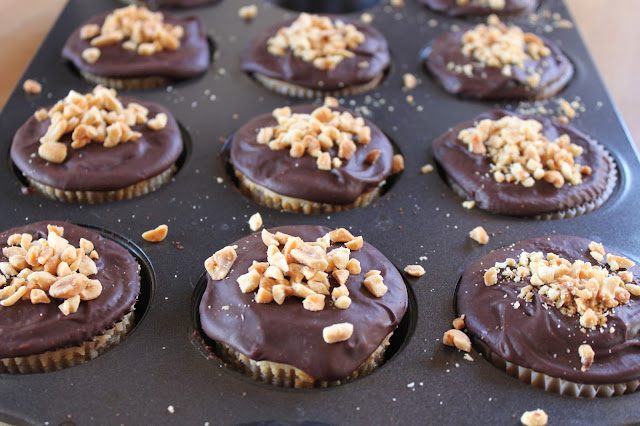 Preheat oven to 350 degrees F. Line a cupcake pan with 12 paper liners.
In a small mixing bowl, mix together the graham cracker (or cookie) crumbs and butter. Press crumbs onto the bottom of the cupcake liners. (The original recipe didn’t call for it, but I added 1 tablespoon of sugar to my crushed chocolate graham crackers/butter and then I baked them for 10 minutes before adding the cheesecake. The crust was still a little crumblier than I wanted, so next time I’ll use a little more butter and bake for longer!)

In a large mixing bowl, mix together cream cheese, peanut butter, sugar, flour, and vanilla with an electric mixer on medium speed until well combined. Beat in eggs until well combined.
Spoon cheesecake filling onto tops of crusts. Bake at 350 degrees F for 18-22 minutes or until set on top but still soft. Remove from oven and cool completely.
Place chocolate chips and cream in small microwave safe bowl in microwave on high in 30 second intervals, stirring after each interval, until smooth. Spoon the chocolate on top of each cheesecake. Sprinkle nuts on top if desired.
Refrigerate cheesecakes for at least 3 hours or overnight. Store cheesecakes in refrigerator. 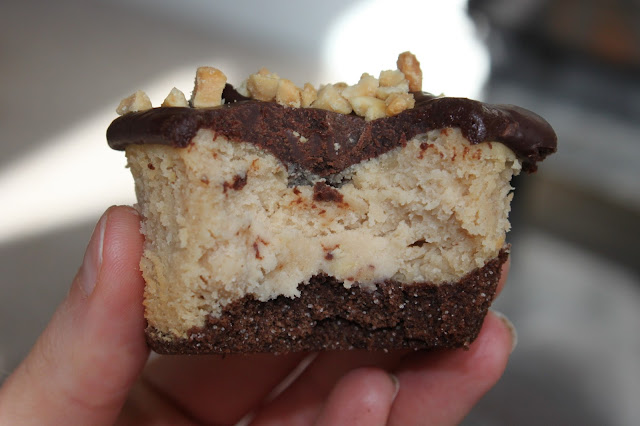 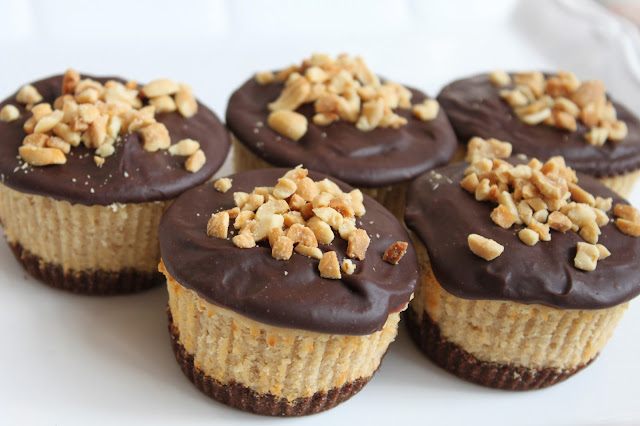 Seriously, someone please invite me over for dinner…I’ll bring dessert! Xoxo 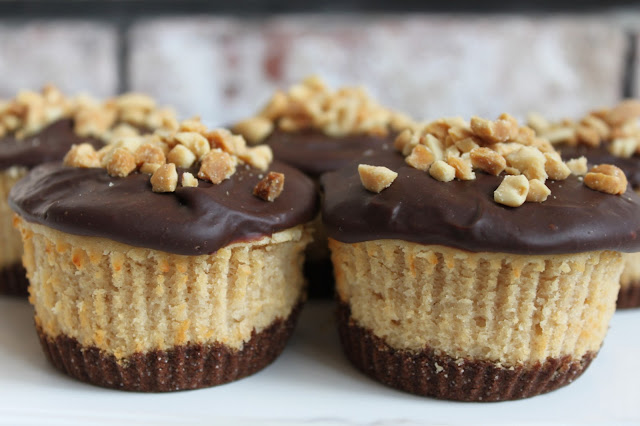