Happy Tuesday everyone!
So I meant to post these pictures yesterday, but didn’t quite get around to it…mainly because I was in bed by 9:30pm (which is super early for me) with one of the most excruciatingly painful sunburns I’ve ever had in my life, complete with feverish chills.
No bueno.
How did I get in this predicament you might ask?
Oh, just out enjoying the sunshine on our first hike of the year…that ended up being almost eight hours long. Let me explain… 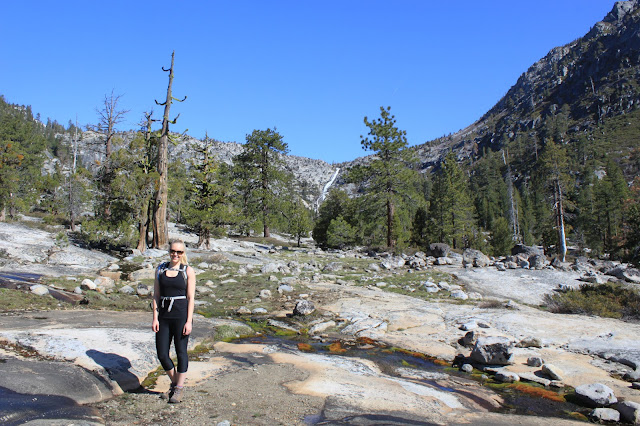 Our plan was to hike Horsetail Falls (pictured behind me) which is in California on the way from South Lake Tahoe to Sacramento. You can see the waterfall from the road, and since we’ve driven by it so many times we figured it was time we check it out. When we got to the trailhead where we had planned to park, it was still closed for the winter. So we drove up the road a little bit and parked in a turnout on the side of the road and walked back to the trailhead, and this was right around 9:30am.
We chose not to bring Lola because our neighbors had warned us that all the rough granite boulders on this hike had cut up their dog’s paws. In retrospect, it was a really good choice not bringing her because the hike we ended up doing was something she wouldn’t have been able to handle.
We started out on the trail, but it wasn’t super well marked so we figured we’d just explore and make our own way to the falls. This area is part of Desolation Wilderness, a giant protected wilderness area that covers a lot of the Tahoe region. Our plan was to hike up over the top of the falls and check out some of the lakes that we had heard were at the top. 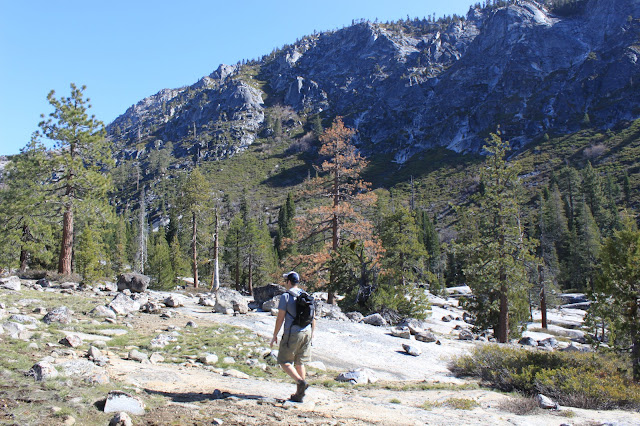 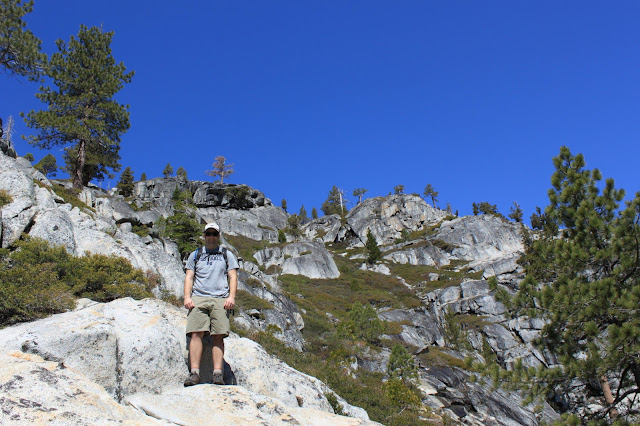 We decided that rather than head straight to the falls that we’d climb up to the top of the ridge first and then head across the top to the falls. Easy enough…not. This hike was definitely a full body workout because it was basically climbing up these giant granite boulders for most of the way up. Because we weren’t following any specific trail, it was essentially just Cameron and I trying to figure out the best way to get to the top. And trying not to fall to our deaths. 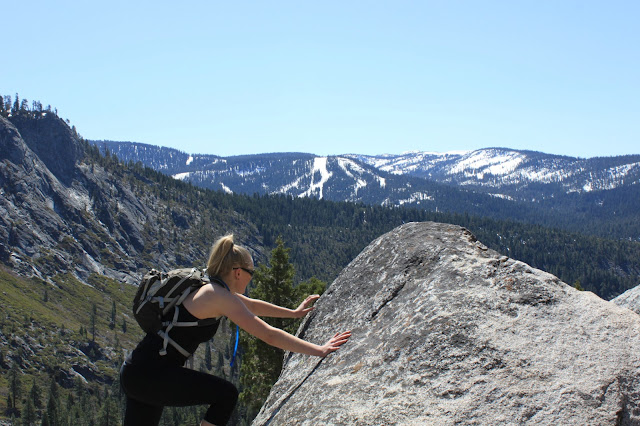 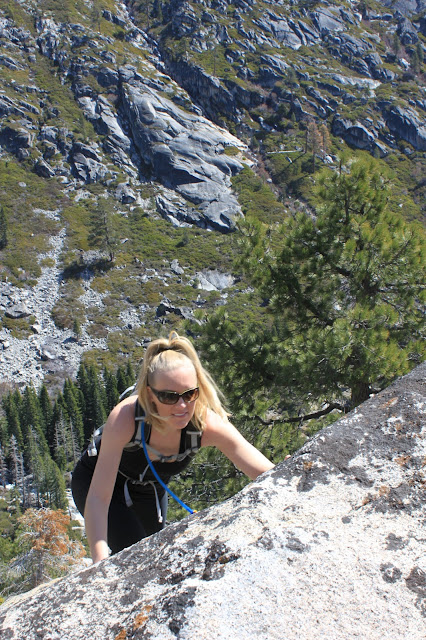 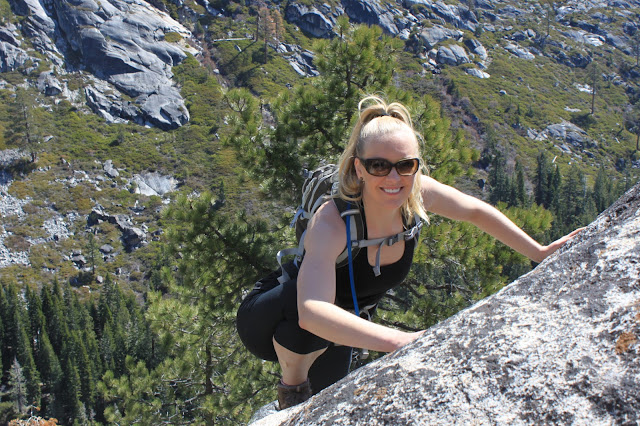 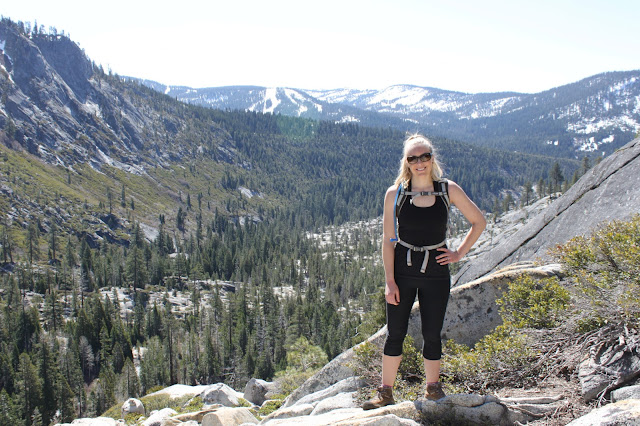 At this point, we were still kind of far from the falls, but kept heading up over the ridge and figured we’d make our way over eventually. 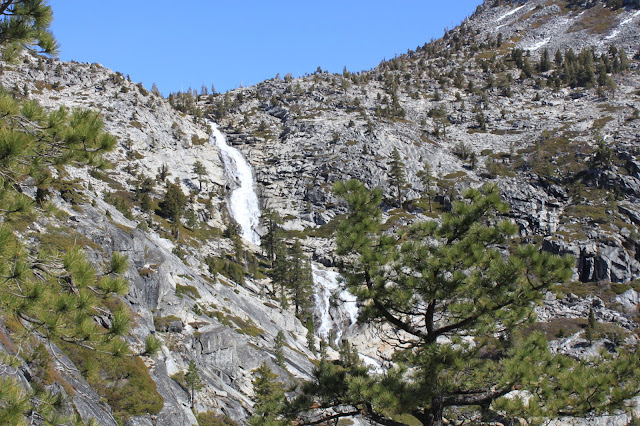 It’s funny, sometimes Cameron wants me to put the camera away and stop taking a million pictures…and then other times, he’s the one wanting to take a million pictures and suggesting poses. Like this senior picture-esque shot next to the tree with the waterfall in the background, it was definitely his idea. Love that guy. 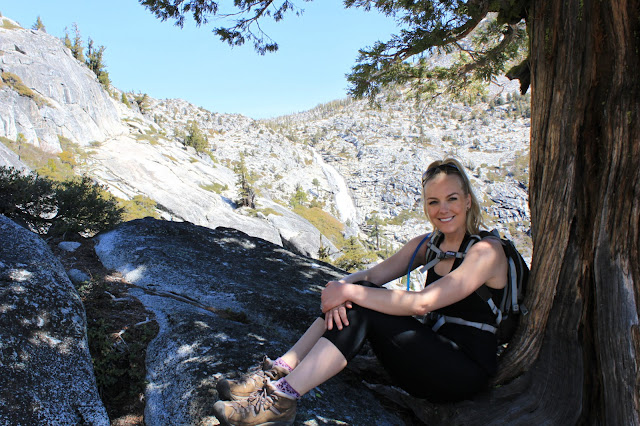 Once we got to the top of the ridge, we were met with snow and some nice views of Pyramid Peak! At this point we started making our way towards the falls, however, because there was no clear path we ended up continuing to climb up. After awhile, we saw some little lakes below us, but could not figure out a safe path to get down. At one point, it was literally so steep that we couldn’t walk down at all so we had to sit in the snow and scoot our way down using our bare hands and digging in our heels to keep us from sliding into the rocks. It was definitely challenging! 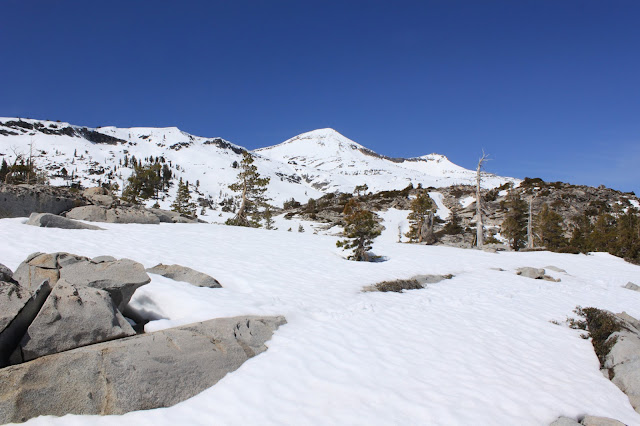 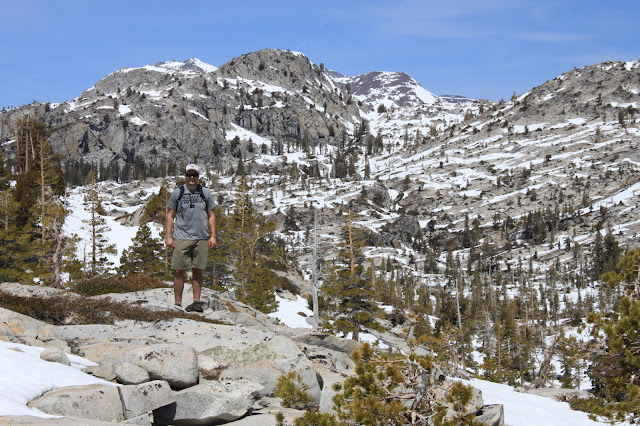 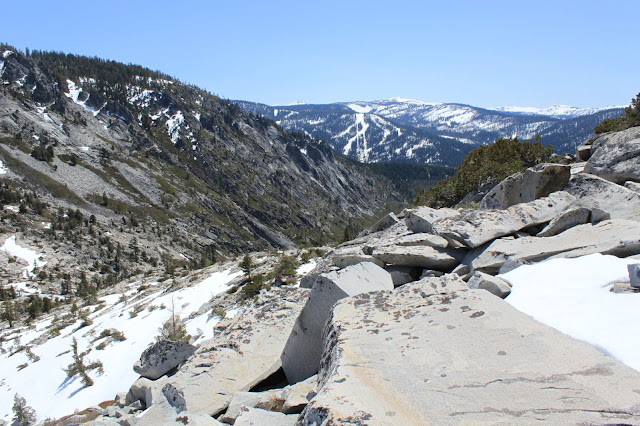 After what seemed like forever, we finally made it down to the lakes and they were gorgeous! The water was so clear, and it was a great place to stop, eat lunch, and relax. 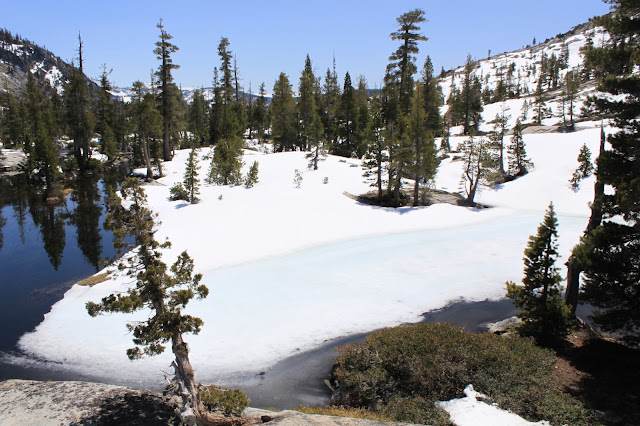 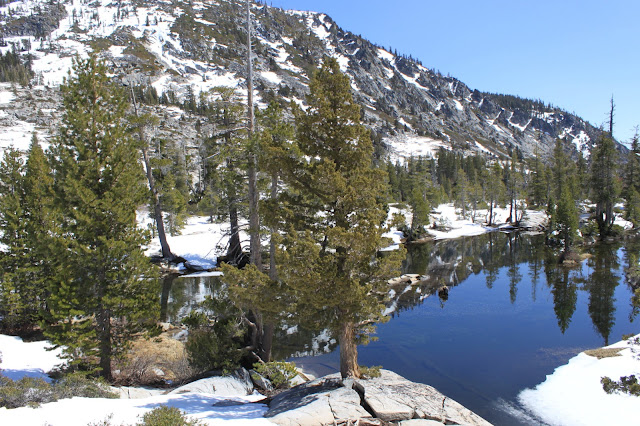 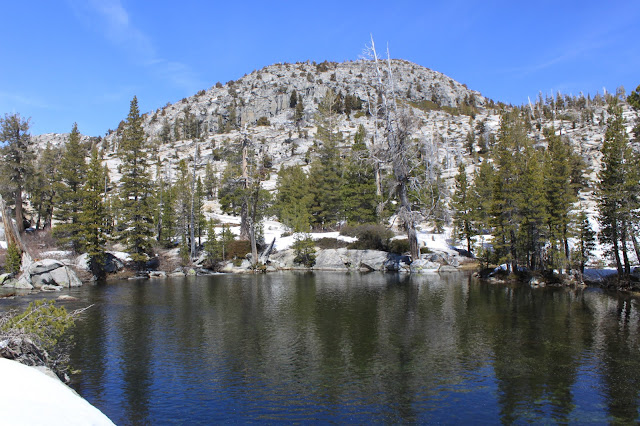 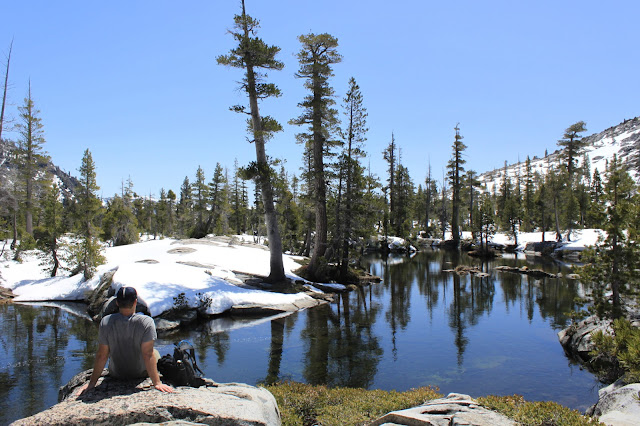 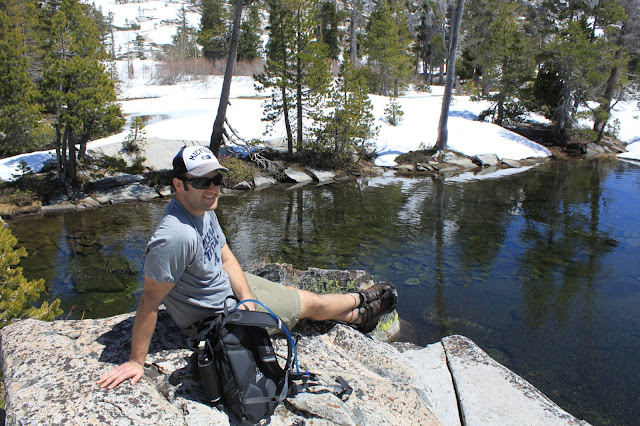 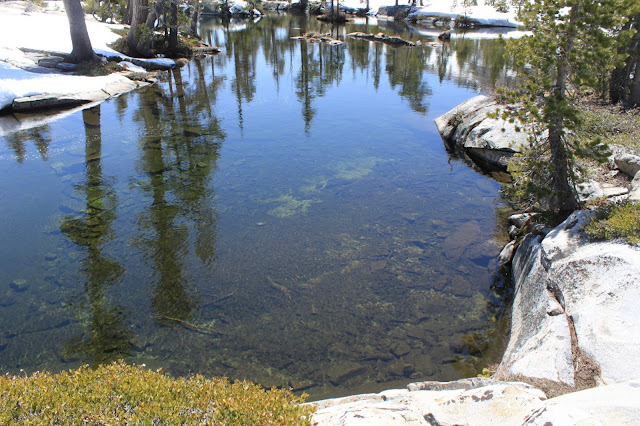 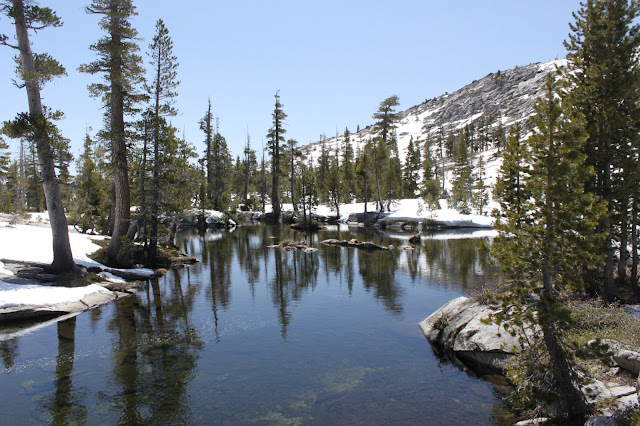 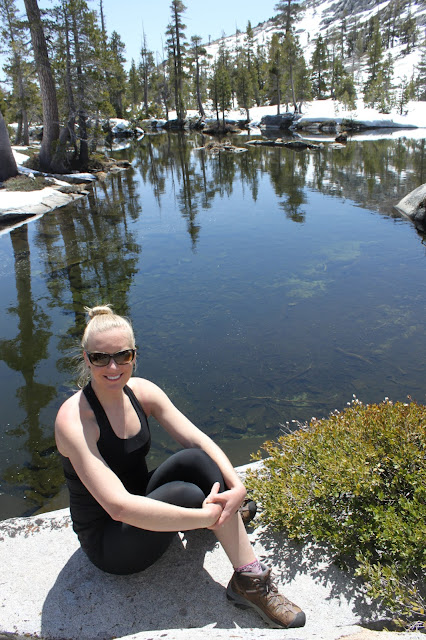 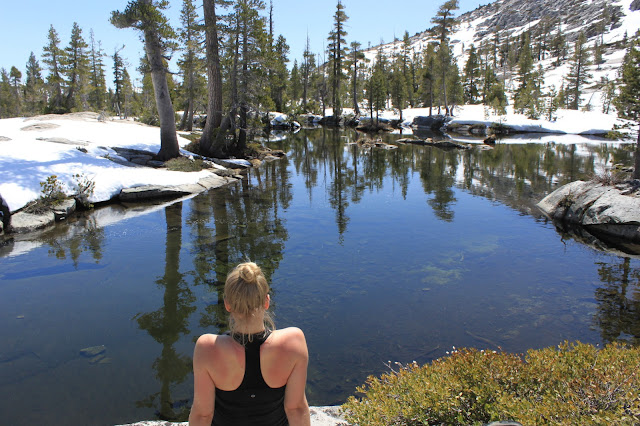 This was also the point that Cameron was telling me to put on sunscreen, but I wasn’t listening. Even though it was sunny, it also wasn’t super warm–I mean we were hiking through snow for pete’s sake! I put a little sunscreen on my shoulders and neck to humor him, but figured I’d be fine. So dumb. So so dumb. Thank goodness the tinted moisturizer I was wearing had SPF 20 in it our my face would have gotten toasted! The sun was really intense up there in the mountains, so lesson learned big time because I’m still seriously feeling the effects of my irresponsibility today.
By this time it was mid-afternoon and we literally hadn’t seen a single person since starting our hike…and considering we were way off the trail in the middle of Desolation Wilderness (which is a fitting name), we figured it was time to start trying to make our way back. We were still pretty far above the falls at this point, and needed to figure out how to make our way over to them…and more importantly, how to start making our way down. 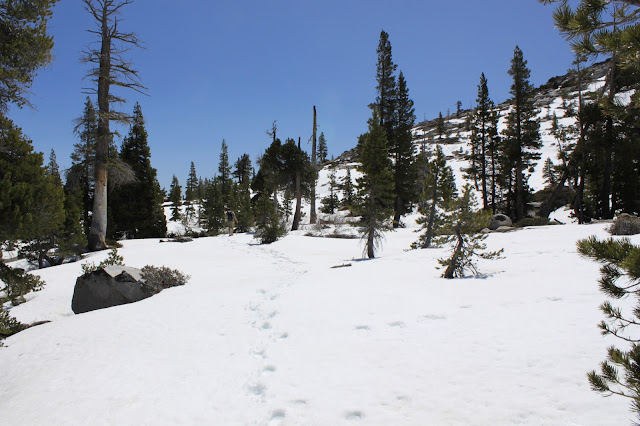 Luckily we spotted some other tracks through the snow that we tried to follow to make our way out. Walking through the snow was definitely a little nerve-racking as it was starting to melt and we didn’t know what was underneath. Sometimes one of us would take a step and our foot would sink down into the snow up to our thigh, so we were definitely moving quite slow as we didn’t want to crash through the snow! (Both Cameron’s mom and my mom read the blog so I’m guessing they’re probably not super happy about this post right now…sorry…) 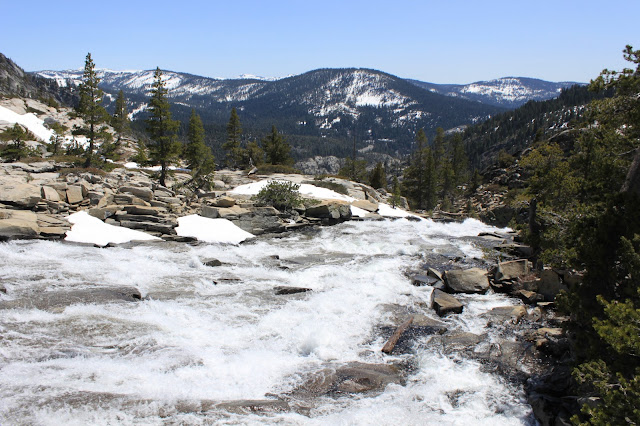 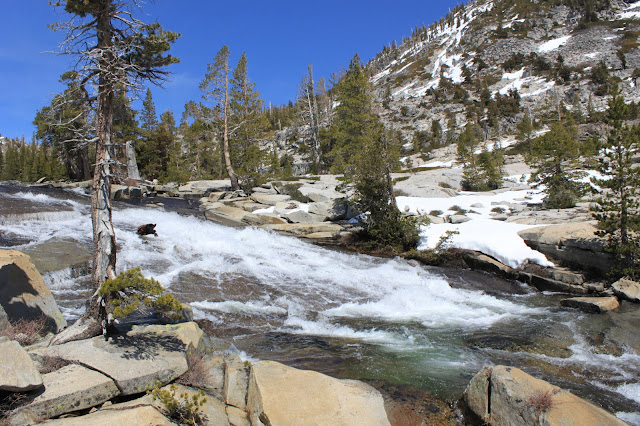 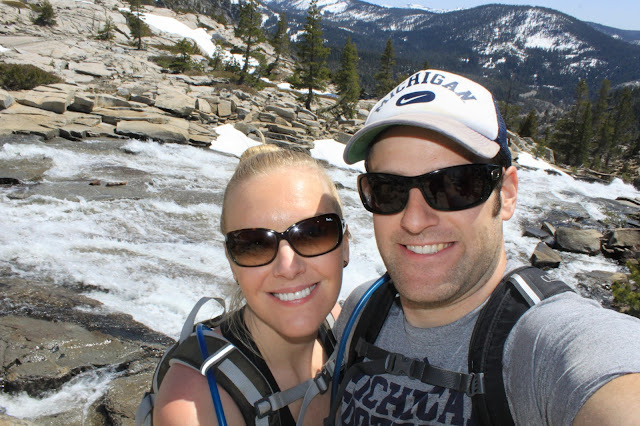 We finally made it to the very top of Horsetail Falls and it was gorgeous! After standing there for a few minutes taking in the sheer power of the rushing water, we started trying to figure out how we were going to get down because at this point we still had a long way to go and still had not seen any other people the entire day. There’s definitely something a little worrisome about looking out across the mountains and knowing your car is really far away and you have no idea how you’re going to get back. But hey, at least the views were great! Going down was physically very challenging. We were already pretty tired at this point and the granite is super hard, so heading down was really tough on the joints. When things are steep, it can often be much more difficult to get down than it is to climb up something, especially when a lot of the rocks were wet. For me, this point in the hike was really mentally challenging as well because often when we’re hiking on a trail I can get in a rhythm and zone out, but that was not the case with this hike. I felt like my brain never got a break because I was constantly thinking about my next step, where I was going to put my hands, and how I could make it down this next rock without slipping. 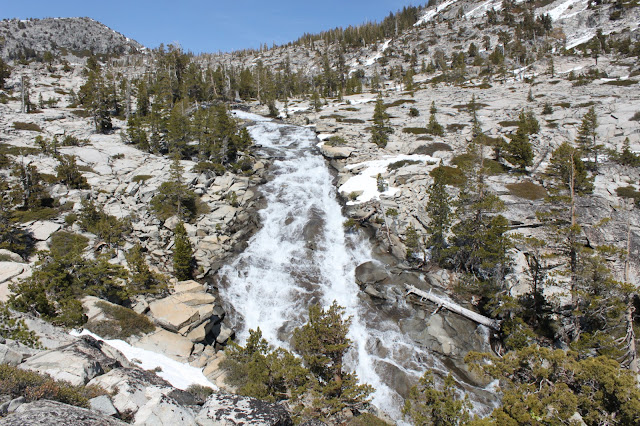 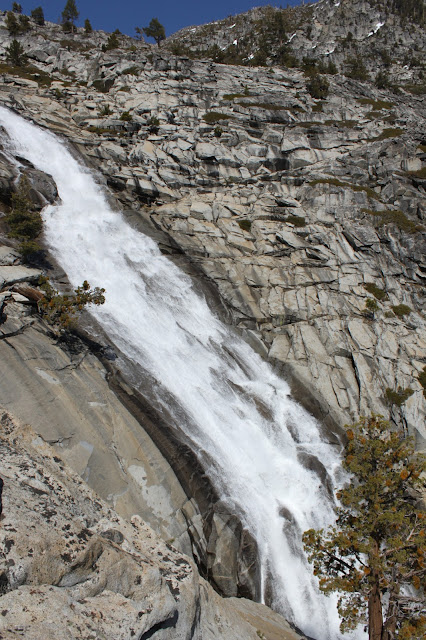 Although there were a few semi-scary moments where I really thought I wasn’t going to make it down (mainly because some of the rocks were covered in water and we literally had to inch our way down on our butts or our stomachs holding on for dear life), we finally started to make progress. Once we made it most of the way down the falls, we finally started seeing people again which was a huge sense of relief! 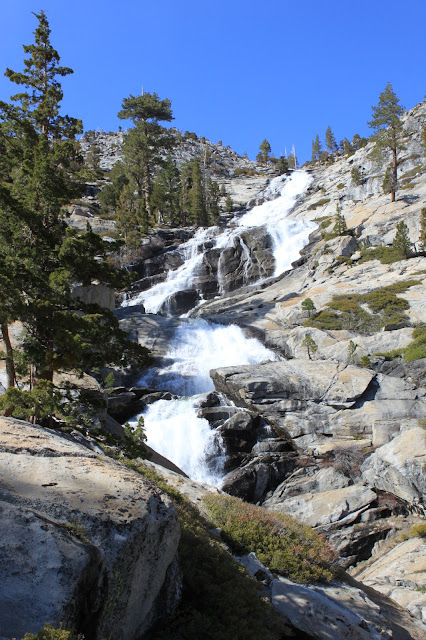 The falls are definitely gorgeous and this was a great time of year to see them as they were roaring with all the snowmelt! We finally made it back to our car at 5pm, so it was quite a long day! I have no idea how far we went distance-wise because so much of the day we had to move really slowly due to the conditions, so it’s really tough to say how much ground we might have covered. But despite my (awful) sunburn and a few scary moments climbing, we really did have fun and it really was a great to be outside. Being out in the mountains away from people and technology and noise is so incredibly peaceful and relaxing. I’m really looking forward to doing a lot more hiking this spring and summer…but in the future, we’ll probably stick to hikes where we can take Lola and try to stay on the trail!
Hope you’re having a great week everyone! Xoxo
{I’m linking up for Travel Tuesday!}