Monday night, I had the privilege of attending a Bloggers Dinner hosted by Farmers Revival!
The brainchild of Dave Rose, Farmers Revival is an inventive concept in fast casual dining that he is hoping to bring to Portland in the near future. His vision is to have a gourmet salad bistro that utilizes the abundance of fresh produce available here in the Pacific Northwest to create food that’s both healthy and flavorful. He plans to use organic, locally-sourced ingredients in these artisanal salads, along with offering other items like soups and frozen yogurt as well. He is currently in the process of raising awareness about his idea and securing financial backing to bring this dream to life. 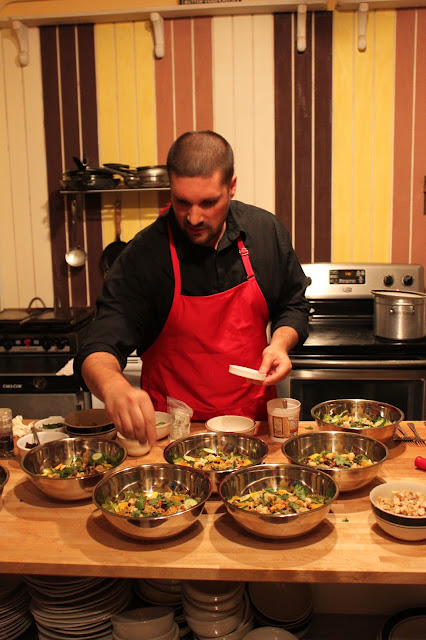 I actually came across Farmers Revival through their Twitter account and was immediately intrigued by the concept after checking out the videos on their Kickstarter page. Dave was kind enough to include me in the complimentary dinner he was putting together to allow a group of Portland food bloggers to try out his salads, which was really nice of him considering I’m still so new to the area! He hosted the dinner at his parents’ adorable restaurant, Mark’s NW Table, in Gresham, OR and even though it was a little bit of a trek from Cam’s parents’ house, I’m so glad I was able to attend!

Now on to the important stuff–the food! 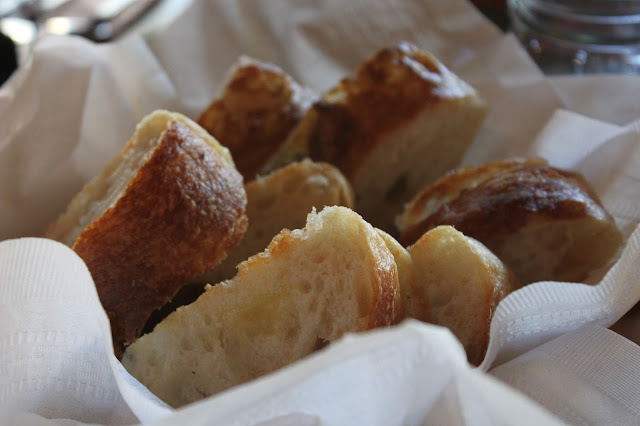 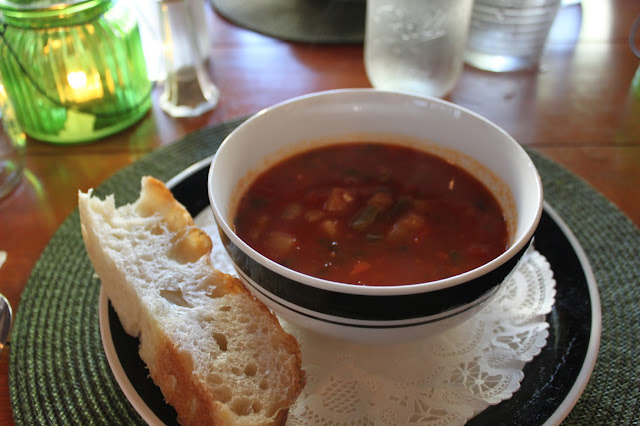 …which paired perfectly the hearty bowls of vegan minestrone soup that came out next! 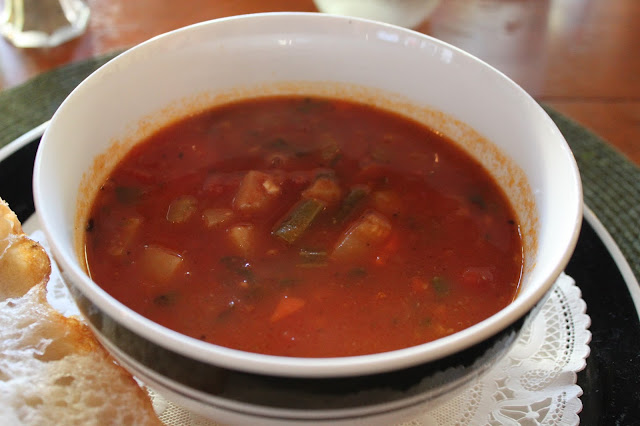 The soup was full of fresh veggies and so flavorful. Dave said that his plan would be for Farmers Revival to offer at least 3 homemade soups each day, with this minestrone being a menu staple. 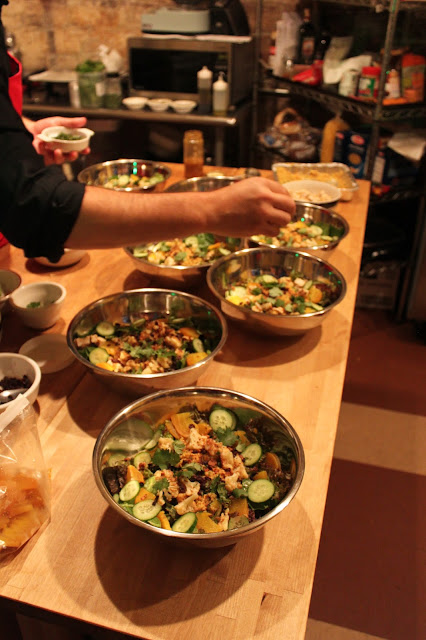 Next, we headed back to the kitchen to see Dave putting the finishing touches on the salads! 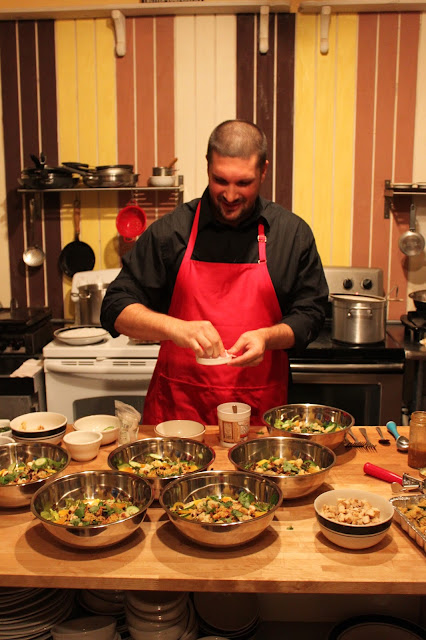 He may be smiling but Dave takes salads very seriously! His plan for the menu at Farmers Revival is to feature eight different signature salad that will showcase flavors from around the world. 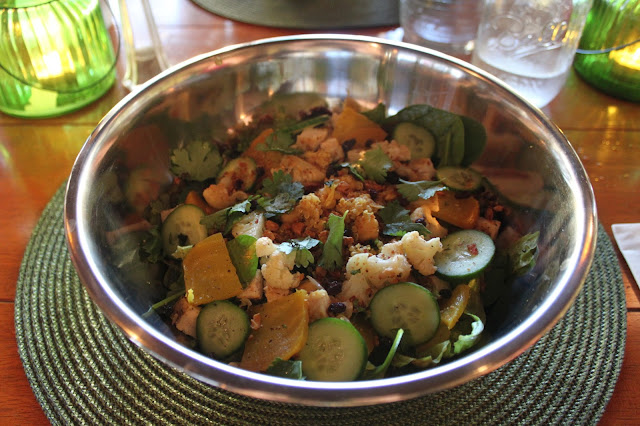 Dave chose to serve us his Indian-inspired salad and I was extremely impressed (as were my fellow bloggers)! To start, I found this dish to be very visually appealing thanks to the wide variety of fresh veggies that included cucumbers, cauliflower, chickpeas, golden beets, and mixed greens. Dave told us that he got the majority of his ingredients at the farmer’s market as one of the main ideas behind the Farmers Revival concept is using produce that is locally sourced. In addition, this salad had a lot of great texture thanks to the addition of some curried quinoa and spiced nuts. 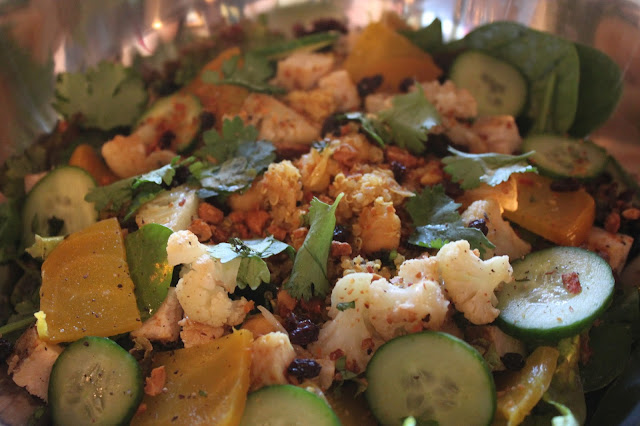 So how did it taste?
FANTASTIC!
There was definitely a lot going on with all the different ingredients, but everything worked surprisingly well together. The real star of the salad (in my opinion) was the curried vinaigrette dressing; Dave explained the he actually roasts the spices to bring out their flavors which I thought was really impressive. The dressing did an excellent job of tying everything in the bowl together and it was so delicious! I am normally not a huge fan of Indian food, but I absolutely loved this salad and enjoyed every bite. The general consensus from the other bloggers at the table was that this is probably not the salad any of us would have chosen if we had seen all the ingredients listed together on the menu, but we were all very pleasantly surprised. Plus, it was great knowing that this meal not only tasted good but was also filled with so many nutritious ingredients as well! 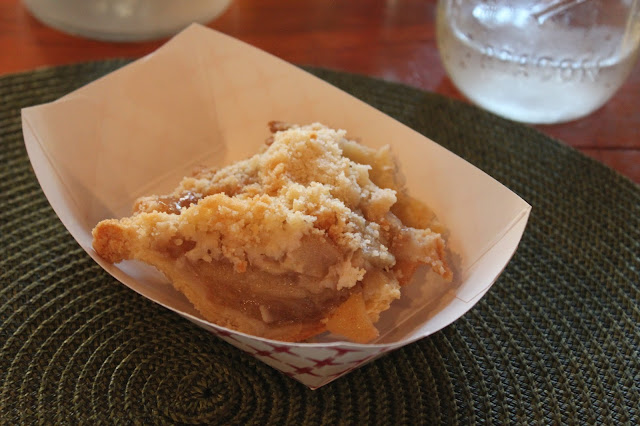 After that amazing salad, I didn’t think things could get much better but Dave was kind enough to serve us some of his mom’s homemade apple pie for dessert! The crust on this pie was really rich and buttery, it was seriously so so good! His mom is actually selling these mini pies out of their restaurant in Gresham, and makes other varieties like peach and berry as well. Dave said he’d hopefully plan to sell the pies at Farmers Revival in the future, but for now you can purchase them at Mark’s NW Table!
(And trust me, they are worth the trip!)
Overall, it was a really lovely evening filled with delicious food and great conversation…about food…obviously…ha! Dave seems like a genuinely nice guy and it was really great to be able to meet his wife and little boy at last night’s dinner as well because it’s evident family is really important to him. Listening to him talk about Farmers Revival, it’s clear that it’s not just about opening any old restaurant, but that this salad bistro is truly his passion. I really enjoyed hearing more about his vision and creative ideas for bringing this well thought out concept to life.
You can check out his Kickstarter here, and this video does a great job of giving a more in-depth look at what Farmer’s Revival is all about:
In addition, you can also connect with Farmers Revival on Facebook and Twitter!
It was also really great to be able meet some fellow
bloggers with a passion for food at the dinner! I enjoyed getting to know all of
them and have definitely added some places to my list of “must-try” Portland
restaurants thanks to their recommendations! You can check out their reviews here:
Eating My Way Through Portland | Talk.Eat.Drink.Portland. |  Pechluck’s Food Adventures
I am excited to follow Dave’s journey and really hope that his dream to open Farmers Revival becomes a reality as I’d really love to have another one of his tasty salads again soon! Xoxo