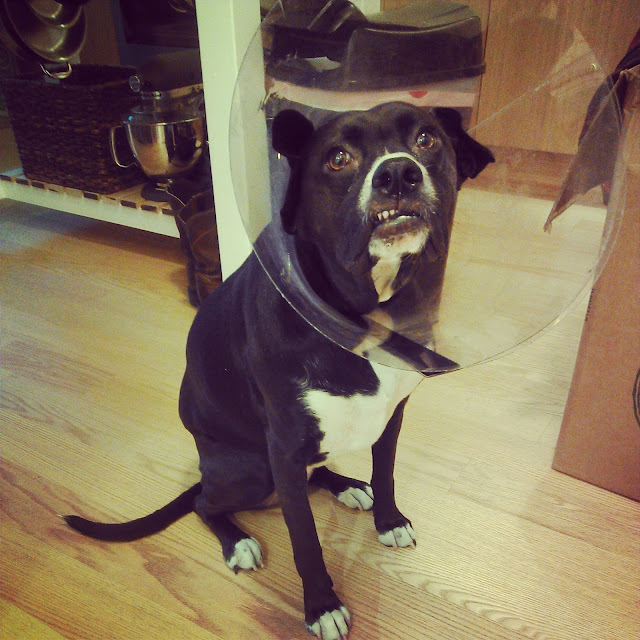 Thank goodness it’s Friday, that’s all I have to say right now.
I intended to share a different post today…but as you might have guessed by these pictures of Lola wearing the cone of shame, that’s not happening. 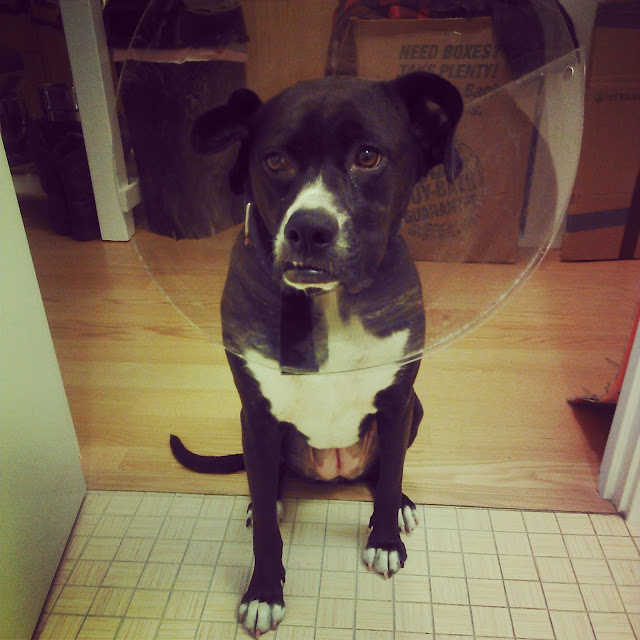 First of all, Lola is fine.
(even though she looks pretty mad in these pictures haha)
She has had a little rash on her stomach the past few weeks, but we figured it was no big deal and probably just something that would go away on its own. Well this week it got much worse and she’s been licking at it a lot. Last night we decided we should take her to get it checked out ASAP, but we don’t have a vet here in Portland yet. We ended up taking her to this really nice 24-hour animal hospital; it was a little frustrating because we had to wait for quite awhile and then the vet we saw didn’t seem very confident in her diagnosis of what was causing the problem. She thinks it may be some sort of minor staph infection, but wasn’t totally sure. She gave us antibiotics, a topical cream, and the cone to keep Lola from licking at it. We’re going to keep an eye on it, and hopefully she starts improving soon!
And as you might of guessed she’s not a huge fan of the cone, but she seems to be getting more used to it. She still gets really confused going up and down stairs (which is hysterical) and her cone keeps running into the boxes when she walks around the apartment. And yes, it is hilarious. I do feel bad for her but she seems  like she’s still pretty happy (especially because I’m giving her her antibiotics in a piece of turkey), so I think she’s doing OK with everything. Plus, she is such a goofy looking dog anyway, adding the cone just makes her look that much more ridiculous. 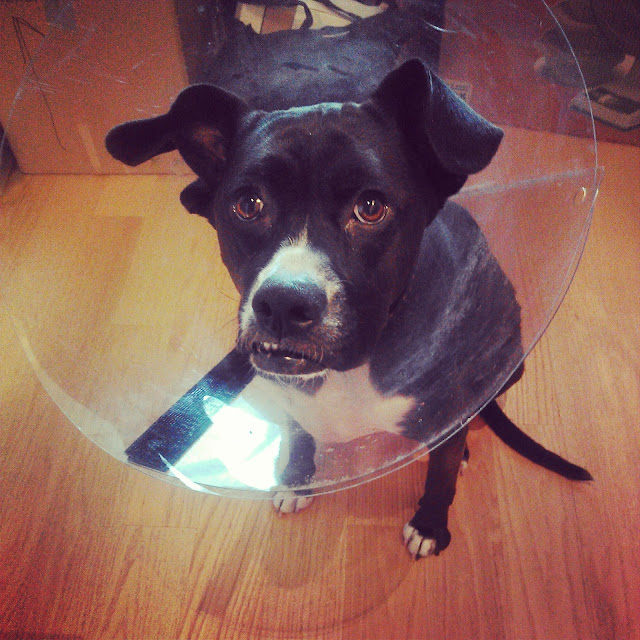 So yeah, I usually try to keep things positive here on the blog, but today I’m just kind of worn out.
Work has been really crazy busy for me this week and although I love my job, I’ve feel like it’s just been stressing me out a little more than normal lately with everything else we have going on. Because of work, I haven’t had much time to unpack yet which means we still have boxes all over the apartment and our things are nowhere near organized. Cam’s also been out of town for work this week, and I never sleep all that well when he’s traveling so that’s worn me out as well. We haven’t had a chance to go grocery shopping yet, and everything just feels sort of chaotic and unsettled right now. Also, I really do love working on my blog and I have so many ideas and things I’d like to do with it in the weeks and months to come. However, I just feel like I don’t have the time to make them a reality yet, which is frustrating because I feel like I keep adding to my to-do list and never checking things off. Finally, our new couch is getting delivered tomorrow, but I’m concerned because the vet said that the antibiotics Lola is on could upset her stomach…so I really don’t want her getting sick on the new couch. Ugh.

(Also, I’m not trying to complain because I know people have way bigger things they’re dealing with than these minor problems…but just trying to be honest how I’m feeling this week)
My goal for this weekend is to try to get our apartment in some some semblance of order, to get Lola feeling better, and to re-charge a little bit. I know that once things are organized and we’re in a little bit more of a routine, I’ll feel much better about life in general.
And overall, we are loving being in downtown Portland so far! It’s been so much fun to walk everywhere and I’m really looking forward to doing more exploring this fall. That’s another reason why I’m so ready to just have the apartment done is so that way we can really get out and enjoy the city!
Have a great weekend everyone! Be sure to follow me on Instagram (@inthepinkandgreen) for the inevitable Lola cone photos I’ll be posting this weekend 🙂