We leave for Thailand one month from today! Eeek!
We still have quite a bit of planning to do (double eek!) but I am getting super excited for this trip! However, I don’t think the fact that we’ll be sitting on the beach so soon has really sunk in yet as I’ve been thoroughly loving sweater weather and eating my way through Portland (i.e. my last post). It’s going to be tough to avoid temptation with Thanksgiving next week and December coming up, so I’m just going to try to enjoy treats in moderation (because let’s be serious, I love me some holiday food) and do my best to make healthy choices when I can.
One of those great times to make healthy choices is by trying to make our meals as Paleo as possible when we make dinner at home. I’ll admit, I’ve been somewhat uninspired when it comes to meal planning/cooking healthy dinners since moving into our apartment thanks to the abundance of restaurant options in Portland. But the other night, Cameron got the (wonderful) idea to make a Paleo version of Beef Rouladen and it was SO GOOD that I just had to share it! 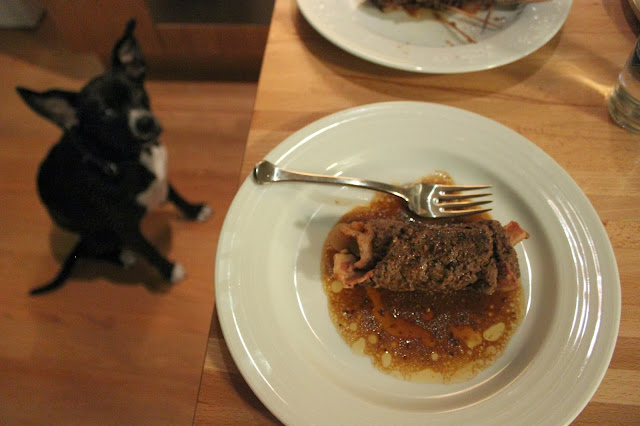 Lola clearly thought so too 🙂
In general, I enjoy baking more than cooking. I like to be able to follow a recipe exactly and have something turn out. However, Cam really likes cooking (which is awesome) and he enjoys improvising in the kitchen. He glanced at a few recipes before deciding to just wing it when making this rouladen.
And I took pictures while he cooked.
Because that’s normal.
Ha.

But seriously, it turned out so well and was DELICIOUS! I don’t have an exact recipe to share but it’s actually pretty simple, so hopefully the photos will suffice for anyone interested in recreating it! 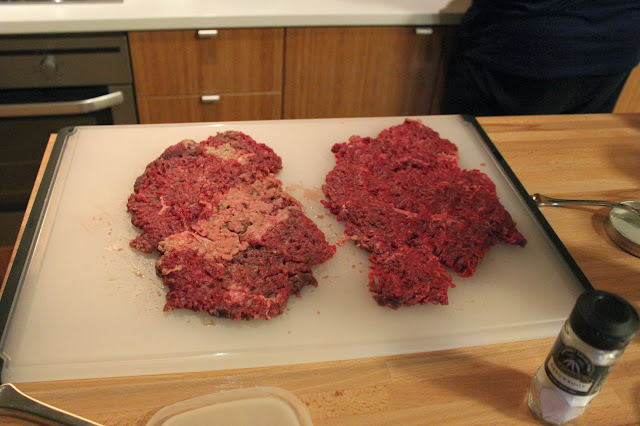 First, you need beef.
(See I told you this wasn’t going to be super specific, ha!)
He used cube steak and it worked great for this, but you could also use thinly sliced flank steak. 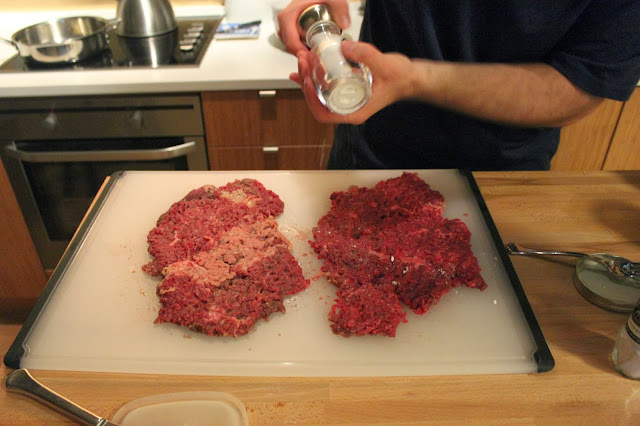 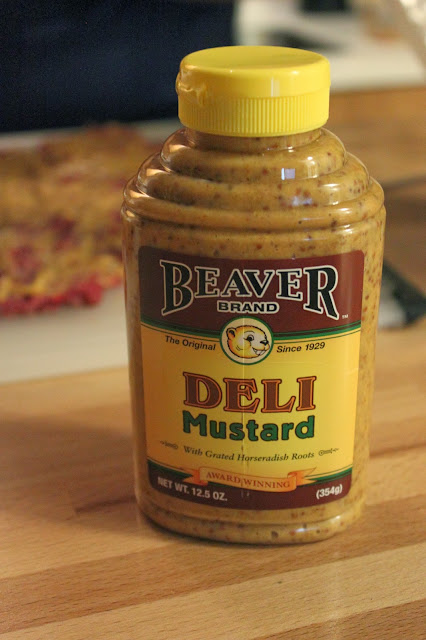 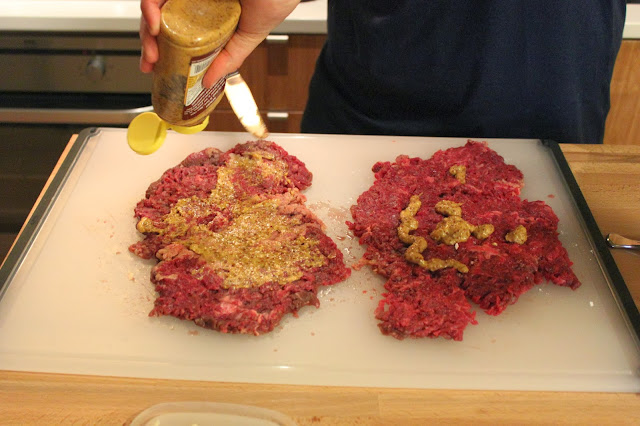 Spread it on your beef. 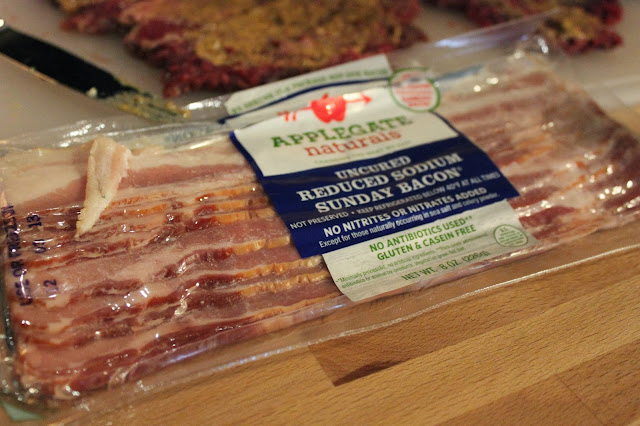 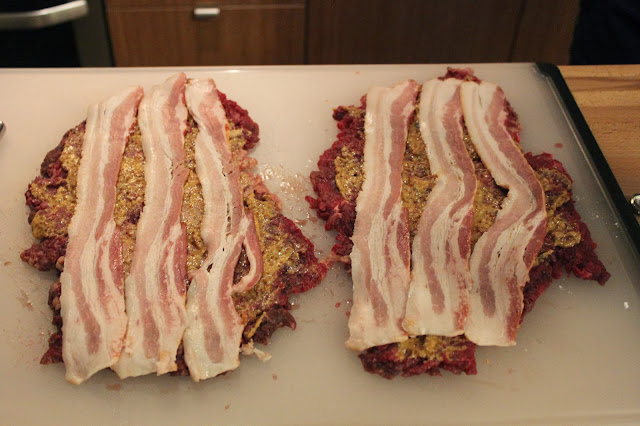 Lay out strips of bacon on top of your mustard-covered flank steak.
Part of what makes this recipe so easy is you don’t have to cook the parts before assembling it. 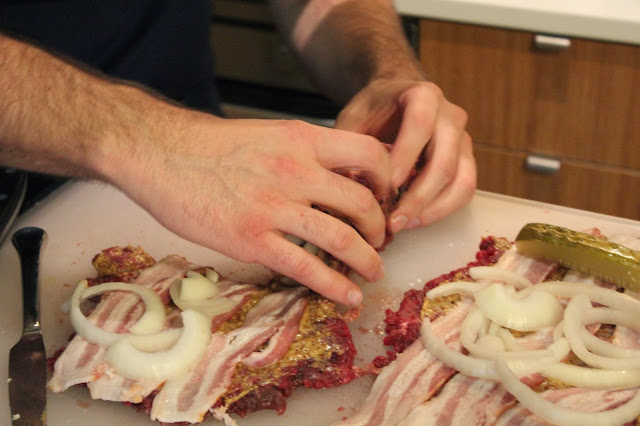 Take some sliced onions and put them on the beef, then take a pickle spear and lay it on one edge. 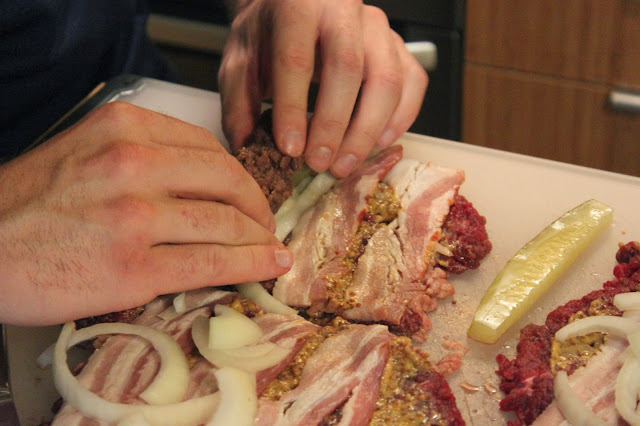 Then roll the beef around the pickle spear like so. 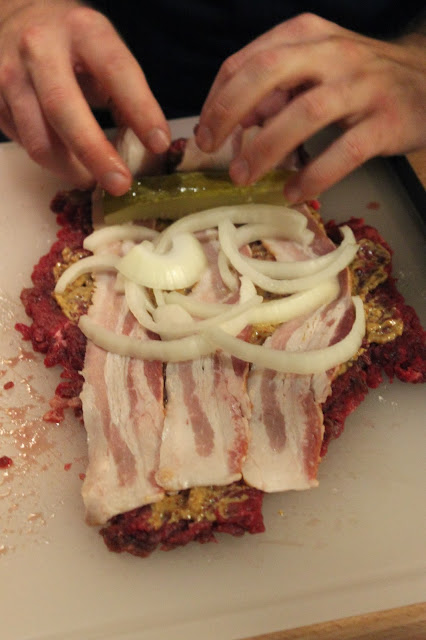 Cam cut one of the pieces of beef in half to have two smaller rolls and left the other piece whole. 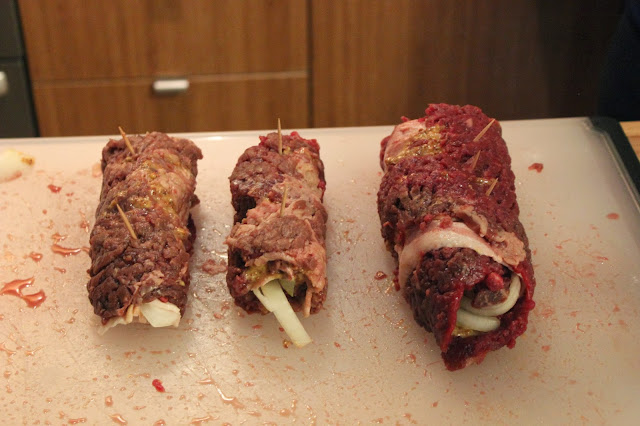 My recommendation would be to cut them in half though, as we both thought that seemed better.
You then secure the rolls with toothpicks (or you could use twine). 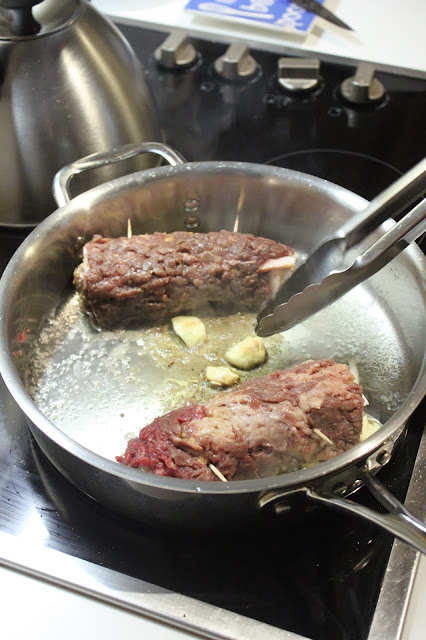 Saute some garlic in olive oil over medium-high heat and then add your rolls of beef. 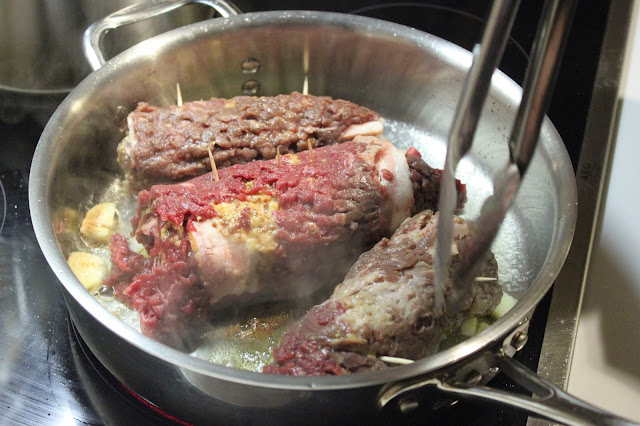 Brown the rolls on each side and then add some beef broth to the pan.
Cover the pan and let the rouladen finish cooking through in the broth. 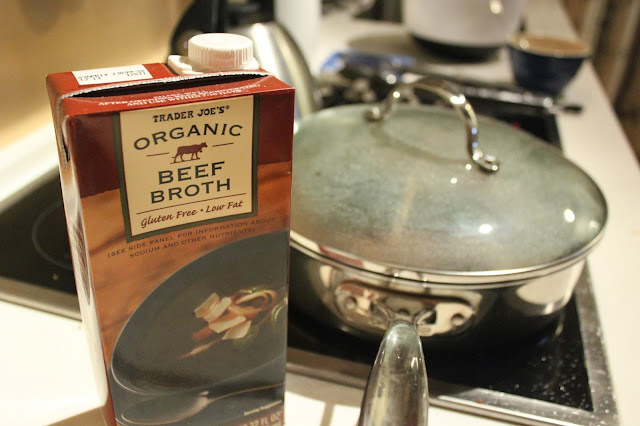 I went to go do something else at this point in the cooking process, so I don’t have pictures of the remaining steps. Whoops.
However, Cam let the beef cook completely with the lid on, then I believe he removed them to a separate plate and added a little arrowroot to slightly thicken the remaining broth in the pan. 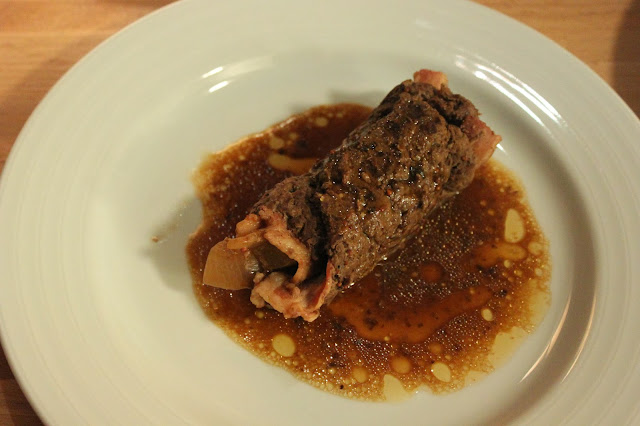 And there you have it, dinner is served! 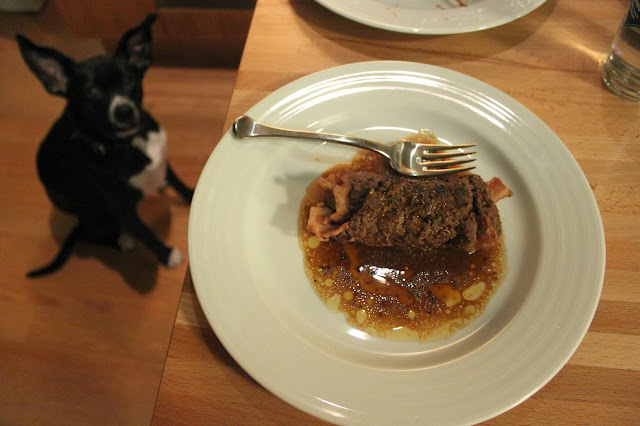 “Seriously? You’re just going to photograph it when I could be eating it. WTF.” – Lola
#blogdogproblems
Rouladen is such a perfect fall dinner as it’s very hearty, and I love that it’s also Paleo. The bacon and pickle spear made it so flavorful and we both cleaned our plates! Definitely give it a try!

PS: If you do want a more specific recipe to follow, here are some links (1 / 2 / 3) to other Paleo rouladen recipes 🙂