Happy Hump Day everyone!
It’s officially the holiday season…and in Portland, that means it’s time for holiday seasonal beers!
This time of year, lots of breweries release special beers to celebrate the season; however, Lompoc Brewing takes things to another level and they’re actually releasing eight holiday seasonals this year! They released these special beers to the public yesterday and they’re now available at their five different locations here in Portland. However, I had the privilege of getting a sneak peek, or should I say sneak taste, of these beers late last month at their 2013 Holiday Beer Tasting. To be completely honest, I wasn’t all that familiar with Lompoc as a brewery before this tasting. Being newer to Portland, I’m still getting the lay of the land when it comes to the robust brewery scene here, however, I was very impressed with everything I tried at the tasting. All the beers were really solid, and I think the fact that they’re able to put out holiday seasonals in such a wide range of styles really showcases their capabilities and creativity as a brewery.
The Holiday Tasting was held in their Sidebar tasting room, which is next door to their 5th Quandrant brewpub in North Portland. This is a really cozy space that can be rented out for events, but they also have it open during select hours to taste their beers. It would be a perfect venue for a party! 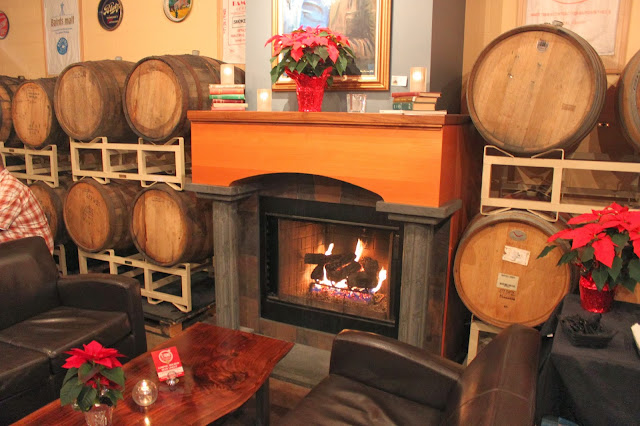 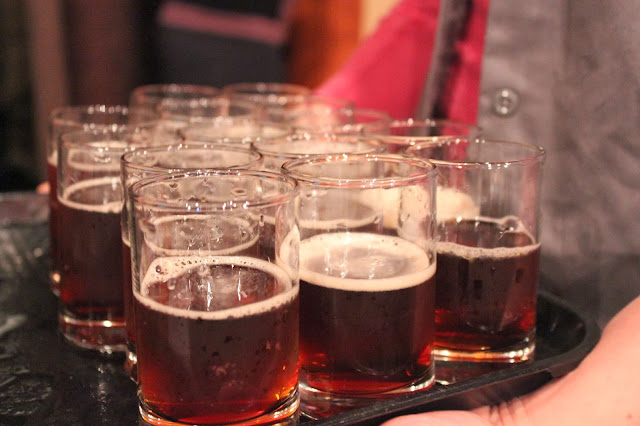 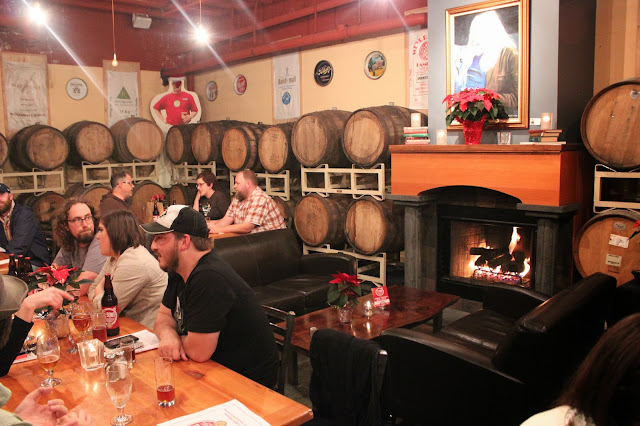 We got to sample all eight holiday 2013 seasonals during the tasting–here’s a quick rundown of this year’s lineup, along with the descriptions we received to go with each beer: 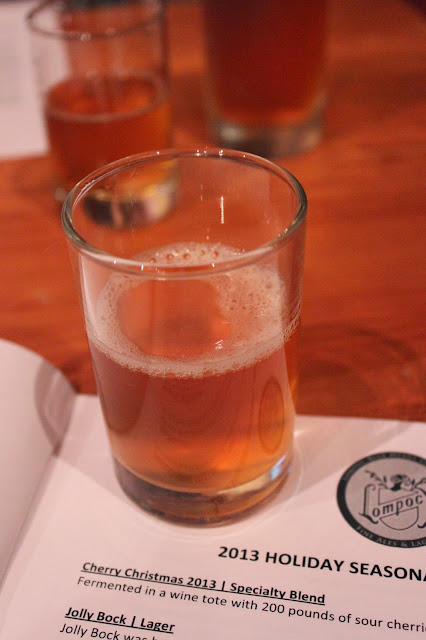 Cherry Christmas 2013 | Specialty Blend
Originally brewed in a wine tote in August 2013 with 200 pounds of sour cherries, this beer sat on the cherries for a month, and was then transferred to a stainless steel tank and blended with a touch of gueze brewed in February 2010. Pouring a bright pink color with a fruity aroma this crisp, refreshing beer has hints of cherry and finishes slightly tart. 5% ABV 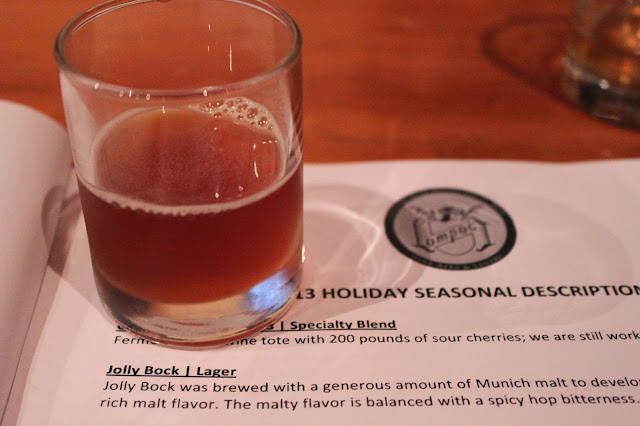 Jolly Bock | Lager
Jolly Bock was brewed with a generous amount of Munich malt to develop the deep amber color and
rich malt flavor. The malty flavor is balanced with a spicy hop bitterness. 7.3% ABV 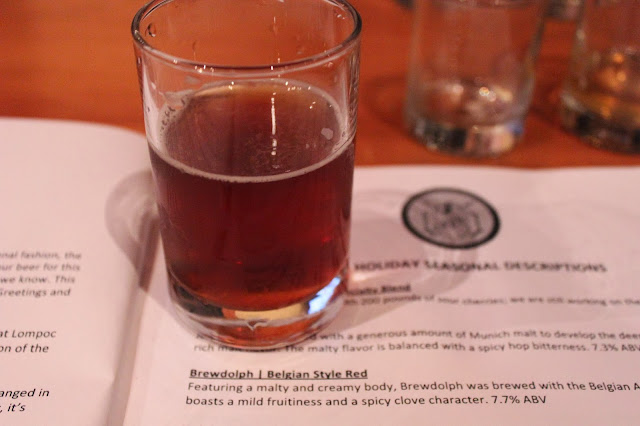 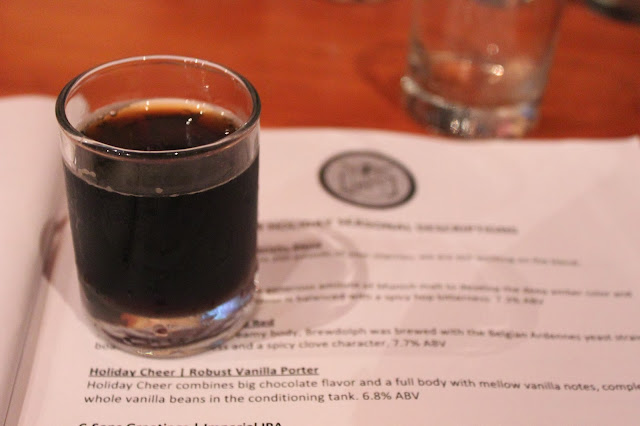 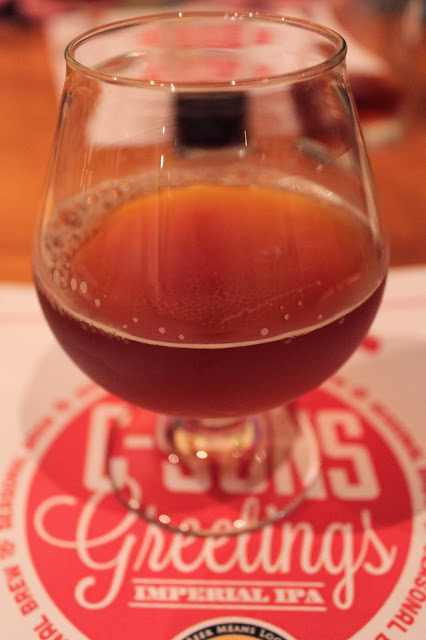 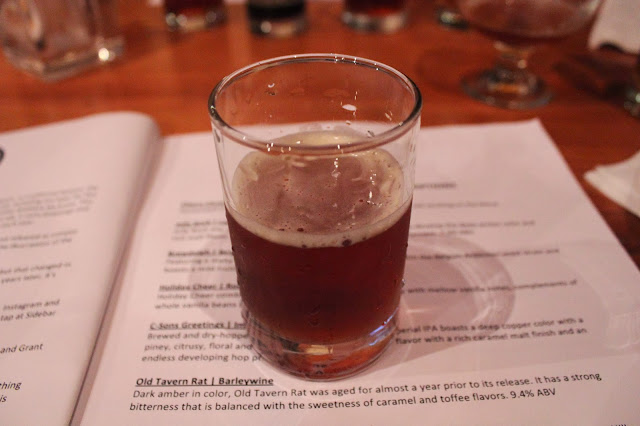 Old Tavern Rat | Barleywine
A dark amber colored barleywine that was aged for almost a year prior to its release, it has a strong bitterness that is balanced with the sweetness of caramel and toffee flavors. 9.4% ABV 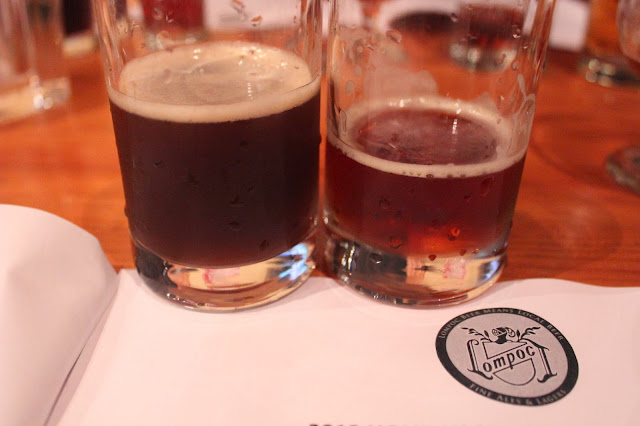 Bourbon Barrel Aged Old Tavern Rat | Barleywine
Brewed in December 2011, aged in Heaven Hill Bourbon barrels for 22 months and cellared for an additional two months, this dark amber colored barleywine has soft oak character with raisin and fig notes. 9.7% ABV
(The bourbon barrel aged one is on the left compared to the normal Old Tavern Rat on the right–you can really see the difference in color!) 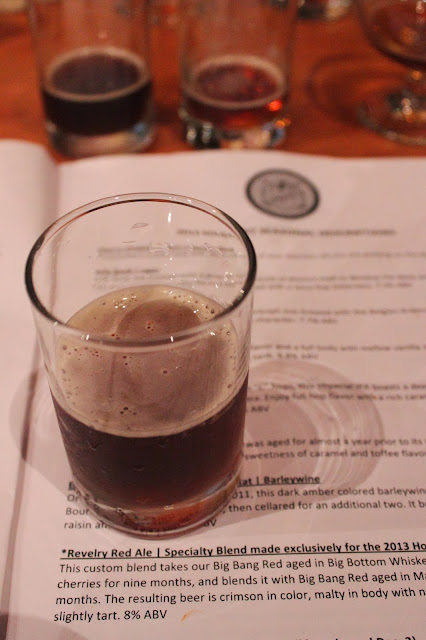 Revelry Red Ale | Specialty Blend for the 2013 Holiday Ale Festival
This custom blend takes our Big Bang Red aged in Big Bottom Whiskey barrels with 80 pounds of sour cherries for nine months & Big Bang Red aged in Maryhill Winery Port barrels for 11 months. The resulting beer is crimson in color, malty in body with notes of cherry and oak, and finishes slightly tart.  8% ABV
The final beer we got to try (which was probably my favorite of the bunch!) is actually going to be featured at this weekend’s Holiday Ale Festival in downtown Portland. That’s right, Portland has an entire festival specifically dedicated to holiday beers! Pretty cool, right? The festival actually starts today and runs through Sunday; I’ve never been but I am hoping that we have time to check it out this weekend. It looks like it’s going to be a great time with lots of really unique holiday beers! 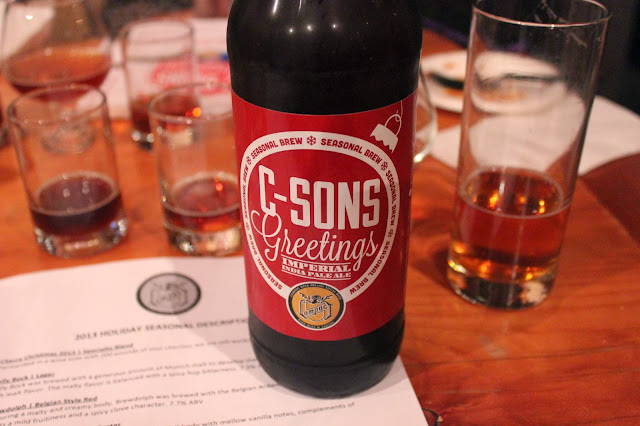 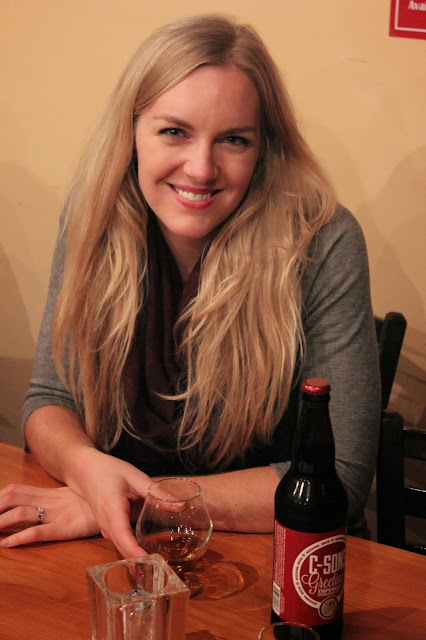 Lompoc Brewing was nice enough to give everyone who attended this holiday preview tasting a bottle of the C-Seasons Greetings Imperial IPA (much to Cam’s delight) and I genuinely enjoyed all the beers we sampled. Definitely look for their beer at the Holiday Ale Festival this weekend and be sure to stop in one of their Portland locations to try out all of these fantastic seasonals!
Cheers to the holidays!