The 71st Annual Golden Globes aired last night and so awards season is officially under way!
It’s one of my favorite times of year because I love seeing all the gorgeous fashions on the red carpet. I particularly like the Golden Globes because it includes both movies and television, plus it’s much more laid back (and usually more entertaining) than the Oscars. I actually watched the pre-show coverage plus the whole show (easier to do since it comes on three hours earlier on the West Coast!) and as always, I thought there were some highs and lows on the red carpet this year.

One thing I wanted to mention first is that I think the tough part about sharing awards show fashion favorites is that when you see someone wearing a dress on television, often it looks much different than it does in a photo. I’m basing my choices on what I thought of each look when I saw it on TV last night, and not just on the photos below – just FYI!

Even though it’s the “Golden” Globes, silver seemed to be a really big trend on the red carpet last night, and quite a few of my favorite looks fell into this category… 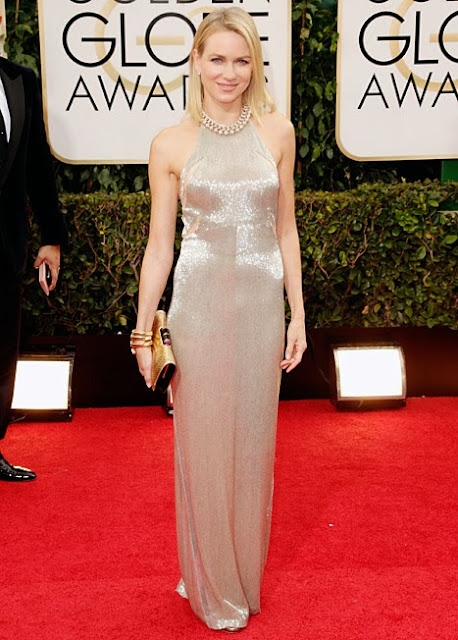 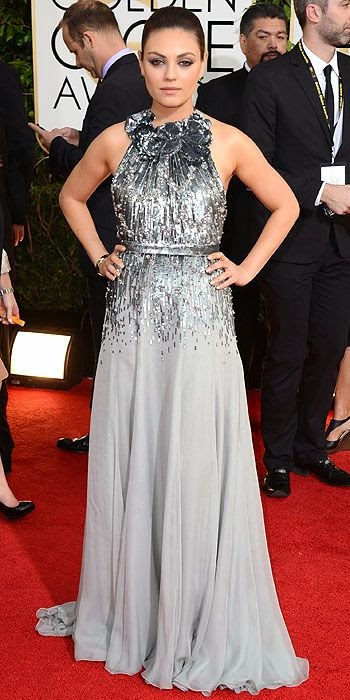 I thought Mila Kunis looked lovely in this Gucci halter, it’s so ornate and gorgeous! 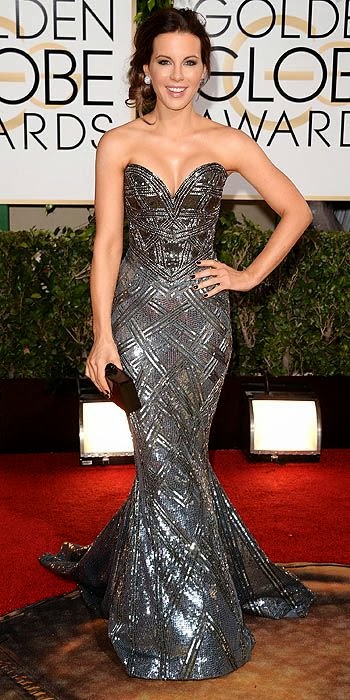 Loved Kate Beckinsale in Zuhair Murad, and I swear, she does not age ever! 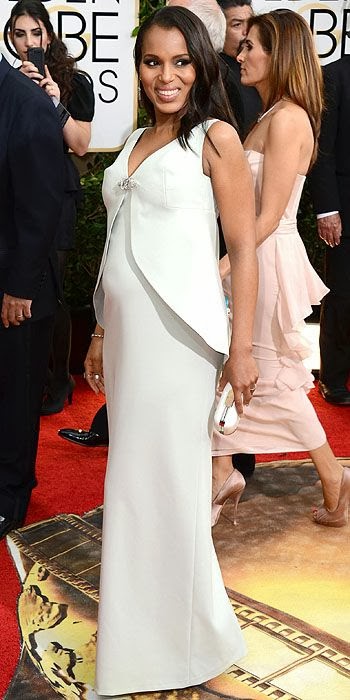 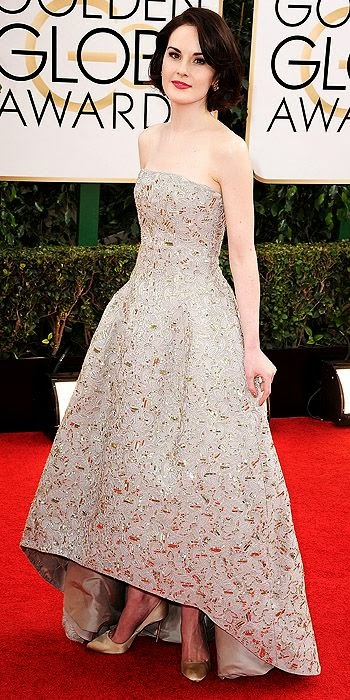 Michelle Dockery in a beautiful Oscar de la Renta, which was actually silver and gold 🙂
Variations on classic black were also very big this year as well… 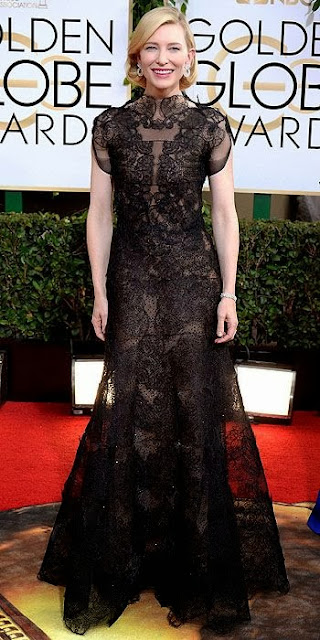 I loved Cate Blanchett’s lace Armani gown, and she was one of my favorite overall looks of the night. This is one of those dresses that I thought looked much prettier when they were interviewing her on the red carpet vs. in this photo. It was so beautifully detailed and intricate and quite sparkly! 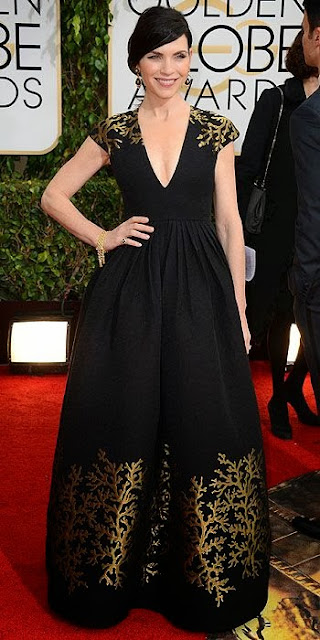 I really liked this Andrew Gn gown that Julianna Margulies wore! It was elegant and a perfect choice for her, but I’m also a big fan of The Good Wife so that’s probably another reason for this pick 🙂 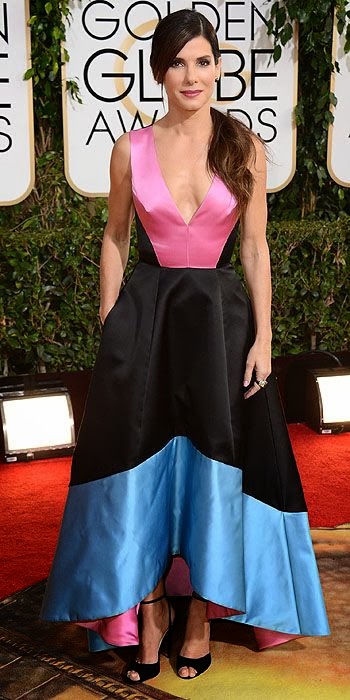 Walking the line between classic black and fun color, I thought Sandra Bullock looked so gorgeous in Prabal Gurung. This was a really fun look that’s perfect for her and very appropriate for the Globes vs. the Oscars, in my opinion. She’s another person that doesn’t seem to ever age!
Using Sandra Bullock’s dress as a segway, there was a wide range of colored gowns on the red carpet last night as well – here are a few of my favorites! 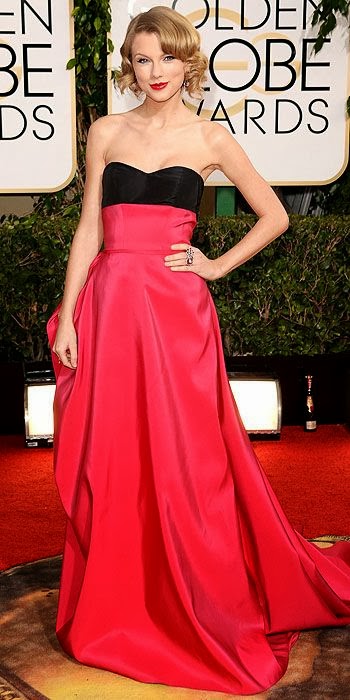 Gotta give props to my girl Tay – she totally went for Old Hollywood glam in this red Carolina Herrera! 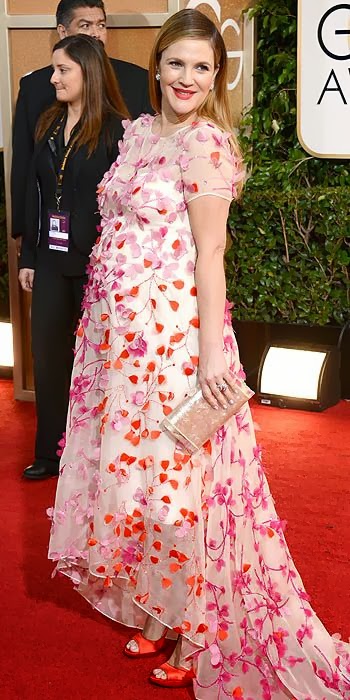 I personally thought that this Monique Lhuillier looked adorable on mom-to-be Drew Barrymore because it just seems so happy and whimsical, absolutely perfect for her.
(Also, the hi-low dress trend was clearly still going strong last night!) 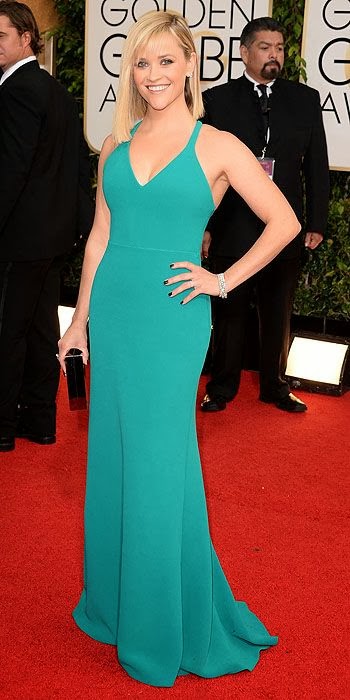 I thought Reese Witherspoon looked fantastic in Calvin Klein; it was a really different, mimimalist look for her and the aqua color was really unexpected. I thought it was just perfect on her and I love how simple yet stunning this dress is. (Didn’t love her hair though – her bangs were in her eyes all night!) 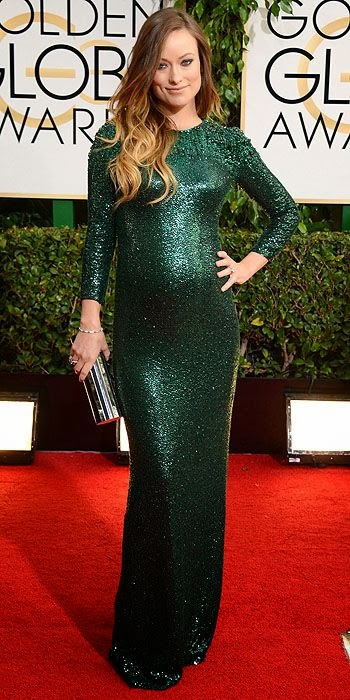 Another mom-to-be whose look I loved from last night was Olivia Wilde in Gucci. 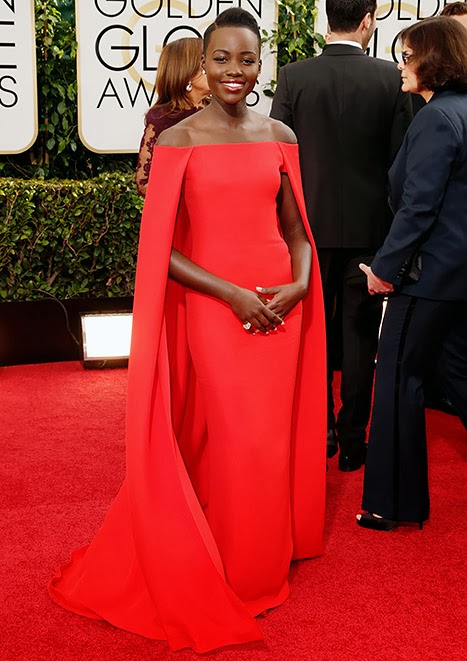 And I can’t forget the dress that everyone was talking about, Lupita Nyong’o looked STUNNING in this red Ralph Lauren gown. I think it’s rare for someone to make such a dramatic choice like this and have it work so well. The dress is so simple yet makes such statement and it’s so striking against her amazing skin. (Holy alliteration…) Honestly, I think it was my favorite look of the night! 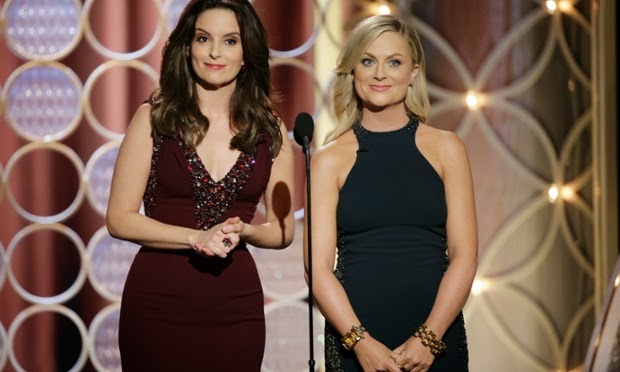 My runner up for best look of the night goes to Tina Fey in the burgundy dress she wore to open the show – she looks fantastic! That dress looked awesome on her, her hair looked fab, and the color is perfect on her! (I liked Amy’s picks as well, I just though that Tina’s dress really stood out!)
Even though I liked quite a few looks from last night, there were a few that weren’t my cup of tea… 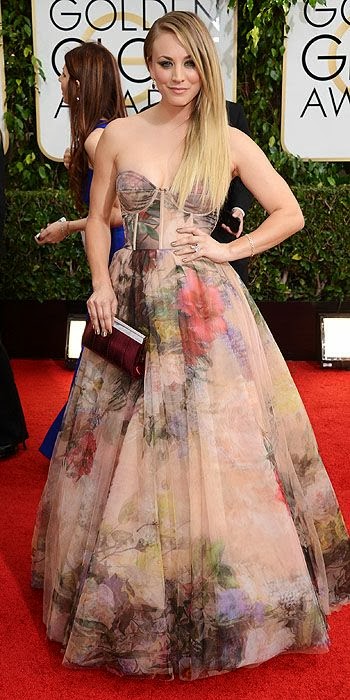 So I love The Big Bang Theory but I did not like this look on Kaley Cuoco at all. She seems like she typically gravitates towards this princess-ballgown type of silouhette on the red-carpet, but since she just got married and wore a big pouffy pink dress, I was really hoping she’d pick something totally different for the Golden Globes, like something sleek or modern. I’m not a big fan of her hair either and feel like the whole thing just doesn’t work. 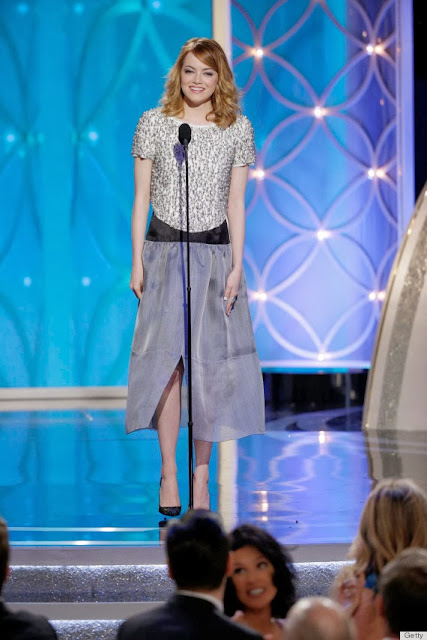 Emma Stone didn’t appear on the Golden Globes red carpet, but she did present an award in a Chanel dress that I really did not care for. And was it just me or did she look incredibly thin, like way thinner than normal? Maybe it was just because the dress was so shapeless…but it’s a shame because she’s gorgeous and I usually like her adventurous fashion choices! (And apparently I’m not the only one who wasn’t a fan of her Globes look!) 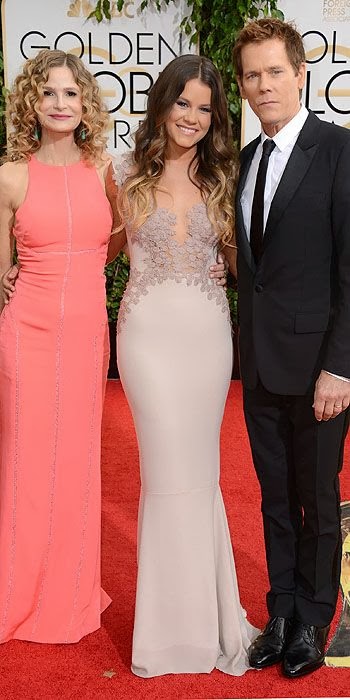 Kyra Sedgwick and Kevin Bacon’s daughter Sosie was Miss Golden Globe and honestly, I didn’t love the dress she chose. It looks okay in this picture, but seeing it on TV I didn’t really care for it and thought she would have looked better in something a little more flattering. 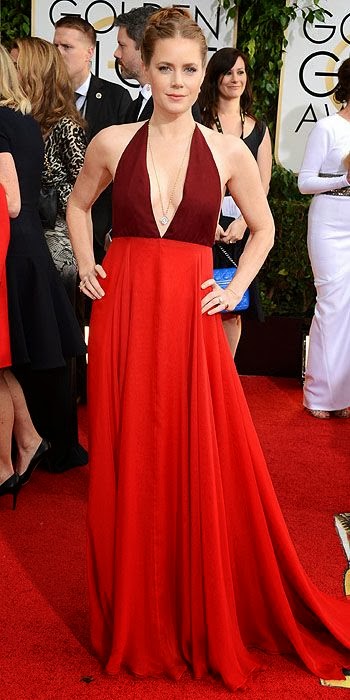 I didn’t hate Amy Adams in Valentino, but I didn’t love it either. I just thought the whole look was sort of forgettable and that she could have made a much better choice. Her hair and makeup were somewhat blah and while I like the color of the dress, I feel like it just doesn’t do much for her. 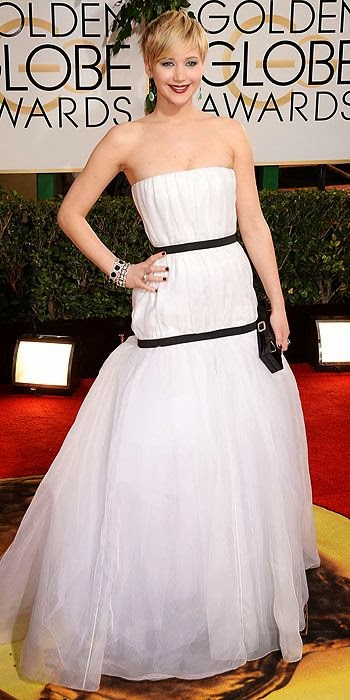 And last but not least, I thought J.Law’s look was the night’s biggest disappointment. While I didn’t hate this Dior Haute Couture gown, I just thought it was kind of weird and unflattering, which is a shame because I love her! I like the black and white, but I just thought the bands didn’t work as well in execution as in theory. I think that I had really high hopes for her and Amy Adams last night and I felt like they both chose kind of mediocre options. Hoping they both step it up for the Oscars!
What about you, did you watch last night? Whose look did you like best?